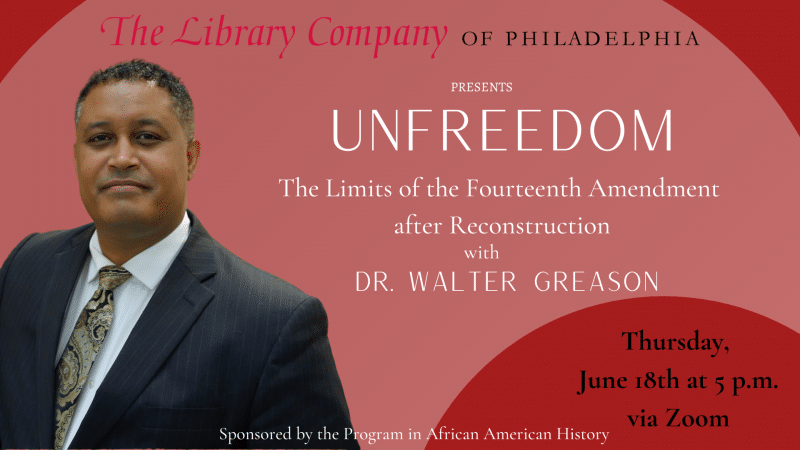 Unfreedom: The Limits of the Fourteenth Amendment Under Reconstruction will discuss race in the twentieth century as a specific form of ideological technology. Focusing on the events and voices between Reconstruction and the Civil Rights Movement, Dr. Walter Greason will lead a discussion about the economic, political, social, and cultural foundations of white supremacy as products of an emerging industrial order. From the regimentation of the plantation in the early nineteenth century through the rigidity of commodity and financial markets at the start of the Cold War, this talk will illuminate the networks that led to entrenched inequality for more than a century. Join us for this powerful presentation followed by a moderated Q&A session.

Dr. Walter D. Greason is an Associate Professor and Chair of the Department of Educational Counseling and Leadership at Monmouth University in West Long Branch, New Jersey. Dr. Greason’s research focuses on the comparative, economic analysis of slavery, industrialization, and suburbanization. With a variety of co-editors, Dr. Greason has published Planning Future Cities(2017) – an innovative look at architecture, urbanism, and municipal design; The American Economy (2016) – a provocative examination of race, property, and wealth in the United States since 1750; and the Afrofuturist design textbook, Cities Imagined. His scholarly monograph, Suburban Erasure, won the Best Work of Non-Fiction award from the New Jersey Studies Academic Alliance in 2014. He also won grants from the Mellon Foundation (2011) and the National Endowment for the Humanities (2016). He is also the creator of the #WakandaSyllabus. The subsequent series of essays can be found on the award-winning website, Black Perspectives.

This event is sponsored by the Program in African American History