From Common Touch : The Hostetler Family of Blind Musicians

Beginning in April 2016, the Library Company will host Common Touch, a multimedia and sensory exhibition curated by artist Teresa Jaynes. Generously funded by the Pew Center for Arts & Heritage, the exhibition inspired by historical embossed and raised-letter documents for the visually impaired will explore the nature of perception. The following is a shared blog post from the Common Touch website, where in anticipation of the forthcoming exhibition we have been showcasing relevant items from our historical collections documenting the blind and other communities with disabilities. 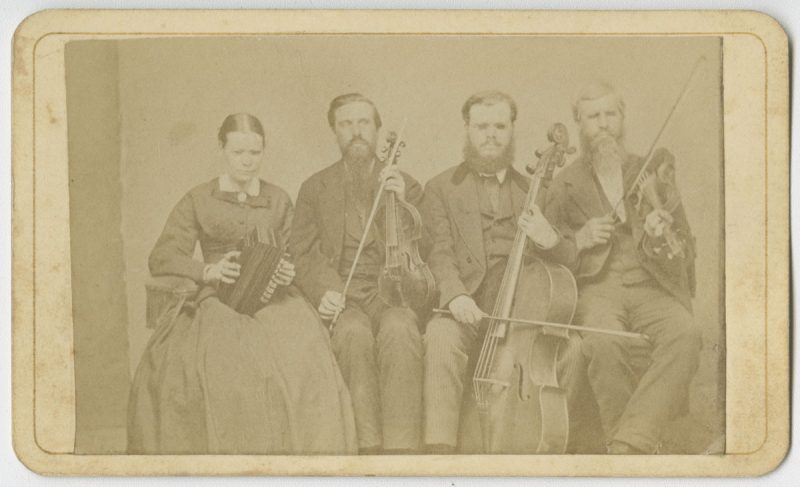 Picture shows one woman and three men, seated next to each other, and holding instruments. The woman holds an accordion in her lap and she looks slightly down. To her left is a man, his eyes closed, who holds a viola perpendicular to his lap with one hand and a bow in his other. To his left is a man resting a cello between his legs. He holds a bow across the base of the cello with his right hand. To his left is the last man, his eyes closed, who holds a violin by his left shoulder and a raised bow in in his right hand. The woman, as well as the man who holds a cello, wear glasses. The woman wears a dark dash colored corseted dress with long sleeves and a long skirt. The men, who look toward the viewer, are bearded and wear dark dash colored suits.  [End of description]

This circa 1866 carte-de-visite photograph of the musical Hostetler family represents a thread in the seams of the complex history of the representation of blind musicians in popular culture. Known in their local Fayette County, Pennsylvania newspapers as the “Blind Family,” the Hostetler siblings Catherine (1835-1890), Bartholomew (1845-1908), Jesse Samuel (1842-1923), and John Hostetler (1829-1911) were five of eight children born to their parents blind or visually impaired. The Hostetlers traveled throughout Western Pennsylvania performing in churches, schoolhouses, and the like, and by the early 1870s, were managed by their agent Prof. Buchinal.

The siblings appear to have received no formal music training. Nonetheless, such instruction was often strongly advocated by 19th-century educators of the blind, like Samuel G. Howe. Howe, director of Perkins School for the Blind in Massachusetts, strongly urged music education over handicrafts for his students. In 1833 he wrote “The accuracy of the ear gives to blind persons a very great advantage in music; they depend entirely upon it; …” This rationale supported his stance that playing and teaching music necessarily provided the blind with a more realizable livelihood based in excellence than handicrafts. For Howe, the sighted could not help but excel in the latter trades, but not so in music.

With music and public performance as their profession, the possibility of the Hostetlers’ exploitation cannot be overlooked. This most respectfully posed portrait could still be seen as an object of curiosity at the time it was taken as well as today. Did those who acquired the image want it as a souvenir of the singing talents of the Hostetlers or the novelty of a blind family of singers? Such questions raised by the photograph cannot help but challenge the viewer about their understanding of the role that music played in the education, portrayal, and life of individuals who were blind in the 19th century.

Musings on Time and Place: The Marriott C. Morris Collection

“That’s So Gay” (the online version) – Launched
Scroll to top