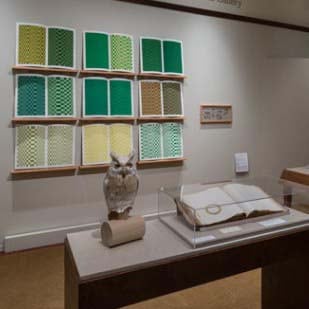 Common Touch: An Artist’s Multi-Sensory Exhibition Exploring the History of the Education of the Blind at the Library Company of Philadelphia

A version of this post was originally published on the Mid-Atlantic Regional Center for the Humanities blog on May 16, 2016. 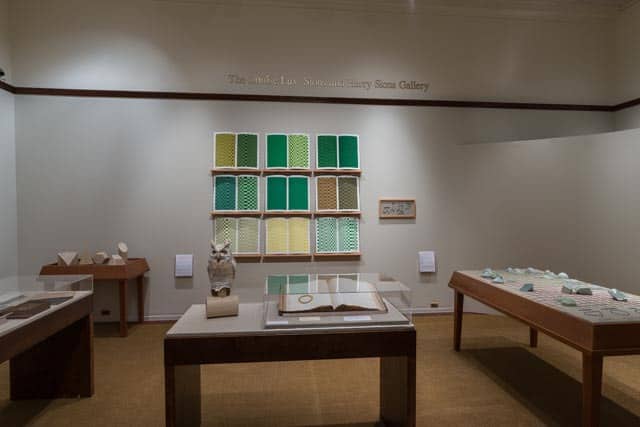 As the co-director of the Visual Culture Program (VCP at LCP) at the Library Company of Philadelphia, the collections with which I work daily document the visual construction of history. In preparing for our current VCP exhibition, Common Touch: The Art of the Senses in the History of the Blind, the experience has purposefully challenged my conceptions of the privileged role of vision in visual culture studies. Funded by the Pew Center for Arts & Heritage, the multi-sensory exhibition on display through October 21, 2016, is an unconventional and benchmark one for the Library Company. Curated by Philadelphia artist Teresa Jaynes, the installations, inspired by the Michael Zinman Collection of Printing for the Blind, explore the history of the nineteenth-century education of the blind and the nature, foundation, and limits of perception. 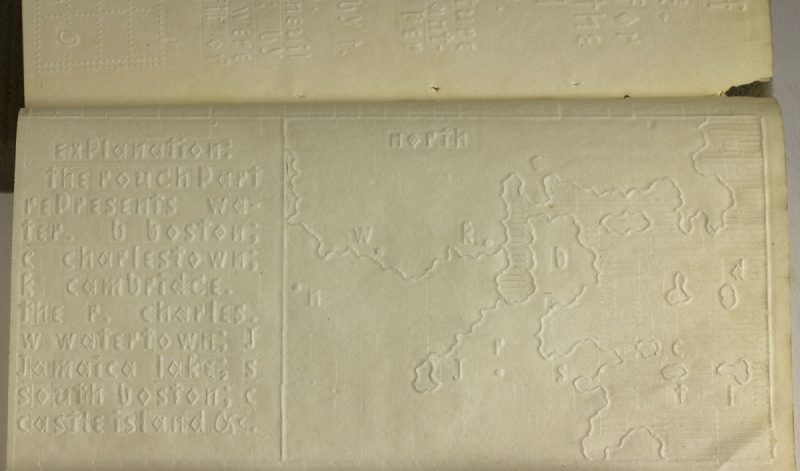 Embossed map of Boston in Fifth Annual Report of the Trustees of the New-England Institution for the Education of the Blind, to the Corporation (Boston, 1837). Michael Zinman Collection of Printing for the Blind.

The Zinman Collection, the core of the Library’s printing for the blind holdings, contains primarily nineteenth-century raised and embossed printed texts and ephemera. Raised images of maps, scientific diagrams, and musical scores often comprise the texts that range in subject matter from natural history to religion, music, and literature. The collection also contains nineteenth-century personal narratives and textbooks, as well as reports, pamphlets, and magazines issued by educational institutes for the visually impaired, such as the Pennsylvania Institution for the Instruction of the Blind.

Printed throughout the Victorian era in several styles denoted as alphabetical or arbitrary, raised-print materials embody a rich and complex history. By the mid-nineteenth century, alphabetical systems mimicking Roman letters (e.g. Philadelphia line) predominated in the United States over arbitrary-denoted systems of dots and symbols (e.g., braille). While produced to serve as tools to educate through touch, the line systems still fostered an embodied culture of looking that inevitably privileged sight for their presumed sighted teachers. In 1932 authorities accepted Standard English braille as the uniform reading system for the blind in the United States. Line types faded into obscurity and are the shadows of the visual culture of the sighted and those who are visually impaired. 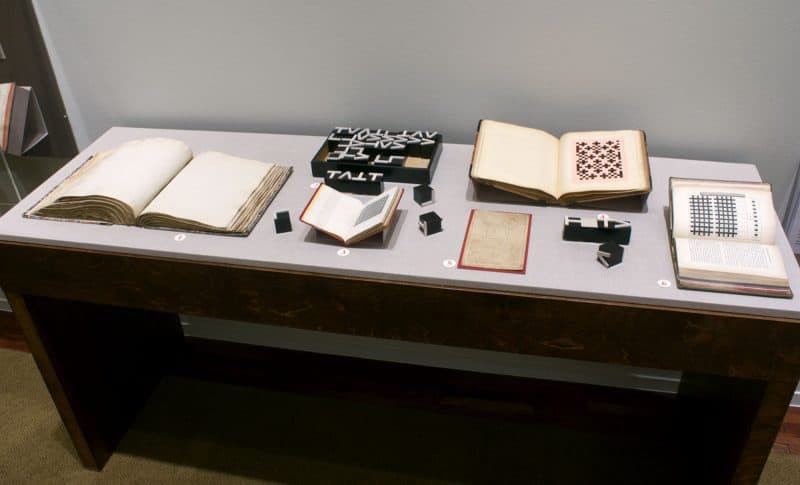 Case of historical materials related to mathematics and natural history in the nineteenth-century education of the blind. Complements Teresa Jaynes, Gift #5, 2016. Photo by Concetta Barbera.

The overall concept of Common Touch examines variable natures of perception in relation to the history of the education of the blind. Visitors explore an exhibition with installations informed by historical first-person narratives and abstract and geometric forms—the style of active learning tools, often influenced by the Froebel educational system—used in curricula at schools for the blind.

Jaynes’s works, named in homage to the Froebel tools known as Gifts, engages four of the five senses—sight, sound, hearing, and smell. Among the seven installations, visitors interact with Gift #4, a series of nine silkscreen printed patterns representing a visual transmutation of  the noted 1880 composition March Timpani by Victorian African American blind musician Thomas “Blind Tom” Wiggins; Gift #5, a topographic map with a key of porcelain geometric forms and embroidered grid that represent the travels of the prominent eighteenth-century English blind surveyor John Metcalf;  Gift #6, an olfactory mechanism that immerses visitors into a cocoon of sound and scent conveying micro-narratives of the lives of Metcalfe and Wiggins; and Gift #7, an artist book of raised prints after embossed diagrams of snowflakes in the Perkins’ School for the Blind adaptation of  the 1845 science text The Rudiments of Natural Philosophy.

Integral to the creative process for Common Touch was Jaynes’s Vision Council. These advisors have experienced varying degrees of vision loss at different stages of life, and Jaynes incorporated their professional and personal experiences into the design and concepts of the exhibition through its granular historical themes. The artist-curated exhibition also hearkens back to the nineteenth-century inquiries about the hierarchy of the senses, vision, and the means to knowledge explored by optics scholars such as Charles Wheatstone, as well as brings into physicality the arguments of contemporary scholars examining the sensory turn of visual culture.

Without the touch element provided by Jaynes’s works, essential to the artistry of the exhibition, the aura of the original prints, forms, and devices on which they are based would be impotent. This essential element to the exhibition design connects the visitor with the multiple under-recognized and hidden histories represented by the collection material on display, which inspired the exhibition itself. The accessibility of Jaynes’s art works transfers to more transparent access to such hidden histories of the raised printing process, as well as the education of the blind in the nineteenth century and the historical collections documenting the role of persons with visual impairments in society.

Through this immersion, Jaynes’s art serves as a bridge to appreciate what disability does, not just what it is, as proposed by disability studies scholar Amanda Cachia. Cachia served as curator of Haverford College’s Hurford Center’s 2012 art exhibition What Can A Body Do? In describing this curatorial work in the 2014 Disability Studies Quarterly, Cachia states she purposefully strove to avoid the possible pitfall of reductionism that assumes all people with disabilities have the same experience. Similarly, Jaynes’s multi-sensory exhibition is grounded on the non-homogeneity of experience more typical of art, as opposed to special collections exhibitions. Common Touch profoundly facilitates that no two visitors have the same experience by privileging the embodied culture of looking in an exhibition that intersects art, historical collections, and disability studies. 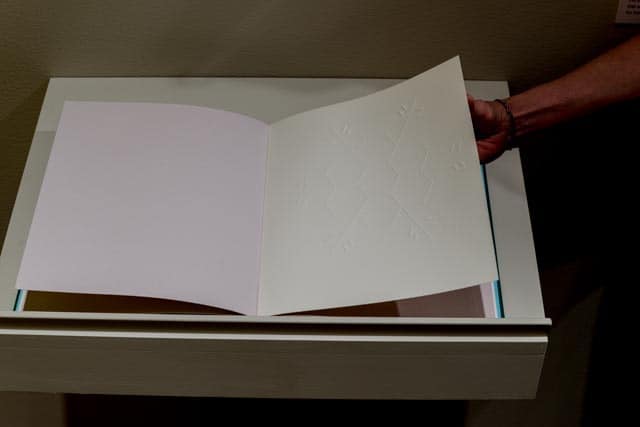 This embodied culture of looking is evoked through the disabilities of blindness and visual impairment that underlie the artistry inherent in the embossed prints, teaching tools, and sculptural forms that are on display. This “touch art” of the present and past iterates the genesis and perpetuation of kinesthetic experiences that powerfully acknowledges disability as intrinsic to their creation. Consequently, the Library Company works on display abstractly exemplify what disability aesthetics scholar Tobin Siebers acknowledged for artists as  “the discovery of disability as a unique resource, recouped from the past and re-created in the present, for aesthetic creation and appreciation” (Siebers, Disability Aesthetics, 2010, 5). Jaynes’s art serves as an equalizer and even a redefinition of disparate but complementary sensory experiences with archives. The archival material has not only been transformed into art but is often art itself.

As discussed, Cachia, the curator of What Can A Body Do?, wrote of her experience curating her kindred in nature exhibition to Common Touch. With her co-authors and fellow disability studies scholars Kristin Lindgren and Kelly George, they concluded disability studies develop through disorientation, defamiliarization, and destabilization. The Library Company exhibition, a transdisciplinary expression of art, disability studies, and historical collections, similarly destabilizes cultural assumptions about seeing, the history of blindness, and the literal and figurative untouchability of historical collections. Internal and external dialogues about our evolving connotations of sight are cultivated while the perception that the Library Company is inaccessible, as a special collections library, is challenged.

Mellon Scholars Program: “Obscure details” and the Pursuit of H...
Scroll to top