This is the first of a series of blog posts by Library Company staff about their favorite things in the collection.  Picking a favorite book is like picking a favorite child, except that we have half a million to choose from.  But here goes. 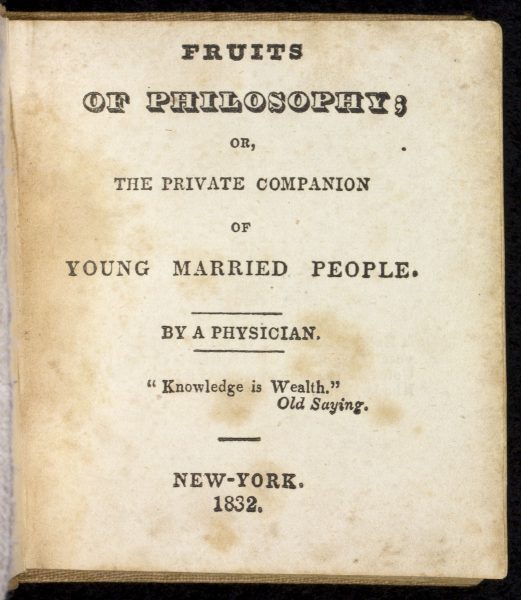 Charles Knowlton’s Fruits of Philosophy; or, the Private Companion of Young Married People (New York, 1832) is the first edition of the first popular manual on birth control and the first book on the subject by a physician. While earlier books had advocated birth control and even hinted at various methods, Knowlton was the first to describe in detail all the known methods and to discuss their pros and cons in practical and medical terms. He advocated douching with cold water or with various solutions of alum or vinegar, which was “sure, cheap, convenient, and harmless,” and had the added advantage of putting control over contraception in the hands of women, where he insisted it should be for both medical and political reasons.
Knowlton was also one of the first to understand the full impact that widespread knowledge of birth control would have on society. As historian Helen Horowitz wrote, “Fruits of Philosophy is a path breaking work … To the traditional insistence of moralists that humanity not engage in sexual relations beyond what is needed for health or procreation, Knowlton countered, ‘Mankind will not so abstain’. Sex and sexuality, he said, must move out of the realm of morality into that of physiology.” 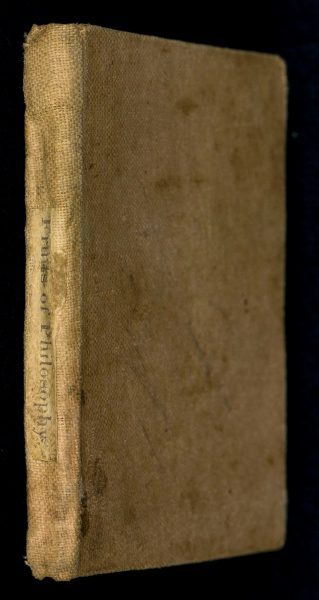 For putting these ideas into print, Knowlton was prosecuted for obscenity three times between 1832 and 1834, once drawing a three-month jail term in Cambridge, Massachusetts. He published four editions between 1832 and 1839, each revised to respond to his critics, by which time the book had been almost entirely rewritten. All subsequent editions were based on revised versions. The first edition is known in only two or three copies and it has never been reprinted.
As remarkable as this book is for its content and for its impact on society, its material form is even more remarkable. It is tiny, 3 by 2 1/2 inches, a format up to that time used mainly for miniature abridgements of the Bible. Our copy is bound it its original beige cloth with a printed paper label, in near pristine condition. This format made the book private (as the title has it), easy to conceal under the counter, on one’s person, and while reading. In fact it is so small and delicate that it is hard to turn the pages. There is no other book quite like it. 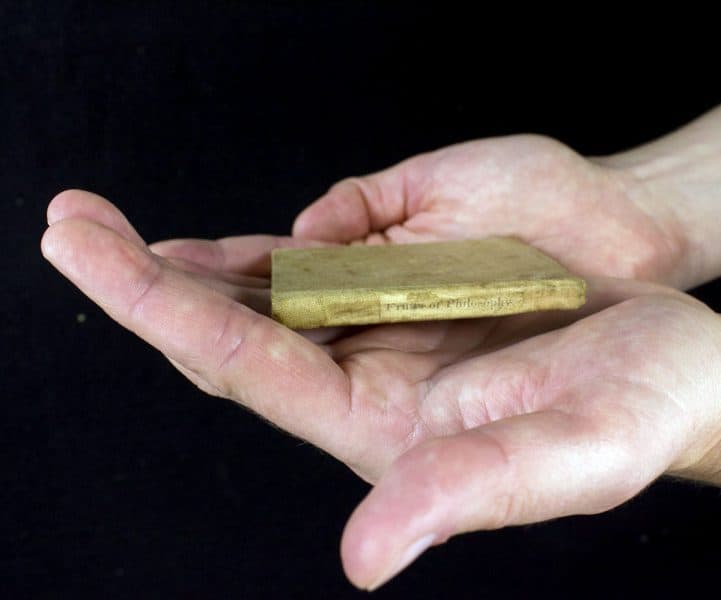 We acquired it in 2005 in honor of Charles Rosenberg, and with his help. Dr. Rosenberg has taught the social history of medicine at Penn and Harvard, and he is a pioneering collector of popular health books, many thousands of which he has donated to the Library Company. Like all collectors, his favorite book is the one he just got, and the one he regrets the most is the one that got away. For Dr. Rosenberg, the one that got away was Fruits of Philosophy. He passed up a copy of a third edition long ago when he was a young professor because it was just too expensive. We bought this New York, 1832, edition for him thinking it was the second, but on closer examination and by comparison with other copies, we realized it was the first. That was just one more reason to love this little book that changed the course of history.
James Green
Librarian
The Library Company of Philadelphia
1314 Locust St., Philadelphia, PA 19107
TEL 215-546-3181 FAX 215-546-5167
http://www.librarycompany.org
September 18, 2013
https://librarycompany.org/wp-content/uploads/2015/06/lcp_print.png 0 0 nscalessa https://librarycompany.org/wp-content/uploads/2015/06/lcp_print.png nscalessa2013-09-18 16:37:002021-12-08 11:25:20A Few of Our Favorite Things, Part One: Charles Knowlton’s Fruits of Philosophy
GlobalPhilly 2013These Are a Few of Our Favorite Things
Scroll to top