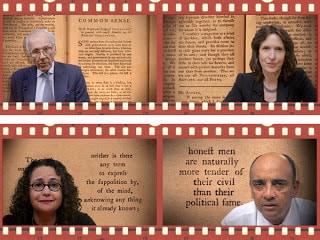 Since 2009, the Library Company has been assisting documentary filmmaker Rick Feist with a project entitled Thomas Paine: Revolution in America, which explores the life and writings of Founding Father Thomas Paine. Paine’s revolutionary writings inspired Feist to create a documentary to educate viewers about the contemporary relevance of his ideas. The film includes readings of poignant passages from Paine’s works by prominent individuals, including Lewis Lapham, Katrina vanden Heuvel, Brooke Gladstone, and Kwame Anthony Appiah. 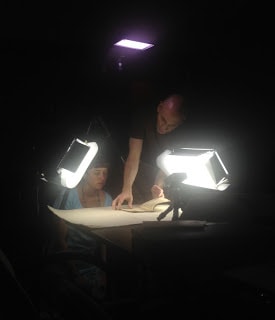 Feist has been conducting regular photo shoots at the Library Company to collect images from original editions of Paine’s writings, as well as contemporary illustrations. He is moved by the thought that the imprints from our stacks were read and handled by Library Company members and patrons over the course of almost 250 years since they were first published. Feist says he “hopes that the film can convey a sense of the awesome beauty of these historic pamphlets and newspapers. These words in these very printings changed the world. They are inspiring treasures, particularly in this world of ubiquitous electronic media.”

A Few of Our Favorite Things, Part Four: Learning from a Damaged Book, Margarita...