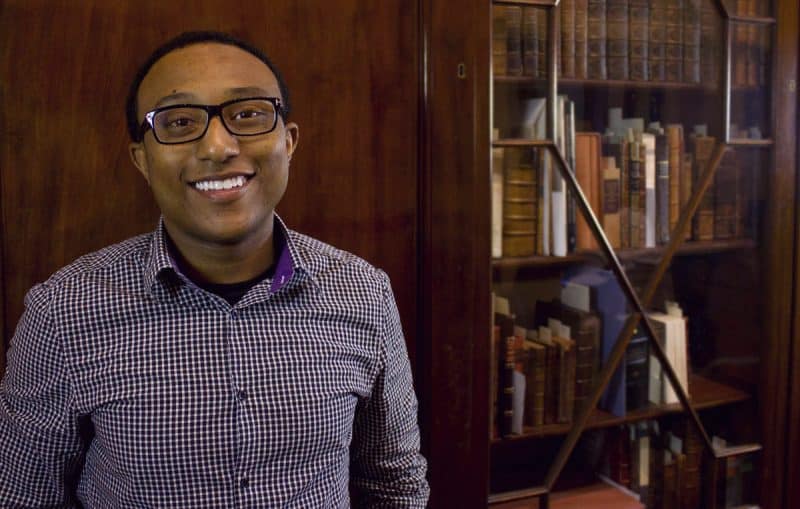 In a series of occasional blog posts, participants in our Mellon Scholars Internship and Workshop programs will introduce themselves, discuss their experiences at the Library Company, and share their goals for pursuing careers in the field of early African American history. This program is generously funded by the Andrew W. Mellon Foundation.

The Mellon Scholars Program just completed its fourth year offering a month-long internship transforming students’ passions for African American history into potential careers. This year, the internship ran from June 5 to June 30. The program operates within the walls of the Library Company of Philadelphia with the support of the Mellon Foundation and LCP’s Program in African American History. My name is Dr. Michael Dickinson, and I work as the program’s coordinator along with program director Dr. Erica Armstrong Dunbar. Together we work to help familiarize interns with the process of archival research, expand their knowledge of African American history, and give them the tools required to pursue academic careers.

From the inception of the Mellon Scholars Program, we have had the privilege of working with talented students enthusiastic to learn, and this year was no exception. We had two interns join us this year: Abi Bernard and Ashley Council. Abi is an undergraduate student at Cornell University, while Ashley is a master’s student at Morgan State University. These two bright students embarked on an extensive intellectual journey throughout the month. A portion of their time spent at LCP was dedicated to a transcription project. Abi and Ashley transcribed minutes for the Colored Conventions Project (CCP), an initiative housed at the University of Delaware under the guidance of UD professor Dr. Gabrielle Foreman. The project seeks to uncover and utilize the records of conventions held by African American activists throughout the nineteenth century in order to reveal historical black discourses and networks of activism. In addition to the transcriptions, the interns also searched LCP collections to catalogue the minutes held by the Library Company. Lastly, Abi and Ashley worked to search, label, and contextualize a number of LCP images related to the Colored Conventions. While providing students with invaluable transcription and research skills, the tasks also exposed the interns to historical debates among black activists.

In addition to their work with CCP, the two interns devoted substantial effort into producing individual research projects germane to their personal interests. Abi, who was born in Haiti, entered the program desiring to learn more about early African American activism and the Haitian Revolution. Her project combined these two interests. Abi’s research topic examined how black activists in the urban North envisioned migration to Haiti in the nineteenth century. Ashley arrived with an interest in studying black women’s struggles to negotiate lived realities of sexual violence and oppression. Her work in the LCP archives revealed the understudied story of Alice Clifton, an enslaved woman in Philadelphia who suffered sexual exploitation and unspeakable horrors. Ashley’s project used Clifton’s story as a window into the racial and gendered burdens of enslavement and oppression. In pursuing the two topics, the interns each worked to produce a final paper suitable for use as a graduate school application writing sample. Moreover, their projects culminated in a formal colloquium held on the final day of the program where the students presented their research findings and received feedback from the audience. Both Abi and Ashley produced deeply impressive projects using the rich archival materials held at the Library Company. I would like to thank the staff, especially Clare Lowry, Connie King, Dr. Michael Barsanti, Charlene Knight, and all of the LCP staff for their help throughout the internship. But most importantly, I thank these wonderful Mellon Scholars for making me, Dr. Dunbar, and the Mellon Scholars Program so proud!