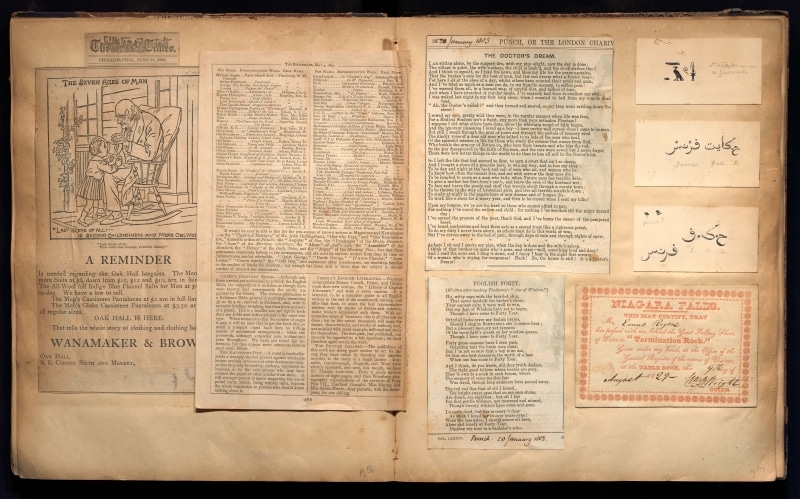 For my summer internship in the Graphic Arts Department, I was tasked with cataloging the recent 2021 donation of materials about the Wood and Furness families of Philadelphia. Though you might not be familiar with those names, I can guarantee that you are familiar with many of their contributions to this area. The Wood family is responsible for the establishment of the much-loved convenience store chain Wawa, which they still own to this day. George Wood (1842-1926) started a milk processing plant in 1902, an offshoot of the family’s textiles Millville Manufacturing Company, which sold “doctor certified,” home-delivered milk and it quickly grew popular. Wanting to continue that success in the changing market, the grandson of George Wood, Grahame Wood (1915-1982), opened the first Wawa food store in Folsom, Pa. in April of 1964, which developed into the well-known regional chain.

Although the Furness family does not have its own Wawa-type firm, they were also incredibly influential in the development of Philadelphia, particularly in the fields of arts, literature, and education. The Furness family supported the development of the University of Pennsylvania Library (now the Fisher Fine Arts Library) as well as the Helen Kate Furness Library. The family also left a mark in literature through several prominent literary works such as the Shakespeare Variorum edition edited by Horace Howard Furness (1833-1912) and Annis Lee (Furness) Wister (1830-1908)’s German-to-English translations of E. Marlitt’s Gold Elsie and Adolf Streckfuss’s Castle Hohenwald: A Romance. What stood out to me most during my time cataloging these families’ materials were the contents of three scrapbooks made by Horace Howard Furness.

Horace Howard Furness was a prominent Shakespearean scholar and the son of Rev. Dr. William H. Furness (1802-1896), a revered Unitarian preacher, theologist, and reformer. H.H. Furness’s developing literary career and scholarly interests are apparent in the first scrapbook with content ranging in date from the 1850s to the 1880s (Fig. 1). Its pages are filled with newspaper clippings of poems, lectures, and essays from authors and professors such as Irving Browne (1835-1899), William Webb Follett Synge (1826-1891), William Makepeace Thackeray (1811-1863), Benjamin Jowett (1817-1893), and William D. Gunning (1828-1888). These lectures and essays range in topics from theology, philosophy, and social theories to biological sciences. Also included in the scrapbook are hotel brochures, business and travel cards, and handwritten notes. Some of these handwritten notes are letters from scholarly friends and connections, but most are notes written by H.H. Furness himself not only in English, but also in French, German, Latin, Egyptian hieroglyphics, and Persian. The contents of this first scrapbook reveal the primary concerns of young H.H. Furness during this time in his life: focusing on his own education and career, developing his interests, and traveling to expand his worldview. There are fewer mentions of family members in this first scrapbook compared to the following scrapbooks. 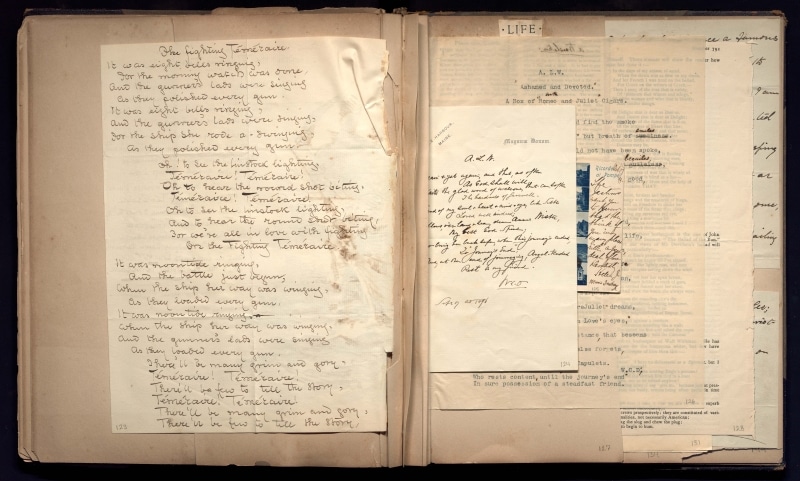 In contrast with the first scrapbook, the second scrapbook, with material ranging in date from the 1860s to the 1890s, contains far fewer newspaper clippings of poetry and far more handwritten poems, notes and letters written by and to H.H. Furness. Furthermore, there are missing clippings and pages with large sections cut out throughout the scrapbook. Many of the poems included are translations done by Annis Lee Wister, H.H. Furness’s sister, who married Caspar Wister (1818-1888) in 1854. She had sent her translations to H.H. Furness for final revisions and to show him her work. Several other people also sent H.H. Furness snippets of their work (handwritten and typed) that he would proofread, evident in the revision marks made on the pages. In addition to his sister’s work, H.H. Furness also included news articles on his other siblings, primarily Frank H. Furness (1839-1912) who was a successful architect and a captain during the Civil War as well as the designer of the Cassatt House, now used by the Library Company of Philadelphia. The second scrapbook also includes many letters from Francis “Fanny” Kemble (1809-1893), a British actress and writer whose tumultuous marriage to Pierce Mease Butler produced one of her most well-known works and the fierce abolitionist text, Journal of a Residence on a Georgian Plantation in 1838-1839. Fanny Kemble became connected to H.H. Furness through their mutual love and endeavors with the works of Shakespeare as well as through a distant family connection—the marriage of Owen Jones Wister, the younger brother of Caspar Wister (Annis L. Furness’s husband), and Sarah Butler, Fanny Kemble’s eldest daughter.

Within the content of the second scrapbook, it becomes clear that H.H. Furness is entering a different era of his life than the one encapsulated in the first scrapbook. He and his siblings are becoming established in their fields, and his focus shifts from his own exploration and education to building connections within the literary field. Furthermore, the content portrays the relationships H.H. Furness concentrates on during this point in his life. For the majority of this scrapbook, the content reflects his prioritization of his relationships with his siblings and close friends, such as Fanny Kemble. However, towards the end of the scrapbook, H.H. Furness begins including more material on his children and grandchildren. This signals another shift in H.H. Furness’s life as he enters his 50s and 60s. 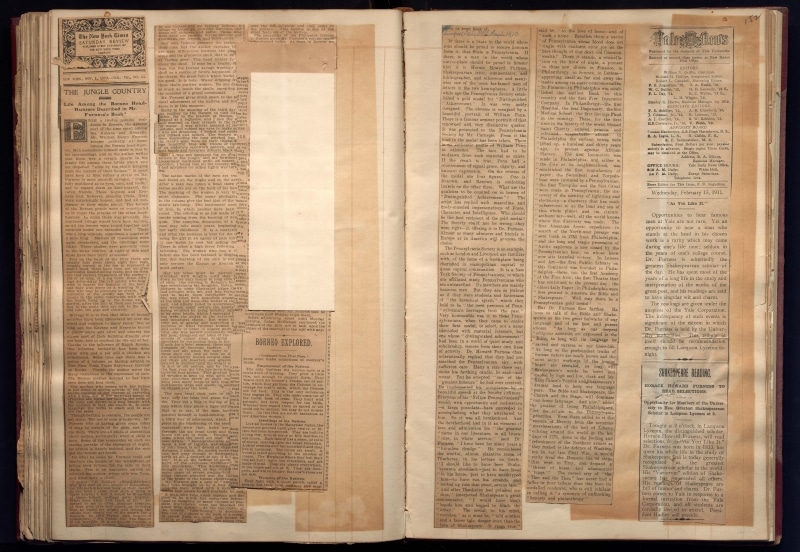 This shift in H.H. Furness’s perspective occurs around the same time that he starts the third scrapbook,  which includes material from the 1870s to the 1910s.  The level of organization that H.H. Furness implements in the third scrapbook starkly contrasts with the levels of organization in the first and second scrapbooks. The arrangement of material by content, the neat gluing in of items, the consistent inclusion of the newspaper and publication date of any article, and the addition of page numbers suggests that H.H. Furness approached this scrapbook with more intention and thought about the portrayal of his world than with the first and second scrapbooks. Additionally, more full-page articles and more material on his children, his siblings, his father, and his grandchildren are incorporated while less handwritten pieces are included. Furness also pasted in many more newspaper and periodical articles highlighting himself and his accomplishments than were present in the previous scrapbooks.

Interestingly, the clippings and sections of pages that were cut out of the second scrapbook appear to have been transferred and glued on pages in the third scrapbook. Overall, the content and organization of the third scrapbook clearly depicts an aging H.H. Furness who put an increasing amount of importance on documenting the lives of himself and his father, siblings, children, and grandchildren, almost as if he is putting his affairs and life story in order before his time runs out.

As someone who has never been drawn to scrapbooking, working with H.H. Furness’s scrapbooks has been an eye opening experience to the amount of information about someone’s existence that can be conveyed through this medium. Though I still think I won’t be starting to scrapbook anytime soon, my work this summer has been an incredible opportunity to explore a new medium of preservation and to use it to learn the intimate details of someone’s life. 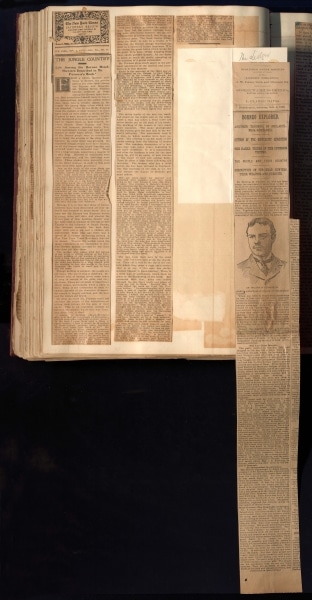