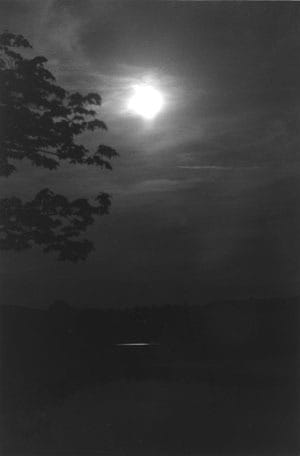 Anne Wetzel, the current owner of Library Company Share #1630, grew up with the Library Company in the family. Her father, Carroll R. Wetzel who was President of the Board of Trustees from 1975 to 1982, “talked about it all the time.” And as if that wasn’t enough to keep the Library Company in the conversation, her first job at the University of Pennsylvania was as secretary for Anthony N. B. Garvan, a Professor in Penn’s Department of American Civilization, who was himself Board President from 1986 to 1992.
Ms. Wetzel currently lives on the coast of Maine, where she has a flourishing career as a photographer capturing the life around her, such as in Moon Somes Pond 2 pictured here.  For her, it is “the small scenes that really feed her soul and make her feel the gentleness of that life.”  She also travels extensively. Although she is rarely able to attend Library Company meetings or events, Anne loves staying in touch with the institution through the Occasional Miscellany and Annual Reports.
At her mother’s death in 2007, the sense that the Library Company had always been a part of her family and her community prompted Anne to take over Share 1630, which has been held by a Wetzel since 1952.
April 12, 2012/0 Comments/by nscalessa
https://librarycompany.org/wp-content/uploads/2015/06/lcp_print.png 0 0 nscalessa https://librarycompany.org/wp-content/uploads/2015/06/lcp_print.png nscalessa2012-04-12 14:54:002017-03-01 20:47:20Shareholder Spotlight: Anne Wetzel
0 replies

Root Beer and Ice Cream: Culinary Trade Cards at the Library Company How to See a Story: Representations for Children in Nineteenth-Century American...
Scroll to top