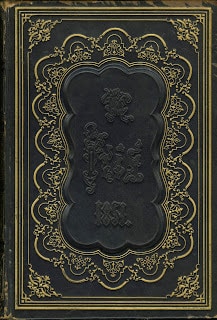 Lippincott, Grambo & Co. offered The Iris, An Illuminated Annual for 1851 in six different binding styles, two of which are shown above. At the top is what they advertised as “Turkey Morocco beveled, inlaid with Papier Maché” and below is “Calf…sunk panel and beveled.” These bindings show how bookbinders, in the competitive era of gift book publishing, bound books with ingenuity and efficiency. The bookbinder made a sunken impression in the leather cover that would accommodate the shape of the papier-mâché panel and also made an arrangement of brass ornaments that stamped a lacy gold pattern around it. Setting up the brass ornaments and creating the die that made the deep impression in the leather would have been costly and time consuming. It is not surprising, then, that the same brass ornaments and die were used on another version of the same book, with the title stamped in the sunken area.
The inlaid papier-mâché panel may have been manufactured for another purpose. With its undulating contour, it resembles other papier-mâché products from the same period. Attached to an ivory handle, it could have been a hand screen, or mounted with hinges, it could also have been a box lid. Papier-mâché manufacturers used punches and forms to create various shapes, and the bookbinders had the ingenuity to use the papier-mâché in interesting ways.
Jennifer W. Rosner
Chief of Conservation
The Library Company of Philadelphia
1314 Locust St., Philadelphia, PA 19107
TEL 215-546-3181 FAX 215-546-5167
http://www.librarycompany.org
May 25, 2012/1 Comment/by nscalessa
https://librarycompany.org/wp-content/uploads/am1850iri-72913-o-c.jpg 320 217 nscalessa https://librarycompany.org/wp-content/uploads/2015/06/lcp_print.png nscalessa2012-05-25 17:14:002019-05-01 17:01:59Binding Books with Ingenuity and Efficiency
1 reply

LCP Acquires a History of London Belonging to Peter Collinson What’s Your Type?
Scroll to top