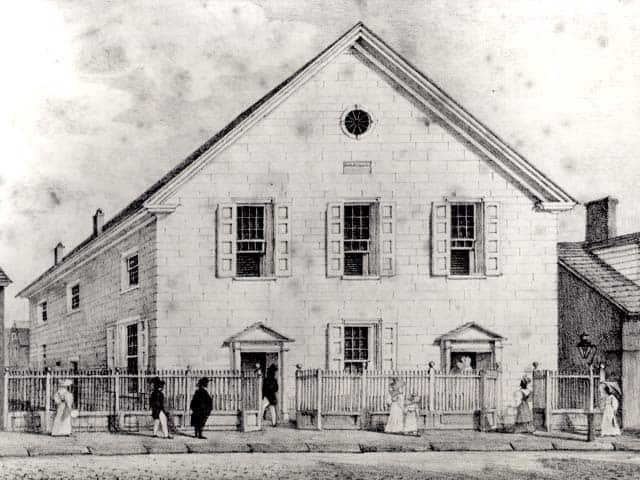 The Library Company has unveiled an audio walking tour featuring 15 important sites in the history of the Abolition movement in Philadelphia. Our partnership with Philadelphia-based start-up Lokadot, which offers free, crowd-sourced audio content through an app for iPhone, has enabled us to share historic images and vignettes at sites throughout the city. In addition to Abolition “dots,” historical Library Company landmarks are also marked with audio files.

When the app is turned on, Lokadot launches an audio file each time the user approaches its associated location. Alternatively, users may peruse an interactive map of Philadelphia overlaid with icons representing associated audio files. Finally, users may view “galleries” of files contributed by individual sources on a web browser or a mobile device.

The Abolition Walking Tour was written by Professor Rich Newman, based on the actual tour he has given to participants of a National Endowment for the Humanities Summer Seminar. The 15 stops on the tour document the extensive historical record of Abolitionist activity in Philadelphia and extend throughout the city. Sites include Mother Bethel AME Church, the James Forten House, the President’s House, and the Philadelphia Anti-Slavery Society Office.

To round out the presentation for our users, the Library Company has also compiled a smaller tour of buildings that have housed our historic collections over time. Starting with our first separate structure at 5th and Chestnut, the tour takes walkers to the Ridgway Library (now the Philadelphia High School for the Creative and Performing Arts), built under the terms of a magnificent bequest by James Rush and housing the Library Company for almost a century; the modern Library Company building at 1314 Locust Street; and the neighboring Cassatt House, designed in the 1880s by the subject of our current exhibition, Philadelphia architect Frank Furness.

75 Years at the Library Company!