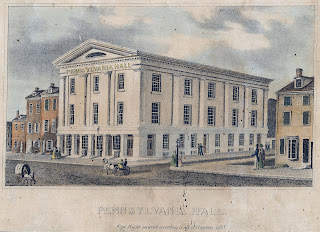 From History of Pennsylvania Hall (Philadelphia, 1838)

As noted in a previous post, this year marks the 175th anniversary of the dedication of Pennsylvania Hall. Constructed as a forum for free discussion of abolitionism and other reform movements, the building was inaugurated on May 14, 1838. After four days of dedication ceremonies and conventions of numerous anti-slavery societies, Pennsylvania Hall was destroyed in a fire by a mob. The amalgamation of the races combined with the presence of women, as attendees and speakers, were supposed to have been the primary factors that enraged anti-abolition elements in the city. Angelina Grimké Weld, Lucretia Mott, and Maria Weston Chapman were among the women who spoke at the dedication ceremonies, while Sarah Mapps Douglass was in attendance as treasurer of the Anti-Slavery Convention of American Women. The Library Company holds several items that document the peril these women faced and the fortitude they displayed in continuing to attend the abolitionist meetings. 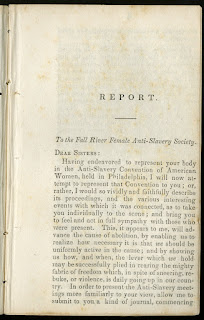 A delegate to the national convention from the Fall River Female Anti-Slavery Society in Massachusetts, Laura Lovell recorded her experiences in Report of a Delegate to the Anti-Slavery Convention of American Women (Boston, 1838). Upon arriving, she raved that, “in looking abroad over this beautiful, quiet city, the first impression is, that I have found on earth a place where order, harmony, love and freedom prevail.” Sadly, her initial impression of Philadelphia changed over the course of the week. By the third day, her joy at being surrounded by like-minded anti-slavery activists was tempered by the growing violence of the crowd outside as “several stones were thrown through the glass [windows], evidently aimed towards the speaker.” One female delegate reported walking home with blood stains on her dress after nearly being knocked over by an injured black man fleeing from a mob. By the fourth evening, with so much of the violence directed at African Americans, Lovell and other white female attendees walked arm in arm with their black comrades in order to protect them from attack as they departed the Hall “through a mob of two or three thousand, fierce, vile looking men, and large boys.”

White female abolitionists were also targets of the mob’s rage. In the Fifth Annual Report of the Boston Female Anti-slavery Society (Boston, 1838), members described being “assailed with Stones, Mud, Potatoes, Onions, and whatever first came to hand.” As they dispersed from a meeting shortly before the fire, they “bade each other farewell, not knowing that we should meet again, till we saw each other in the world of spirits.” Nevertheless, the morning after the conflagration, the ladies persevered by meeting in a schoolroom in order to complete their convention’s business and to document their proceedings. 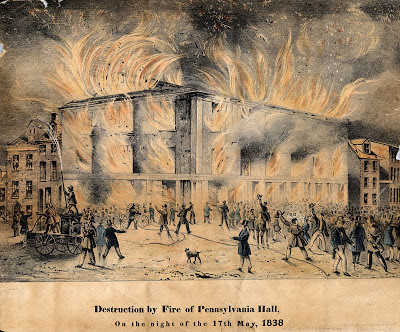 History of Pennsylvania Hall, Which Was Destroyed by a Mob, on the 17th of May, 1838 (Philadelphia, 1838) recorded the convention speeches and proceedings as well as reports of the investigation into the fire. Members of the Pennsylvania Hall Association collected anonymously written placards that urged Philadelphians “to interfere forcibly if they must” in order to disperse the convention and protect slaveholders’ rights in their human property. Despite evidence that the violence was incited by the authors of these placards, the police were unable to find witnesses to name the perpetrators and no one was ever convicted for destroying the Hall. The Police Committee issued a report which largely absolved the city of responsibility, stating that “this excitement, (heretofore unparalleled in our city,) was occasioned by the determination of the owners of that building and of their friends, to persevere in openly promulgating and advocating in it doctrines repulsive to the moral sense of a large majority of our community.” 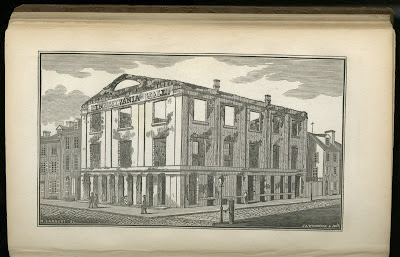 From History of Pennsylvania Hall (Philadelphia, 1838)

The arson, physical assaults, and lack of convictions demonstrated that resistance to abolition, as well as women’s participation in the public sphere, remained strong in many areas of the North.