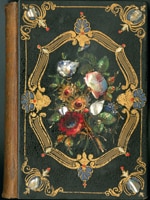 This past month, we received eleven friendship albums on-deposit from San Diego-area collector Graham Stubbs. They all have papier-mâché bindings (with mother-of-pearl decoration). Our plan is to catalog these extraordinary volumes, photograph them, and make them available to researchers. Jennifer Rosner, who has written extensively about this particular style of binding, will be adding them to the Library Company’s Flickr group: 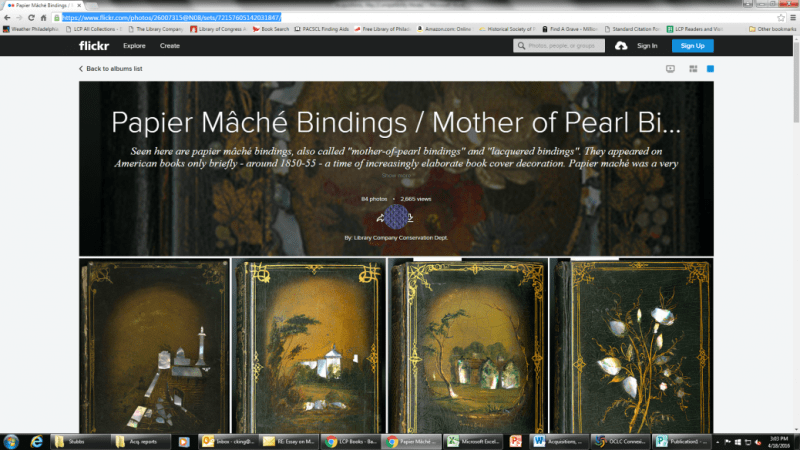 One of the loveliest in the Stubbs deposit is an album that was owned by Charlotte Altemus, whose name is engraved on the clasps: 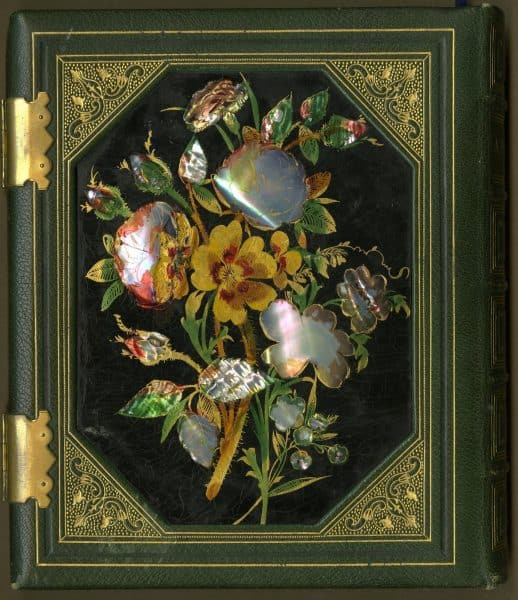 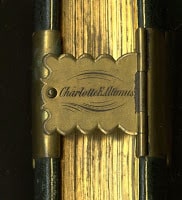 Charlotte’s album contains various inscriptions, many by Altemus family members, including one by her mother-in-law, Pamelia Taylor Altemus (1783-1863). Remarkably, Mrs. Altemus was the matron of the Philadelphia City Hospital. Every aspect of this special album suggests that it was a bespoke volume. Charlotte’s husband Samuel may have requested that the best workers put extra effort into producing it as a present for her, and she then used it to strengthen her ties with her extended family by getting people to inscribe pages in it.
In general, however, volumes with papier-mâché bindings, came out in editions. On seeing one of more modestly decorated albums in the Stubbs Collection – that is decorated with simple leaves in mother-of-pearl – Jennifer Rosner noted how remarkable it is that it still has the glaze that generally has worn off in the intervening 150+ years. 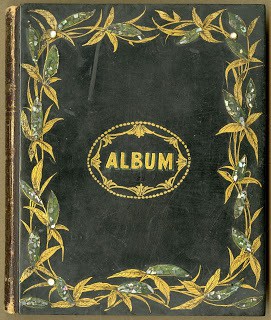 Mr. Stubbs himself has plans to publish the results of his own research on the owners and inscribers in the albums. He has uncovered complex networks of associations that these albums document. For example, he traced the story of one woman named Milla Corey (full name: Mary Permillia Corey), of Almond, New York. She signed Maria Barnard’s album. Unfortunately, Milla ended up in Willard State Hospital for the Insane, in Willard, New York. Now, we look forward to hearing the whole story, especially since Milla Corey was also an artist, and at least one of her paintings has been passed down in the family.
It seems there is no such thing as an “ordinary” volume with a papier-mâché binding. Every single one has something special and research-worthy about it. And this is only the start of our study of the Stubbs Collection, which has so much potential for further discoveries related to a wide range of fields, including women’s history, binding history, and business history.
April 21, 2016/0 Comments/by nscalessa
https://librarycompany.org/wp-content/uploads/Papier-mache.jpg 200 150 nscalessa https://librarycompany.org/wp-content/uploads/2015/06/lcp_print.png nscalessa2016-04-21 19:58:002018-05-24 13:35:46Collector Puts Papier-Mâché Bindings on Deposit
0 replies

Common Touch: The Art of the Senses in the History of the Blind
Scroll to top