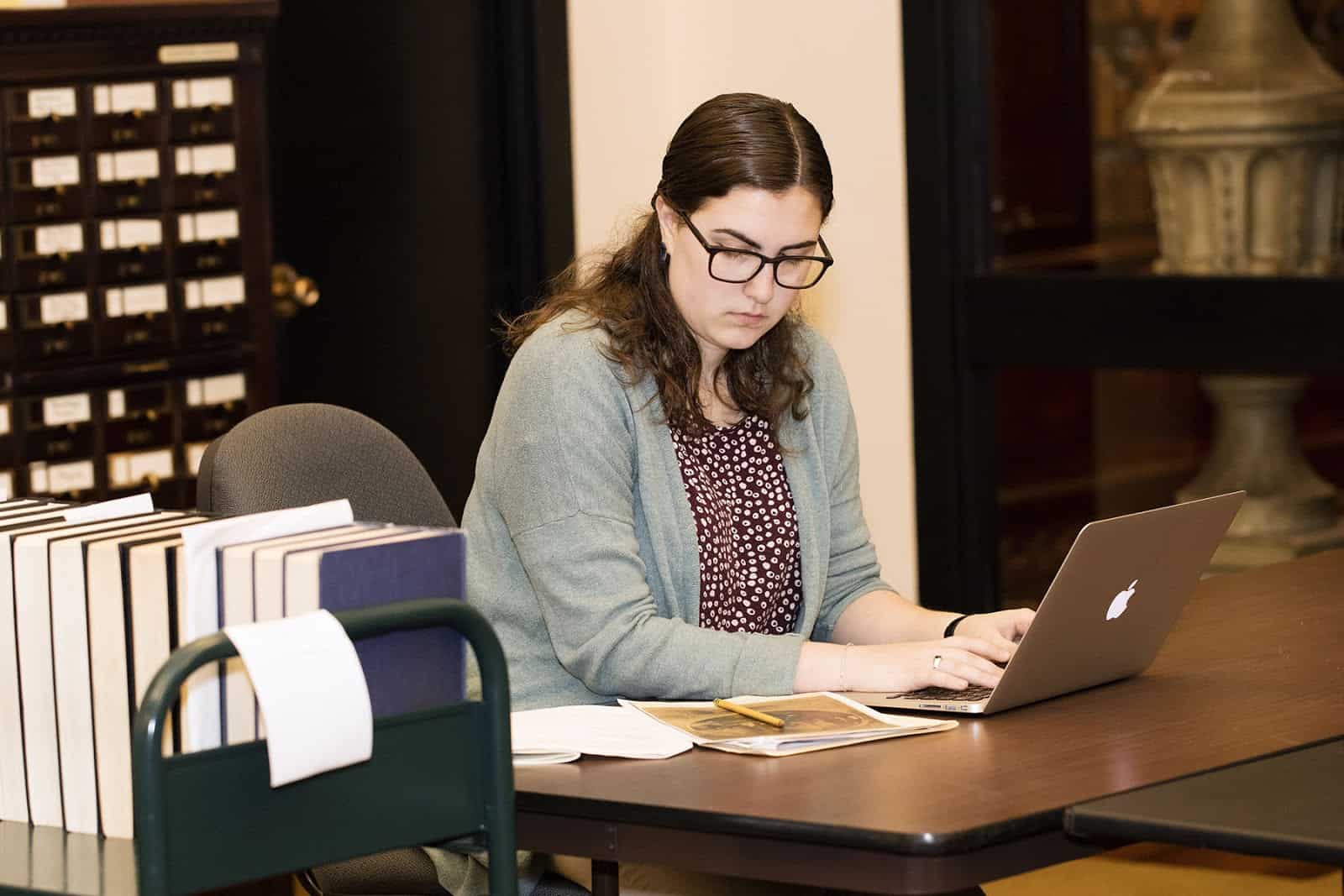 Diana Myers at work in the Reading Room of the Library Company of Philadelphia. 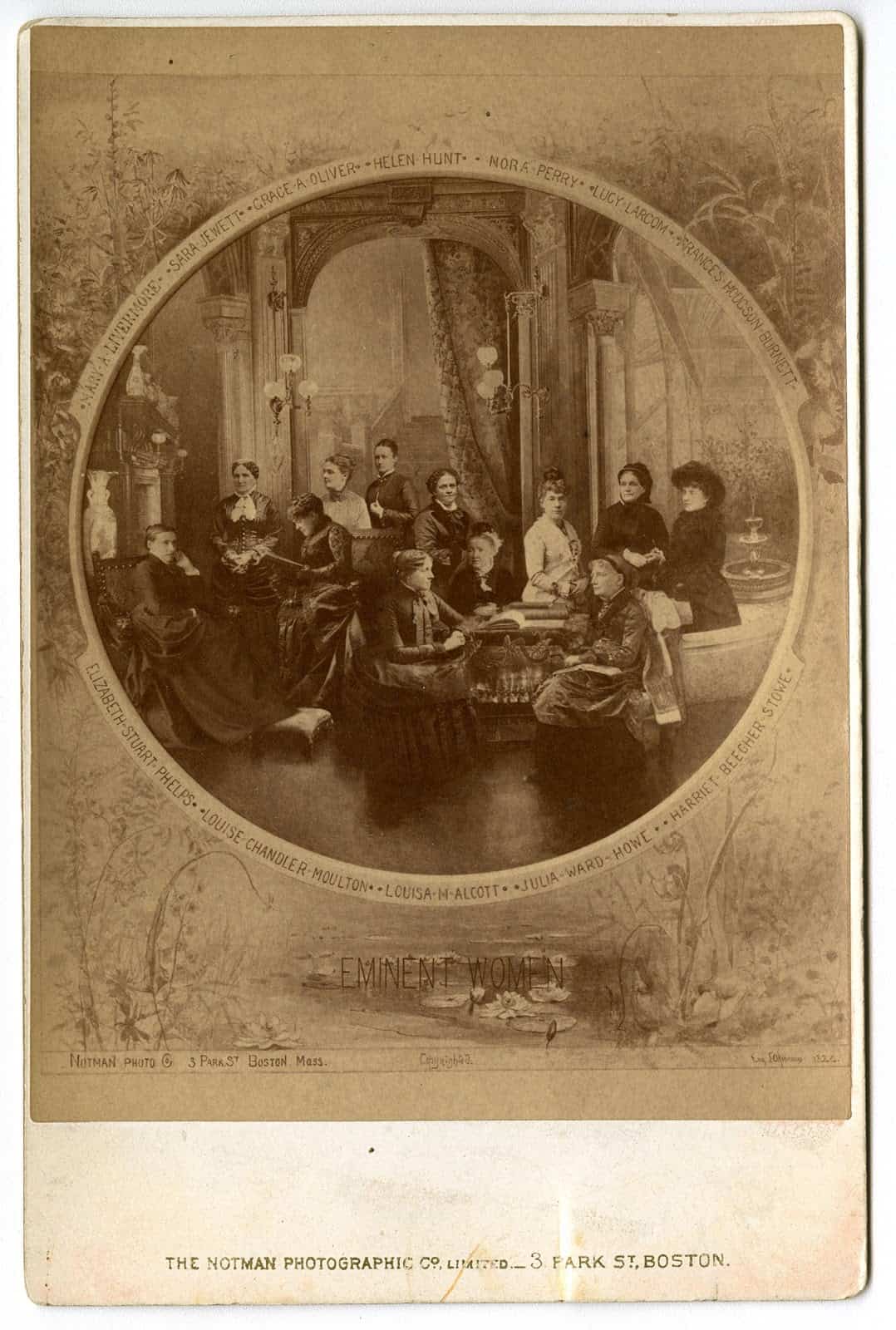 In May 2017, Masterman High School senior Diana Myers undertook the study of one remarkable item during a brief internship at the Library Company. According to Diana:

Manipulated photographs, as explained in Faking It: Manipulated Photography before Photoshop (2012), are any photographs where “the final image is not identical to what the camera ‘saw’ in the instance at which the negative was exposed.” By this standard, most early photography was manipulated. It was very hard, in the early days of photography, to control the exposure for multiple subjects and landscapes, so many techniques of combining separate images to get one good photograph were developed—including taking multiple exposures on a single negative, retouching the negatives with paint or ink, and combination printing. William Notman, whose photography studios created “Eminent Women,” was a master of combination printing—a way to get group photographs without making everyone come in to the studio at once. Notman’s combination photographs were primarily made from the “paste-up” technique, which involved cutting up negatives and pasting them in an arrangement together, before rephotographing the whole thing so it would look more realistic.

“Eminent Women,” a combination photograph of twelve notable American women, was composed in Notman’s Montreal studio in 1884 by a talented assistant, Eugene L’Africain. It was originally made as a cabinet card (similar in size to a postcard), which were common collector’s items, for advertising Travelers Insurance Company in Hartford, Connecticut. The twelve women never got together as a group, and may not have known each other. All the women were photographed separately in Notman’s Boston studio at some point in their lives. Notman and L’Africain likely pulled the photographic negatives held on file for each woman and combined them without asking for permission. The background of the photo is composed of four separate interior shots from George Stephen’s home in Montreal (he was a wealthy railway financier). Although L’Africain tried to leave no trace of his work, there are some hints that this photograph was composed. If you look closely at the fourth woman from the left (Grace Oliver), you’ll see that she seems to be cut off by the bottom edge of a mirror or frame.

The twelve women were all well-known at the time for their writing, mainly short stories and poems, although several of them were also lecturers and editors. Some of the women, like Julia Ward Howe and Mary Livermore, were also very involved in the temperance and women’s rights movements. Helen Hunt Jackson was known for her work advocating for the rights of Native Americans, and Harriet Beecher Stowe is remembered as an abolitionist (she wrote Uncle Tom’s Cabin). There are a few women included in the photo whose writings are almost unknown to us now, such as Nora Perry and Grace Oliver; while others, like children’s authors Louisa May Alcott and Frances Hodgson Burnett, continue to have their work republished and enjoyed.

For more information, see Faking It: Manipulated Photography before Photoshop (2012) by Mia Fineman, and The World of William Notman: The Nineteenth Century through a Master Lens (1993) by Roger Hall, Gordon Dodds, and Stanley Triggs.

By Deeds of Peace
Scroll to top