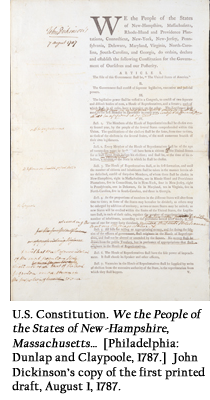 How many people realize that the stirring preamble to the Constitution, “We the people of the United States, in order to form a more perfect union…,” was a late emendation?  Delegates to the Constitutional Convention in Philadelphia during the long, hot summer of 1787 submitted to their fellows various plans for the governance of the United States, abandoned some, debated others, emended, and finally compromised.  On August 7, a committee presented the draft of a document that called for a balance of powers generally acceptable to the majority. 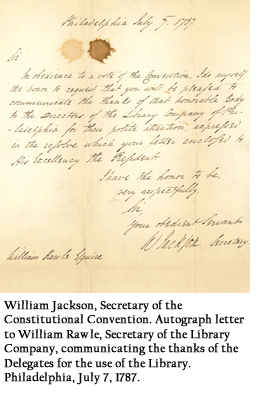 That draft was printed so that the delegates could properly and carefully review it.  Since the proceedings were secret, the edition was limited and never issued publicly.  One copy went to each delegate.  John Dickinson, one of the more cerebral statesmen of his day, noted on his copy the changes adopted in the course of further debate. A corrected draft incorporating those changes and a new preamble was printed and circulated on September 13.  That too was emended before a final version was approved on September 17.  The Dickinson Papers in the Library Company’s collection contain his annotated copies of the preliminary printed drafts of August 7 and September 13, as well as manuscript copies of earlier plans and his notes for discussion and debate.

As the fifty-five delegates to the Constitutional Convention assembled in Philadelphia’s Independence Hall, they were not two blocks from Carpenters’ Hall, where the fifty-five year old Library Company of Philadelphia had occupied two rooms since 1774.  The Library Company had opened its doors to the First and Second Continental Congresses, so it was probably only to formalize an arrangement taken for granted that the directors resolved, on 5 July 1787, to “furnish the Gentlemen composing the Convention now sitting, with such Books as they may desire during their Continuance in Philadelphia.” Two days later William Jackson, secretary to the Convention (and a member of the Library Company) returned the thanks of the delegates to the directors for “their polite attention.”  And so the Library Company became “The Delegates’ 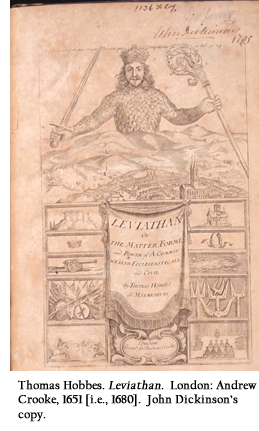 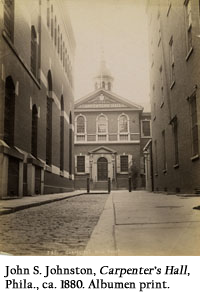 During the Convention the delegates brought the cumulative wisdom of Western thought to bear on the practical matter of framing a workable government—and they could not have failed to realize that nowhere else in America were so many of the principal works embodying this intellectual heritage gathered together under one roof. Except perhaps for the college libraries of Harvard and Yale, the Library Company was almost certainly the largest library in English-speaking America at that time, and it compared favorably with similar institutions in British provincial cities.  Indeed, by making available the nearly 5,000 titles listed in the 1789 published Catalogue, Library Company borrowing privileges provided the delegates with direct and easy access to the accumulated wisdom of the Enlightenment.

Unfortunately, no circulation records for the period exist, so we can never know which delegate borrowed or consulted what work.  But virtually every significant work on political theory, history, law, and statecraft (and much else besides) could be found on the Library Company’s shelves, as well as numerous tracts and polemical writings by American as well as European authors.  The existence of a 1789 printed catalogue of the collection makes it possible to ascertain with great certainty what those works were—and the very copies that the delegates might have used are still on our shelves.