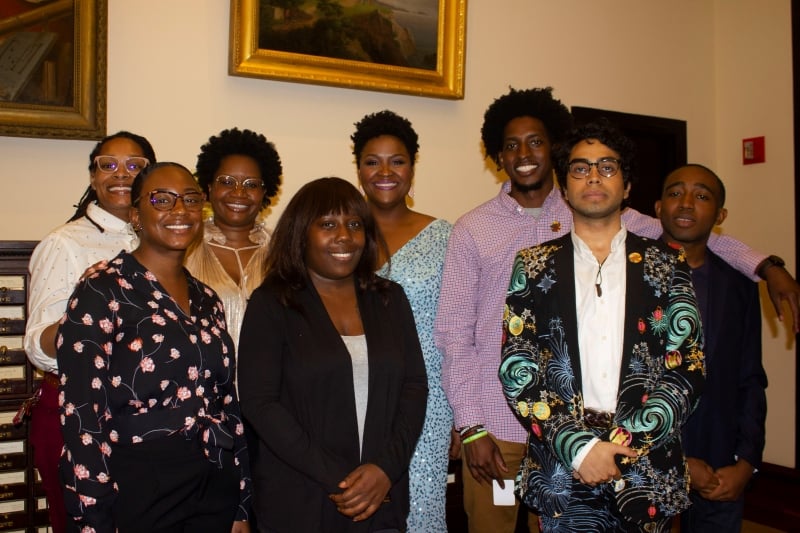 On Friday, May 24, the Library Company of Philadelphia celebrated the opening of its newest exhibit, From Negro Pasts to Afro Futures: Black Creative Re-Imaginings with a reception, remarks, and a special performance. The exhibit features highlights from the Library Company’s African Americana collection. The opening was very well attended with over 100 people in support including frequent visitors to the Library Company, shareholders and board members, as well as newcomers and curious visitors who ventured in from the street.

After visitors were given time to explore the exhibit and enjoy light refreshments, everyone convened in the Reading Room for opening remarks from Dr. Michael Barsanti, the Edwin Wolf 2nd Director of the Library Company. Dr. Barsanti explained that the exhibit intends to mark two anniversaries: the 400th anniversary of the first arrival of enslaved Africans in the colonies and the 50th anniversary of the Library Company’s groundbreaking exhibit, Negro Pasts, which opened in 1969. Dr. Barsanti recognized the irony of the location of the event; as he spoke he stood in front of Liberty Displaying the Arts and Sciences, a portrait by Samuel Jennings that was commission in 1792 by the Library Company and is the earliest American painting extant celebrating emancipated slaves.  The Board of Directors of the Library Company commissioned this painting to display the role of education, enlightenment and the Library Company in abolitionism and emancipation. A progressive statement for its time, Dr. Barsanti pointed out that this painting as many in history displays emancipation, slavery and African Americans from a white viewpoint, while the current exhibit puts the focus on African American creators.

As Dr. Cooper Owens closed by noting the poetic nature of history, a powerful voice rang out from the back of the room. The standing-room-only audience parted to reveal a woman in a sparkling blue dress waving a peacock feather fan and singing an opera ballad as she made her way through the crowd. When she reached the front of the room and concluded her song, she was introduced as Marquita Raley-Cooper, a mezzo-soprano opera singer who has performed internationally to great acclaim (and who happens to be Dr. Cooper Owens’ sister-in-law). The song she had sung was an arrangement of the Langston Hughes poem “Dream Variations” arranged by Margaret Bonds.

Dr. Cooper Owens returned to the podium and explained that she wanted to use music to bring the exhibit to life. Then, Marquita Raley Cooper gave another stunning performance. A highlight of her performance was a selection from the operetta Dream Lovers by Paul Laurence Dunbar and Samuel Coleridge-Taylor, a collection item of the Library Company featured in the exhibition.

Dr. Cooper Owens concluded by emphasizing that the exhibit is one of living history of Black Philadelphia told through found objects and song. The incorporation of music shows that the history of African Americans is not one note. The people whose histories are featured in the exhibit are both exceptional and ordinary. According to Dr. Cooper Owens, the exhibit is for everyone who believes that “Black creative genius is the bridge that will liberate us all.”

The exhibition is free and open to the public through October 18. The Library Company is open Monday through Friday, 9:00am – 4:45pm.

The Library Company is grateful to the following institutions for their support of the exhibition and its related programs: the Gladys Krieble Delmas Foundation, the Pennsylvania Abolition Society and the Pennsylvania Council for the Arts and the Andrew W. Mellon Foundation.

LCP in the News: Historic African American visions of a life of freedom and...