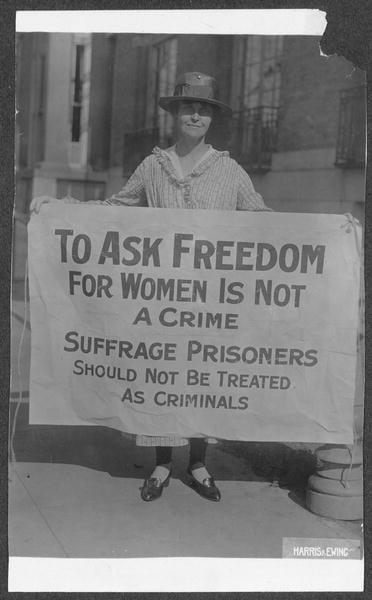 The Library Company’s shareholders have gifted us with a fascinating legacy, often marked by the issues of their times. In recognition of the upcoming 100th anniversary of the passage of the 19th Amendment, which finally gave American women the right to vote, we spotlight Share 434 and the legacy of sister shareholders deeply committed to women’s equality and socially progressive causes.

Mary, Rebecca, and Ellen Winsor came from the prominent Main Line family that founded the Winsor Line, which ran steamships between Boston, Providence, and Philadelphia. While they can be found in the Philadelphia social register during the 1920s, they actively campaigned for a vision of social advancement that differed radically from many of their contemporaries.

Mary, the oldest sister, seems to have set the progressive pace for her younger siblings. A committed women’s suffragist, Mary (1873-1956), became head of the Pennsylvania Limited Suffrage League in 1910. In 1917, she was imprisoned in the Occoquan Work House for sixty days (thirteen of them in solitary confinement) for picketing the White House on behalf of the suffragist cause.  Mary was also active in the birth control movement, which resulted in her 1921 arrest in New York City alongside Mary Sanger at a Town Hall public meeting on birth control.  In 1930, she ran for Lieutenant Governor of Pennsylvania on the Socialist ticket. In later years, she appears to have withdrawn from political activities but became a member of the International League for Peace and Freedom and the Thomas Paine Society. Ever committed to the advancement of humanity, she willed her body at death to Women’s Medical College of Pennsylvania.

Mary’s younger sister, Rebecca (1879-1959) (married name Rebecca Winsor Evans) was also a member of the Socialist party in the 1920s, and corresponded with W.E.B. Dubois about his criticism of the party’s implementation of Jim Crow policies in its Southern chapters. In 1922, she was arrested at Philadelphia’s Metropolitan Theatre with her younger sister, Ellen (1882-1959), for gathering signatures on a clemency petition for federal prisoners jailed for protesting American participation in World War I.  She and Ellen also co-authored a book on the distribution of land, labor and wealth, published in 1942. In 1959, Rebecca established the Rebecca Winsor Evans and Ellen Winsor Scholarship at Bryn Mawr to provide financial aid to minority undergraduate students. To the end of their lives, Rebecca and Ellen remained close, dying within 20 minutes of each other. On Ellen’s death certificate, her occupation was cited as “Professional Agitator.”

Rebecca and Mary Winsor held Share 434 for over 50 years, supporting the Library Company’s preservation of the past even as they actively participated in shaping the present and future. Become a shareholder today to help us grow our diverse and wide-ranging legacy.

Caught Their Eye
Scroll to top