Victoria Woodhull: A Woman Who Dared to Be Outspoken

In Summer 2020, Franklin & Marshall intern Lydia Shaw worked on a range of women’s history projects at the Library Company, including the social media posts for the exhibition Women Get Things Done: Women’s Activism, 1860-1880. In this election season, it’s worth reading what Lydia wrote about Victoria Woodhull … the remarkable woman who ran for president in 1872 … only one of many chapters in her remarkable life.

In his 1871 biography of Victoria Woodhull (1838-1927), Theodore Tilton writes that “to see her is to respect her—to know her is to vindicate her” (35). Though her life, works, and achievements are often obscured in history, Victoria is notable as a Marxist-Socialist, women’s rights advocate, marriage reformer, free love advocate, Spiritualist, broker, publisher, and many other roles. Woodhull was born in Homer, Ohio, in 1838 to Roxana and Reuben Buckman Claflin, who were both physically and emotionally abusive to their children. Woodhull was the seventh of ten children, and in young-adulthood she grew closest to her youngest sibling, Tennessee “Tennie” Claflin. Buckman Claflin lost all of his money in a failed insurance scam when Woodhull was young, and she received very little formal education. Instead, Woodhull felt that she gained much of her education—and her political inspiration—from the spirit world, and later in life, she became a devoted Spiritualist and president of the American Association of Spiritualists.

Victoria Woodhull and Tennie Claflin moved to New York City in 1868 and established a brokerage on Wall Street with the help of Cornelius Vanderbilt. In 1870, the sisters used the funds earned from their firm to establish and print their own newspaper, Woodhull & Claflin’s Weekly, which focused on politically radical ideologies of the time, such as Spiritualism, women’s rights, free love, and socialist reforms. Woodhull & Claflin’s Weekly also campaigned heavily for Victoria Woodhull when she was nominated to run for the 1872 presidency by the Equal Rights Party with the support of fellow women’s rights activists and party members Elizabeth Cady Stanton and Susan B. Anthony. The Equal Rights Party chose Frederick Douglass as her running mate, but he never formally accepted—or even acknowledged—his nomination.

During her campaign, Woodhull broke a scandal in Woodhull & Claflin’s Weekly that shocked White Evangelicals of New York City and the American public. She alleged that her friend the Rev. Henry Ward Beecher had initiated and maintained an affair with one of his parishioners, Elizabeth Tilton—the wife of Woodhull and Beecher’s shared friend Theodore Tilton, who had written the prolific biography of Woodhull. 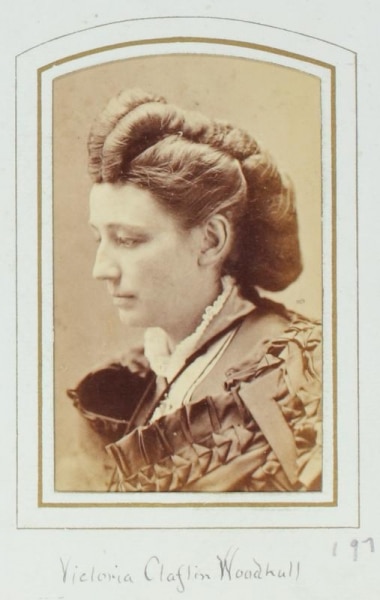 Woodhull specified in an interview published in Woodhull & Claflin’s Weekly November 2, 1872, that the fault in Beecher’s actions lied not in his affair, which Woodhull supported through her advocacy of free love, but in his hypocrisy for preaching marital law and devotion while conducting an affair in private. She took issue with Beecher’s inconsistency on free love: in practice, he agreed with the philosophy, but he (so to speak) did not preach it—likely due to the controversy surrounding free love. Beecher preached sexual devotion in marriages, specifically of wives to their husbands. In the same interview, Woodhull emphasized that while she criticized Beecher, the true problem was much larger than his individual actions: “[The issue] lies in the compulsory hypocrisy and systematic falsehood which is thus enforced and inwrought into the very structure of society, and in the consequent and wide-spread injury to the whole community” (13).

The Beecher-Tilton scandal became a national controversy. Many who heard of it blamed Woodhull for fabricating such a story, rather than Beecher for his immorality. Just before the 1872 election, Woodhull, her husband Colonel James Blood, and Tennie Claflin were arrested and held in jail for a month for publishing obscenity in Woodhull & Claflin’s Weekly. Though Woodhull’s prospects of being elected for president were slim to begin with—she did not meet constitutional requirements, did not run on a major party platform, and the public tended to be averse to her political ideologies—she lost the election to Ulysses S. Grant while in jail.

A common narrative in newspaper articles, contemporary sentimental literature on the subject, and by word of mouth was that Woodhull’s accusations were false slander. However, Woodhull and Claflin insisted that they be heard. In an article titled “A Request […] to the Public” (November 2, 1872) in Woodhull & Claflin’s Weekly, they wrote, “We were in earnest; we meant every word we ever said, and we are still more deeply in earnest now, and we mean every word we ever said with a deeper and broader significance now than when it was spoken or written” (Woodhull and Claflin 8). However, their words were almost entirely ignored by the general public. Even accounts that claimed to be impartial took a stance.

One such book, The Great Sensation (1873), begins, “In presenting this book to the reading public, neither the Author, or Publishers, have any desire, or intention, to pander to prurient or depraved taste, or to violate the sanctity of private lives” (Oliver 3). The book gestures at an unbiased tone, but its own content is conflicting: while the book gives favorable descriptions of Woodhull, it consistently refers to her as “The Woodhull,” as if she were an object of public discourse instead of a woman who participated in public discourse. The Great Sensation also includes “Various Opinions, from Various Sources, of the Woodhull,” which range from descriptions of Woodhull as a “monstrosity” to “a grand, brave woman” (Oliver 39-41).

Another piece of sensational literature on the scandal is The Beecher-Tilton Scandal (1874). This book, which lists no author or editor, contains the “History of the Case” said to be “An Authentic Record,” as well as interviews, statements, and other materials. Furthermore, the book contains a section titled “A Supplement to the Woodhull Biography” which undermines the Tilton biography of Victoria Woodhull (124). The section excerpts a statement from The Brooklyn Eagle denouncing Woodhull as “the queen of prostitutes” and describing an incident in which, according to the paper, Woodhull was inebriated during a meeting and conducted herself inappropriately.

Tilton himself begins his biography of Victoria Woodhull with a quote from Solomon 10:18: “He that uttereth a slander is a fool” (3). Likely infuriated by his own wife’s betrayal, as well as the betrayal of the public in vilifying Woodhull, Tilton’s biography is unique in its solely positive portrayal of his dear friend. Later in his biography, Tilton notes that Woodhull, “more than most human beings, scorns a lie, and would burn at the stake rather than practise a deceit” (22). Unfortunately, it was the oppressive systems of power that Woodhull sought to expose which ultimately damaged her credibility as an activist in the public eye.

Woodhull’s critique of not just individuals but systems which perpetuate inequality resonates today, as we grapple with approaching a more equitable future. Her impulse to speak out against inequality and hypocrisy, despite—and in spite of—the possible ramifications is an impulse that is only growing.

The Beecher-Tilton Scandal: A Complete History of the Case … with Mrs. Woodhull’s Statement, Etc. New York: F. A. Bancker, 1874. https://www.google.com/books/edition/The_Beecher_Tilton_Scandal_a_Complete_Hi/eVqAdEFUF-MC?hl=en&gbpv=0.