We acquired this piece of sheet music primarily to use its wonderful chromolithographed cover for the publicity for a Women’s History Month event next March (“Discovering the Bicycle: Women Find a Vehicle for Empowerment”). In the process of cataloging the item, we discovered many interesting things.

We found that its composer George Rosenberg (1864-1936) used the name “George Rosey” professionally. Rosenberg is believed to have emigrated from Europe to New York City, where he initially used his musical training to arrange compositions for vaudeville. Rosenberg’s own compositions had the rhythm of ragtime, which was reaching its height of popularity in the late 1890s. By 1917, Rosenberg was operating the George Rosey Publishing Company in New York City. Thanks to YouTube, we could even listen to this instrumental work: 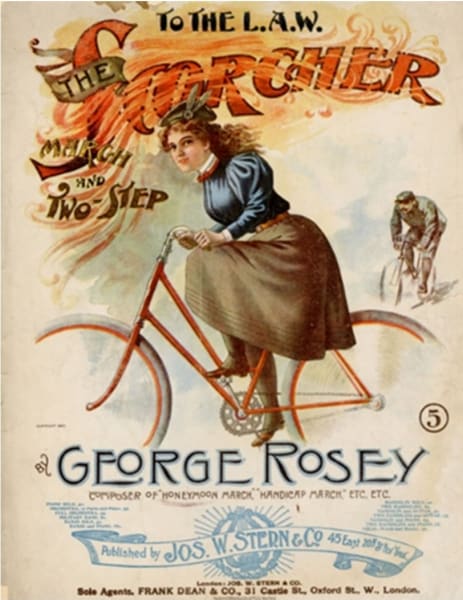 The woman bicyclist on the cover is the “Scorcher.” The word was slang for a bicycle racer. In the 1860s, calling a woman bicyclist a “scorcher” would have had profoundly negative connotations, suggesting wild hedonism (of a gender-inappropriate kind!). But by the 1890s, the negative connotations had diminished and both men and women were happily riding bicycles, joining bicycle clubs, and … apparently … dancing to music inspired by bicycling.

Intriguingly, the woman bicyclist on our copy of The Scorcher differs from the woman on the copy reproduced with the YouTube music. Immediately, we noticed a difference in coloring. On closer examination, we noted that “our woman” wears a full skirt and possibly gaiters made of the same fabric (a recommended bicycle costume). Her red neck scarf is very compact. By comparison, the woman bicyclist reproduced next to the music on YouTube has a longer scarf, which is blowing in the wind generated by her cycling. But the edgy aspect is the extent to which her anatomy is revealed; her skirt is pressed against her body to reveal the shape of her thigh, and her legs are covered with eye-catching black stockings. This depiction of the “scorcher” plays to the criticism of woman bicyclists as unrespectable, criticism that had largely died down by the 1890s, but was not forgotten.

A huge factor in the rise in respectability for women bicyclists was the inclusion of women members in the League of American Wheelmen (L.A.W.), to which this piece of sheet music is dedicated. From its establishment in 1880, women members were welcomed. Today the group is known as the League of American Bicyclists, with its mission to create a “Bicycle Friendly America.” Given the League’s important role advocating for paved roads in its early history, it seems only fair that bicyclists get road space today. Here’s to all the 21st-century Scorchers!

Connie King, Chief of Reference and Curator of Women’s History