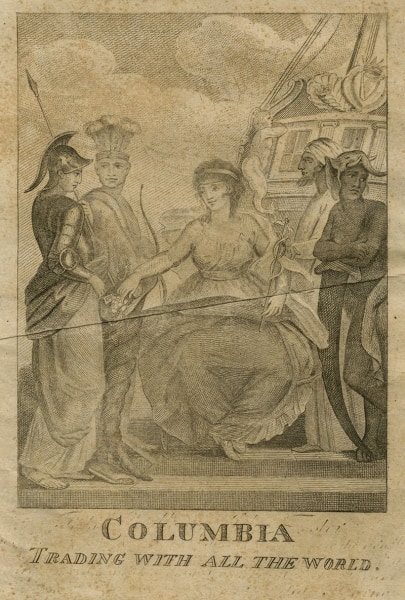 Columbia Trading with All the World (United States?, ca. 1789-1800). Engraving. The Library Company of Philadelphia. Click here for catalog record.

How and why did the newly independent United States become an empire?  The answer to this question is not obvious. Before the American Revolution, the colonies and the continent beyond them were spaces of contest, collaboration, and competition among European empires, Native American powers, and enslaved and free African Americans. The founding generation of the early republic added its own imperial ambitions to this mix, revealing competing visions for the new nation, intense debate in the new citizenry about whether and how quickly the republic should expand, what role it should play among international states, and what its character and purpose should be. Some began calling their nation an “empire” almost as soon as they started calling it a republic, while others wondered if the idea of an expansive republic was a contradiction in terms. Yet in just seven decades, the fledgling republic had become an imperial juggernaut with ambitions to rule a continent and beyond. By the 1840s, the United States had refined its tools for dispossessing Native peoples and asserted a political economy grounded in black enslavement. It had conquered an immense amount of territory and claimed the Pacific Ocean as its western boundary, while setting its imperial sights upon regions, peoples, and resources much further afield.

At this conference six panels of scholars will use empire as an analytical framework for thinking and writing about the early republic.  They will employ a wide variety of methods and approaches to investigate how and why the new nation became an empire, and to explore the meaning and utility of empire as a category of analysis for understanding the history of the early republic.

The Program in Early American Economy and Society at the Library Company of Philadelphia, the McNeil Center for Early American Studies, the Department of History at Princeton University, and Iona College’s Institute of Thomas Paine Studies are pleased to co-sponsor this two-day conference bringing together scholars of imperialism in its multiple early North American forms and spaces.