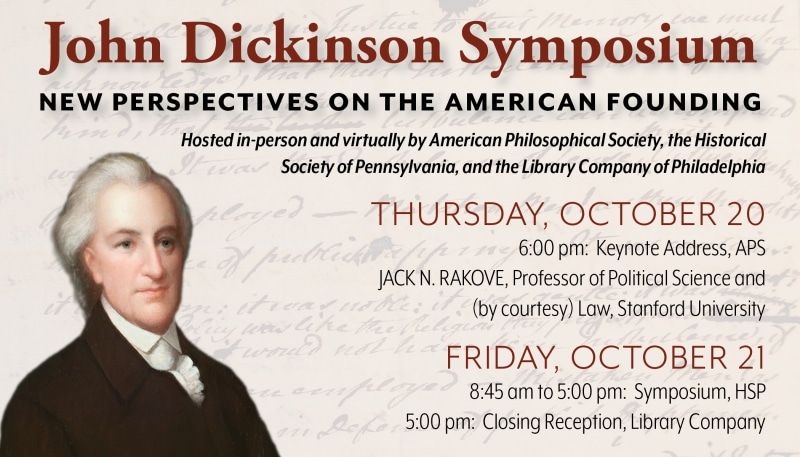 Plenary Address by Jack N. Rakove: “John Dickinson, Political Conscience, and the Dilemma of the Moderates”

Hosted by the American Philosophical Society

Jack N. Rakove is the emeritus William Robertson Coe Professor of History and American Studies, and Professor of Political Science and (by courtesy) Law at Stanford University, where he has taught since 1980. He is author of numerous books, articles, and essays, as well as editor of several volumes of primary and secondary sources, on the political history of the Founding Era. His 1997 study Original Meanings: Politics and Ideas in the Making of the Constitution won the Pulitzer Prize in History, the Fraunces Tavern Museum Book Award, and the Society of the Cincinnati Book Prize. He is currently at work on The Ticklish Experiment: A Political History of the Constitution (under contract to Farrar Straus Giroux). He has published numerous op-ed articles in such newspapers as the Los Angeles Times, Chicago Tribune, Washington Post, San Francisco Chronicle, and New York Times. Other work includes testifying before Congress on impeachment in 1998, serving as consultant expert witness in several cases involving Indian land claims in New York State dating to the 1780s, and writing four amicus curiae briefs for the Supreme Court, including one cited by Justice John Paul Stevens in D.C. v. Heller (2008), the leading Second Amendment case. Among many other positions held, he has been a member of the American Academy of Arts and Sciences since 1999 and the American Philosophical Society since 2007.

Hosted by the Historical Society of Pennsylvania

Panel One: Matters of State

Nathan R. Kozuskanich, “‘A Certain Coldness in my Presbyterian Friends’: Dickinson and the Pennsylvania Radicals”

Helena Yoo, “Letters from Before He Became a Farmer: John Dickinson’s Transatlantic Correspondence”

David Forte, “John Dickinson and the Freedom of the Press”

Lunch on your own

Drop in Dickinson Artifact Tours at the Library Company of Philadelphia

Kevin Bendesky, “The Criminal Jurisprudence and Penology of John Dickinson”

Hosted by the Library Company of Philadelphia

For the safety of all guests and staff, proof of COVID-19 vaccination and masking are required of all guests. Upon entering the building, please provide proof of vaccination. Proof will be accepted in the form of your original vaccination card, a photo of it on your phone, or a photocopy of the original. All guests are required to remain properly masked throughout their time at the Symposium.