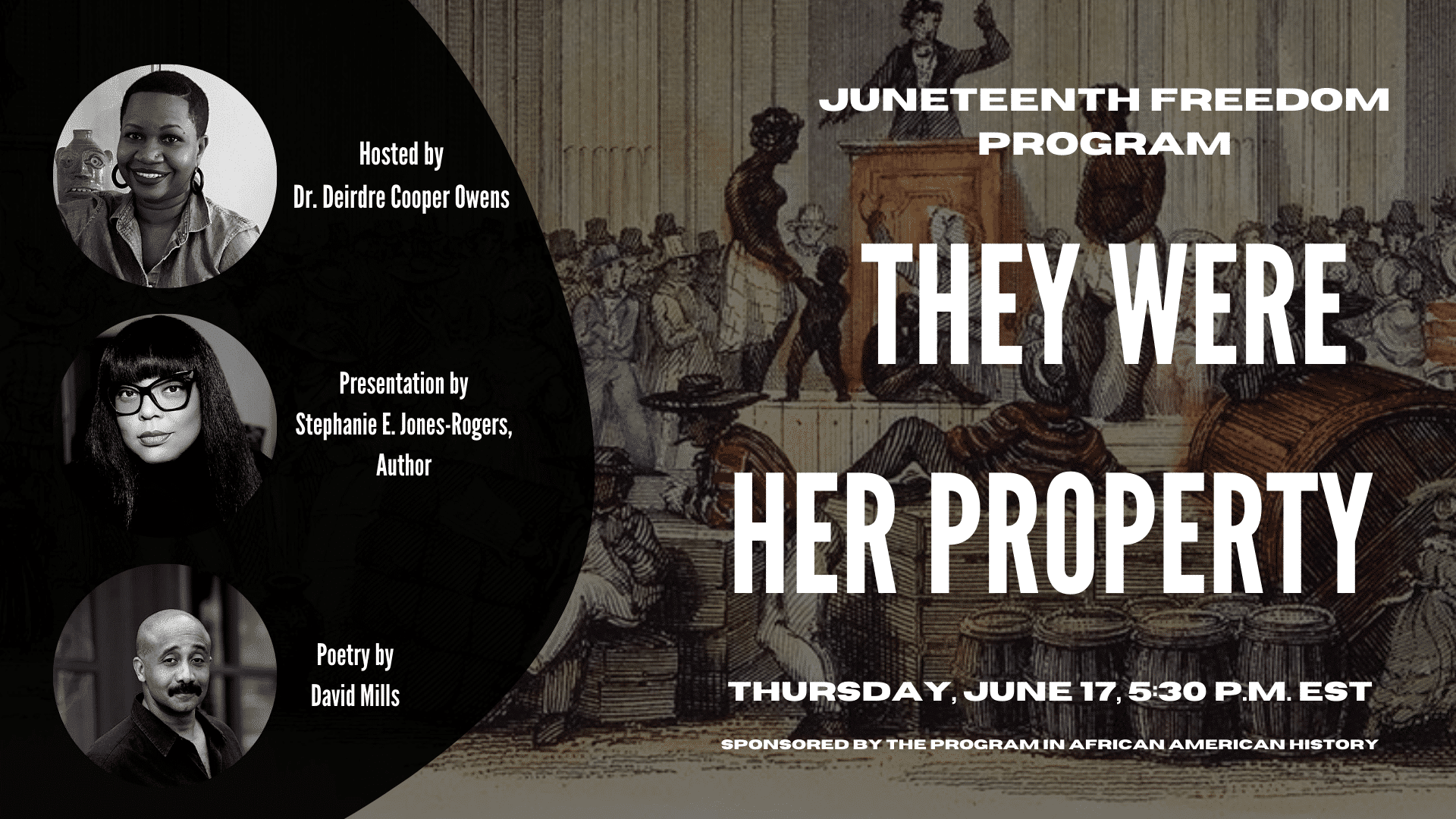 Juneteenth: They Were Her Property Thursday, June 17 5:30-7:00 p.m. EST Sponsored by the Program in African American History This year’s Juneteenth Freedom Program:

Juneteenth: They Were Her Property

Sponsored by the Program in African American History

This year’s Juneteenth Freedom Program: They Were Her Property explores Stephanie E. Jones-Rogers book “They were her Property: White Women as Slave Owners in the American South”. It will also feature poet David Mills, who will reading be poems about slavery in New York City and Massachusetts.

“Bridging women’s history, the history of the South, and African American history, this book makes a bold argument about the role of white women in American slavery.” Jones-Rogers argues that white women who owned slaves were “sophisticated economic actors” who benefited from the slave market in the South economically and socially. Ultimately, Jones-Rogers book causes the reader to question & revaluate the economics and social conventions of slaveholding in America.

Stephanie E. Jones-Rogers is an Associate Professor of History at the University of California, Berkeley where she specializes in African-American history, women’s and gender history, and the history of American slavery. She is the author of They Were Her Property: White Women as Slave Owners in the American South (Yale University Press, 2019), which won the Lapidus Center for the Historical Analysis of Transatlantic Slavery (at the New York Public Library’s Schomburg Center for Research in Black Culture) 2020 Harriet Tubman Prize for the best nonfiction book published in the United States on the slave trade, slavery, and anti-slavery in the Atlantic World,  the Southern Association for Women’s Historians 2020 Julia Cherry Spruill Prize awarded for the best book in southern women’s history, the Southern Historical Association’s 2020 Charles S. Sydnor Award which is awarded for the best book in southern history published in an odd-numbered year, the Society for Historians of the Early American Republic’s 2020 Best Book Prize, and the Organization of American Historians’ 2020 Merle Curti Prize for the best book in American social history. Jones-Rogers is also the first African-American and the third woman to win the Los Angeles Times Book Prize in History since the award’s inception in 1980.

They Were Her Property is based on Jones-Rogers’s revised dissertation which won the Organization of American Historians’ Lerner-Scott Prize for the best doctoral dissertation in U.S. women’s history in 2013. Her work has appeared in Slavery and Abolition, Women’s America: Refocusing the Past, Sexuality and Slavery: Reclaiming Intimate Histories in the Americas, as well as online platforms.

She is currently at work on a few new projects. My second book Women of the Trade (under contract with Liveright) reorients our understanding of the British Atlantic slave trade by centering the lives and experiences of English, African, and Afro-English women, free and captive, in its telling. Organized like the typical slave ship journey, Women of the Trade crafts a narrative about the British slave trade in which English and African women were fundamental, one wherein their financial investments and support, their strategies and political maneuvering, their labor and commercial savvy, their love, and their resistance proved crucial. My third Women, American Slavery, and the Law (also under contract with Liveright) will be the first book-length manuscript to examine the relationship between gender and the evolution of American slave/property law in both the North and the South from the colonial period to slavery’s legal end. It considers how the gradual abolition of slavery in the North affected free women’s lives, especially those who owned enslaved people. It also examines the relationship between the expansion of slavery into the West and the implementation of laws that protected married women’s property rights, particularly those living in newly formed states in which slavery would become economically fundamental. More profoundly, it explores how slave-owning women’s actions—particularly their demands that local and state courts recognize their rights to hold enslaved people in bondage—shaped the legal transformations that unfolded in both regions. And my study “She had…a Womb Subjected to Bondage”: The Afro-Atlantic Origins of British Colonial Descent Law examines the ways that West African customs and laws influenced English thinking about matrilineal descent and may have influenced their decisions to implement matrilineal descent laws in their North American colonies. Funds from the NEH, the Ford Foundation, and the Woodrow Wilson Foundation have supported this work.

Mr. Mills holds an MFA from Warren Wilson College and an MA from New York University. He’s published three poetry collections, The Dream Detective, The Sudden Country and After Mistic (Massachusetts slavery poems). Individual poems have appeared in Ploughshares, Brooklyn Rail, Colorado Review, Crab Orchard Review, Jubilat, Callaloo, Obsidian and Fence. He has also received fellowships from the New York Foundation for the Arts, Breadloaf and the Lannan Foundation.  He lived in Langston Hughes’ landmark Harlem home for three years. He wrote the audio script for Macarthur-Genius-Award Winner Deborah Willis’ curated exhibition: Reflections in Black:100 Years of Black Photography, which showed at the Whitney and Getty West Museums. The Juilliard School of Drama commissioned and produced a play by Mr. Mills. He has also recorded his poetry on ESPN and RCA Records.

Fireside Chat: Merchants of Medicines: The Commerce and Coercion of Health...
Scroll to top