The Library Company in its 287-year history has amassed an impressive collection of over 300 cultural objects, including paintings, sculpture, decorative arts, scientific instruments, and other artifacts. Though small, the collection includes many treasures, such as William Penn’s tall case clock and an electrical machine Benjamin Franklin used to conduct experiments. The Library has a remarkable art collection with works by such distinguished artists as Benjamin West, Thomas Sully, James Peale, and Thomas Birch.

Prior to the establishment of museums, institutions like the Library Company served as centers for learning, collecting objects in addition to books. In the first few decades of the Library, members donated an assortment of curiosities from fossils and shells to coins and arrowheads. Later, art took precedence over curiosities; the first painting added to the collection was Samuel Jennings’s Liberty Displaying the Arts and Sciences in 1792. Art remains strongly represented in our collection and many of the works can be seen on display. 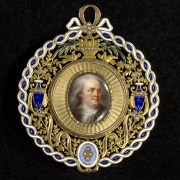 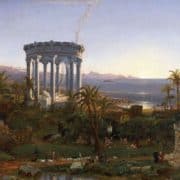