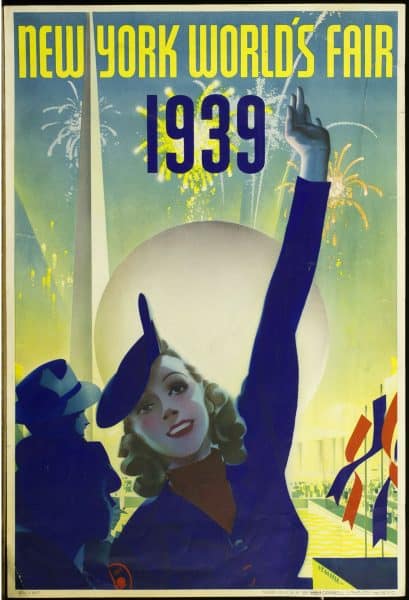 The Print Room at the Library Company of Philadelphia is a very organized place. Each box is labeled and lovingly tucked back into its proper slot after a research session. Each drawer is carefully inventoried and organized by subject matter, size, and accession number. However, there are still corners of the Print Room where mysterious objects lurk, waiting to be discovered, studied, and processed. Not only do these graphic works provide stunning examples of prints, maps and photographs, they also give us a glimpse into history.
One such resident of the so called Mystery Drawers is this poster advertising the 1939 World’s Fair in New York. Its vibrant colors leap off the page, saturated blues and yellows demanding the viewer’s attention. In the lithographic print, a young woman stands in the foreground, her cap at a jaunty angle, her cheeks rosy and her arm raised in an enthusiastic gesture. Behind her is a large building, its white façade lit by colorful fireworks. It is composed of two giant structures: a three sided obelisk called the Trylon and a sphere almost 200 feet in diameter called the Perisphere. The pair, also known as Theme Center, were used in all kinds of promotional material and came to symbolize the Fair’s “World of Tomorrow” theme. Inside the Perisphere was a model of “Democracity”, a united, organized city of the future. This optimistic view was reflected throughout the Fair and can also be seen in the Library Company’s 1939 poster. The woman smiles and raises her arm as if welcoming in the bright new day ahead of her, volunteering to do her part in the World of Tomorrow.
However, the Fair’s forward-looking focus took a turn with the outbreak of World War II. The hope for a peaceful, unified future stood in contrast with the horrors of war, just as the bright colors and optimistic message of the poster would seem increasingly disparate from the growing tension in Europe. As the war progressed, nations represented at the Fair were wiped off the map. For example, the Czechoslovakian contingent defied Germany, who had annexed their nation in March, 1939, and went ahead with their pavilion at the Fair. Many of their exhibitions were confiscated by the Nazis and by consequence the Czech pavilion was unfinished when the Fair opened. Even in 1939, the effects of war were palpable. In his review of the Fair, American poet John Peale Bishop wrote a somber description of the Soviet pavilion: “The effect of the whole is like that of a tomb, one of those impressive tombs which in almost every country after the last war were erected about an Unknown Soldier. No man is buried under the flagstones of the courtyard; and yet I am not so sure that there is not something dead there. It is hope that lies dead.”
By 1940, the Fair was in its second season and its theme had been changed to “Peace and Freedom.” Rather than futuristic exhibitions like the Trylon and Perisphere, nostalgic historical exhibitions and the amusement area became the most popular areas of the Fair. The happy World of Tomorrow shown in the Library Company’s poster depicted a fair that no longer existed and a future whose existence seemed almost impossible at the outset of WWII.
Alison Van Denend
IFPDA Foundation Curatorial Intern, Summer 2014
Sources
John Peale Bishop. “World’s Fair Notes.” The Kenyon Review 1 no. 3 (Summer 1939): 239-50. JSTOR. http://www.jstor.org/stable/4332081.
Marco Duranti. “Utopia, Nostalgia and World War at the 1939-40 New York World’s Fair.” Journal of Contemporary History 41, no. 4 (October 2006): 663-83. JSTOR. http://www.jstor.org/stable/30036413.
Helen A. Harrison. “Stuart Davis’s World of Tomorrow.” American Art 9, no. 3 (Autumn 1995): 96-100. JSTOR. http://www.jstor.org/stable/3109208.
The Library Company of Philadelphia
1314 Locust St., Philadelphia, PA 19107
TEL 215-546-3181 FAX 215-546-5167
http://www.librarycompany.org
June 30, 2014/0 Comments/by nscalessa
https://librarycompany.org/wp-content/uploads/2015/06/lcp_print.png 0 0 nscalessa https://librarycompany.org/wp-content/uploads/2015/06/lcp_print.png nscalessa2014-06-30 13:00:002017-03-01 20:47:21Tales from the Mystery Drawers, Part 1: The World of Tomorrow
0 replies