Curator’s Favorite: A Tunnel Book by Any Other Name … 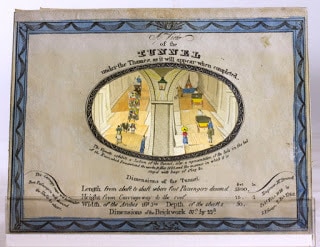 A View of the Tunnel under the Thames, as it will Appear When Completed  (London: S. E. Gouyn, 1828)

The enchanting optical device purchased with funds from our Visual Culture Program represents the long and complicated history of the interrelationship of the study of optics with popular culture. 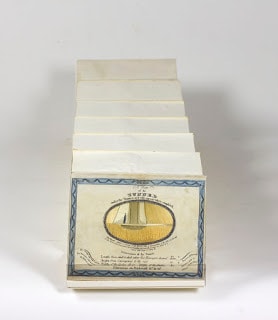 Front view of extended tunnel book A View of the Tunnel under the Thames, as it will Appear When Completed (London: S. E. Gouyn, 1828).

Collector and scholar Richard Balzer dates peepshows’/tunnel books’ beginnings to around the 15th century in Europe when box-like devices with peepholes were created to learn about the mechanics of vision. The instruments, often used by Renaissance artists to recreate perspective, became primarily associated with the itinerant showman by the 18th century. Later in the century peepshows entered the parlors of the affluent as the perspective box in which a set of prints was arranged to create a three-dimensional view designed to entertain the eye and mind. By the 1820s peepshows more closely resembling the subject of this essay became items of more general consumption when professionally printed and assembled for introduction into the market as souvenirs. A channel being constructed under the Thames River made the ideal subject for an optical device that created a “tunnel” perspective.

The start of the construction in 1825 of the Thames Tunnel, the “Eighth Wonder of the World,” made international news. On August 23, 1825, the Philadelphia newspaper the National Gazette wrote about the underground tunnel that would connect the opposite banks of the Thames River for commercial purposes as “the commencement of [a] novel undertaking, which will be read with interest.” Constructed after the revolutionary designs of Marc Brunel (1769-1849), the novel undertaking led not only to persons reading about it with interest but to the production of novelties. From the onset of construction and despite floods and collapses in the 1820s and 1830s, visitors flocked to see the tunnel. Merchandise vendors selling all manner of souvenirs, including peepshows, quickly followed. The engineering feat spurred publishers to issue over fifty different designs of Thames Tunnel peepshows between 1825 and the early 1860s. No other subject comprised as many of them. By probable consequence, the contemporary term “tunnel book” soon thereafter superseded “peepshow” in our lexicon for these devices. 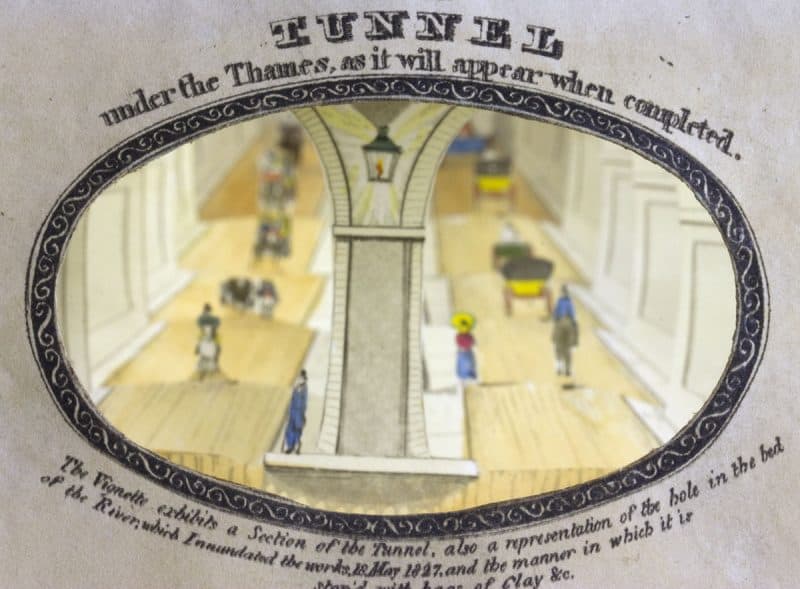 Interior view of tunnel book A View of the Tunnel under the Thames, as it will Appear When Completed  (London: S. E. Gouyn, 1828).

The first Thames Tunnel peepshow issued in 1825 by London publisher T. Brown served as the model for the graphic design of the devices, including S. E. Gouyn’s, through the 1830s. Comprised of the imagined Eastern and Western archways, a look through the book’s peephole reveals pedestrian and vehicular traffic, including men on horseback, carriages, and horse-drawn wagons. A prime article for the transatlantic book trade, our newly-acquired peepshow may likely be the “perspective view of the tunnel under the Thames” advertised in the New York newspaper Americanin April 1828 by New York publishers and print sellers Behr & Kahl. However, once the tunnel officially opened to only pedestrian traffic in 1843, the design evolved. Vehicular traffic no longer appeared. 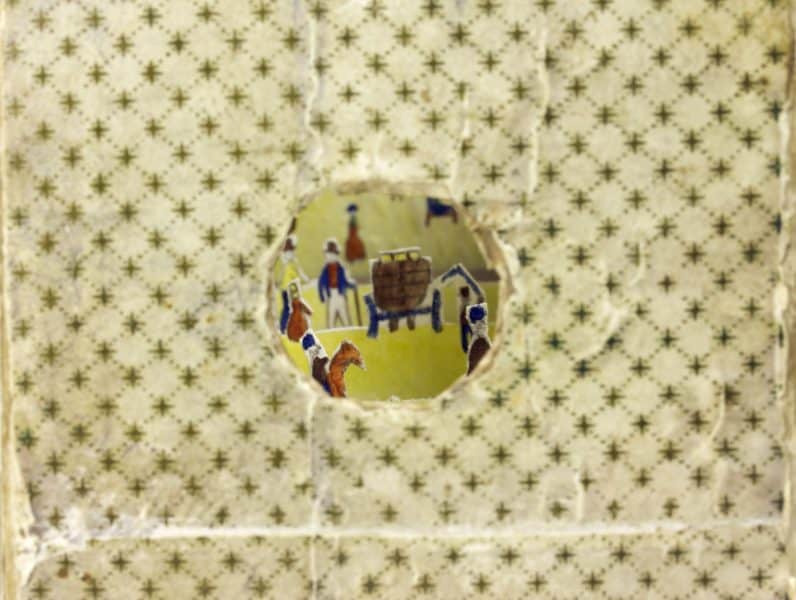 This change in design provides further clues to better understand a circa 1850 “homemade” tunnel book added to our collections in 2011. The similarities in the graphics depicting the interiors of the tunnels of Gouyn’s and our 2011 acquisition, particularly the style of a covered wagon, lends credence to our conjecture that the earlier acquired piece is modeled after a Thames Tunnel book, probably issued before 1843.

After 1843 and through the 1850s, “perspective view manufacturer” Bondy Azulay (b. 1813) became the primary manufacturer of these Thames Tunnel novelties. His manufacturing of the devices proved a more crude construction than earlier ones. His books also often included two to three peepholes on the front board. The design provided views of the tunnel traffic, as well as the river. Although the Library does not hold a Thames Tunnel book published by Azulay, we do hold his complementary 1851 eighteen-foot long Grand Panorama of London and the River Thames. 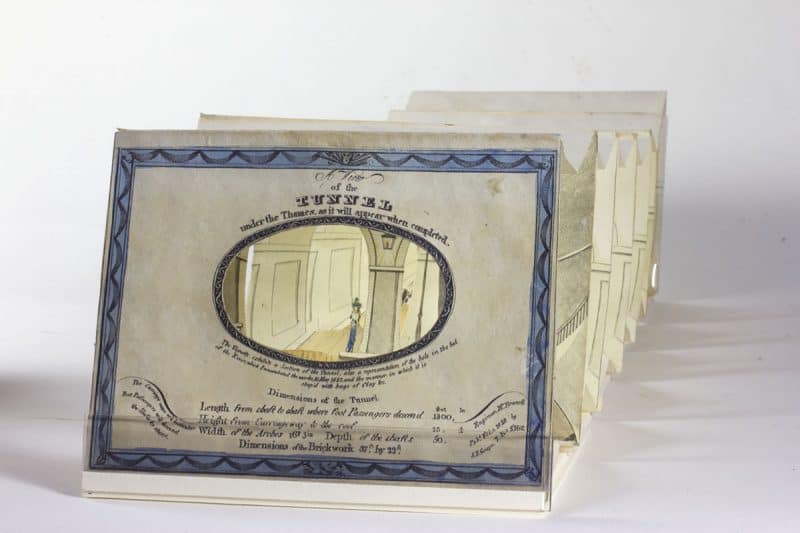 Oblique view of extended tunnel book A View of the Tunnel under the Thames, as it will Appear When Completed  (London: S. E. Gouyn, 1828).

By the early 1860s Azulay ceased to manufacture Thames Tunnel books. In 1865 the East London Railway Company purchased the tunnel. Pedestrian traffic halted and the tunnel became a part of the railway. Nonetheless, the “novel undertaking” of the Thames Tunnel still endures as novel. The numerous tunnel books created in its image continue to serve as novelties rich for the study of Trans-Atlantic visual culture during the Victorian era.