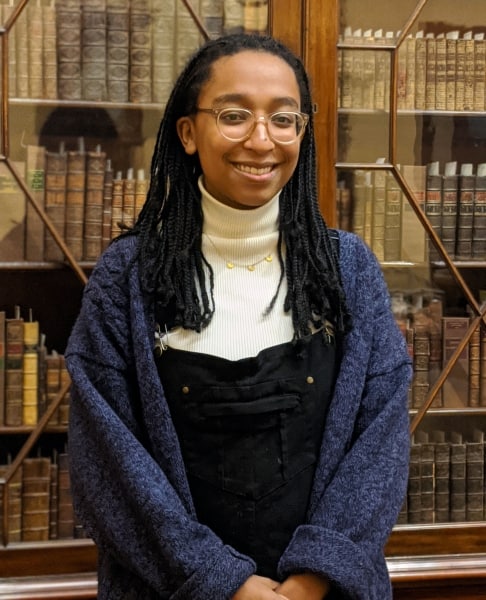 The Library Company is pleased to announce the hiring of Kinaya Hassane as the Graphic Arts Department Curatorial Fellow in support of Imperfect History: Curating the Graphic Arts Collection at Benjamin Franklin’s Public Library, a project generously funded by the Henry Luce Foundation. Kinaya received her B.A. with honors in Art History and a minor in History at Bowdoin College. While at Bowdoin, she was a Mellon Mays Undergraduate Fellow and wrote her senior thesis about the history of collecting African American art. Before coming to the Library Company, Kinaya was an intern in American Art at the Brooklyn Museum. Upon completing the fellowship, Kinaya plans to attend graduate school and pursue her Ph.D. in Art History, specializing in American art or art of the African Diaspora.

Kinaya will provide essential research and curatorial support to curators Sarah Weatherwax and Erika Piola as they prepare the exhibition, digital catalog, and publication for Imperfect History. The two-year project in commemoration of the Department’s fiftieth anniversary in 2021 will explore the evolution of American graphic arts curatorship and collections obtained over three centuries at Benjamin Franklin’s pivotal public library. It will make visible the often unseen people, places, meanings, and aesthetics  — “the hidden lives” — of the stewards, original artwork, and printed graphic materials representing the Library Company’s distinct, complicated, and imperfect history.

Imperfect History will frankly examine materials that are vital to the understanding of the nation’s complex visual history. The graphics uniquely represent the culture, politics, and biases of the eras in which they were created and acquired, as well as a spectrum of collecting and curation practices. Thanks to the Henry Luce Foundation, Kinaya will be integral to the implementation of this significant project for the Library Company and its history.