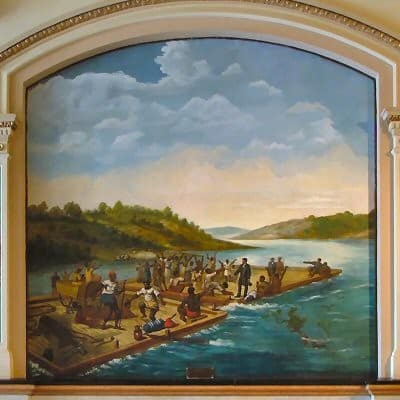 LCP Share Histories bring our Shareholders and members into direct contact with some of the most significant issues in our nation’s past.  In honor of Black History Month, we highlight Share 228, which reminds us of the moral choices facing an earlier generation, and vividly illustrates courage and commitment to human rights in opposition to enormous negative forces.

The extraordinary mural pictured here celebrates the moment in 1819 when 16 enslaved people were declared free by the man who had inherited them as property some years earlier.[1]  In an autobiographical essay written in 1844, Edward Coles (1786-1868), future LCP shareholder, described the reaction of the newly-freed people. The effect of his announcement

. . . was electrical. They stared at me and at each other, as if doubting the accuracy or the reality of what they had heard. In breathless silence, they stood before me, unable to utter a word, but with countenances beaming with expression that no words could convey, and which no language now, can describe. As they began to see the truth of what they had heard, and to realize their situation, there came on a kind of hysterical, giggling laugh. After a pause of intense and unutterable emotion, bathed in tears, and with tremulous voices, they gave vent to their gratitude, and implored the blessings of God on me.[2]

In the mural, Coles is the suited gentleman standing on the right bow of the farther barge. He was a Virginia native and son of a plantation owner who had served as President James Madison’s private secretary (1809-1815), and also envoy to Russia (1816). During his college years at William and Mary, Coles became strongly anti-slavery, influenced by discussions with his mentor concerning how Enlightenment ideals should and could be realized in human society. He came to believe that, “I could not consent to hold as property what I had no right to, & which was not, and could not be property, according to my understanding of the rights & duties of man— and therefore determined that I would not and could not hold my fellowman as a slave.”[3]  When Coles’s father died in 1808, Coles inherited the Rockfish Plantation portion of the family’s land, as well as human beings:  “Tom, Ralph, Ned, Bob, Kate, Molley, Franky’s Susan, Polly, Kate’s Betsy, Kate’s Tom, Rachel’s Nancy and Grace.”[4]  This put the question of rights and duties toward one’s fellow human beings squarely before him.

While his father lived, Coles kept his anti-slavery sentiments from his family, but after his father’s death, he informed them of his beliefs and his intent to act on them. He also wrote to Thomas Jefferson, a Virginia neighbor of the Coles family, imploring him to lead a national emancipation movement.[5]  Jefferson declined and tried to dissuade Coles from pursuing such an endeavor.[6]  Coles was committed to his ideals, however, and he vowed to leave “the scene of oppression (Virginia),” to find his future in a territory where slavery was prohibited.

In 1815, Coles embarked on a westward expedition into the free Northwest Territory (Old Northwest) to find an appropriate spot to settle, eventually coming to what was known as the “American Bottom,” a section of fertile land abutting the southwestern Illinois shore of the Mississippi River. He purchased substantial amounts of land, including several thousand acres in Missouri and Illinois.[7] He then began to make plans to move there, selling the Virginia land inherited from his father, and petitioning President Monroe for a federal position in the territory, which he visited again in 1818.  In March 1819, Monroe appointed him Register of Lands in the young state of Illinois.[8]

Later that spring, Coles met with his family’s enslaved people to let them know of his prospective move westward, and invited any who wished to come along with him.  Although his anti-slavery sentiments were known by that time, Coles said nothing to any of the enslaved about emancipation, which came, as the mural depicts, in the form of a surprise announcement by Coles while the travelers drifted down the Ohio River just a few miles west of Pittsburgh, en route to the new home in Illinois.[9]

When the travelers reached their destination of Edwardsville, Coles proceeded to record the emancipation for each individual, and to deed each male over age twenty-three 160 acres of his purchased farmland so as to provide a foundation for their economic security.[10]  For those who chose not to remain on the land but seek employment in nearby cities like St. Louis, Coles remained a benefactor, just as he did to two elderly women who had chosen to remain in Virginia.

Following his term as Register of the Land Office, Coles ran successfully for governor of Illinois in 1821. He proceeded to steer the state through a stormy period, working energetically with anti-slavery colleagues to defeat an effort to revise the Illinois constitution to permit slavery.[11]  In 1824, the anti-slavery forces prevailed, and Illinois remained a free state.  In addition, Coles used his office to advocate for internal improvements, sound banking practices and revision of the state’s harsh black code.  He also had to deal with hostile lawsuits claiming his personal act of emancipation in 1819 was illegal and therefore invalid.[12]  He ran for Congress in 1830, but was defeated.

In 1832, with his Illinois political prospects exhausted, Coles moved to Philadelphia, where he had abundant friends who felt similarly about ending slavery. He married a prominent socialite, Sallie Logan Roberts, whose family had figured in anti-slavery efforts over two generations, and became a LCP shareholder in 1838, holding Share 228 until his death in 1868.[13] The share then passed to his daughter, Mary Coles (1834-1920), who also inherited her father’s progressive outlook.  Ms. Coles was active in the Episcopalian Church, and a philanthropist and advocate for working women, for whom she ran affordable boarding houses, one of which is now a Philadelphia historical landmark (911-917 Clinton St.).[14]  In 1921, Share 228 was passed to her niece and Coles’s granddaughter, Virginia Campbell Coles Robbins (1870-1947), who held it until 1940, when it was passed on to her son, Oliver Wolcott Robbins (1911-1987). It was Mr. Robbins who donated the Coles family papers to the Historical Society of Pennsylvania, where they can be accessed by researchers. The Coles family possessed Share 228 for well over 100 years, bringing Edward Coles’s legacy of courage and moral commitment into the 20th century.

Today, that legacy continues to be supported through the generous donation of the current shareholder Carolyn Klepser, highlighting an emancipation effort that came 44 years before the signing of the national proclamation that would finally end slavery in America.

Become a shareholder today so that LCP can continue to pass on these stories of courage and commitment to future generations.

[9] Sixteen of eighteen slaves (five adults and eleven children) chose to join Coles. Coles also sponsored a man who was indentured to a neighbor farmer but who was married to one of the Coles’s slaves. Two older women decided to stay in Virginia for reasons of family and age. See Leichtle K and Carveth B, pp. 58-59, as well as Coles’s own account of the emancipation, “Emancipation,” 1827, Box 3, Folder 21, n.p., Coles Family Papers (Collection 1458), Historical Society of Pennsylvania.

[13] Edward Coles is buried in Woodlands Cemetery in West Philadelphia, with his family.

Talking in the Library: Season 2 Episode 6
Scroll to top