It is astonishing to me to think that it was almost exactly twenty-seven years ago that I began working in the Print Department. In January 1993 I moved from Harrisburg and my curatorial job at the State Museum of Pennsylvania to Philadelphia to start as the Print Department Assistant, a position with funding secured for only two years. At the time, the Library Company was undergoing a major renovation to both its interior and exterior. My introduction to the Library was through a back door which accessed the bleak alley way running behind the building. This morning, I walked in the front door, entering an institution which continues to evolve, but has stayed true to its core charge when I first started: to foster scholarship in and increase public understanding of American history by preserving and interpreting the valuable materials in its care.

In 1993 I joined a two-person department which was preparing itself to close to the public while the Library’s second-floor quarters were reconfigured and expanded.  The renovation removed collection storage from the Print Department’s reading room and created additional secure storage space for collection items. When I began my curatorial work in the Print Department, the collection was inaccessible, sealed behind large sheets of plastic to shield it from the dust and debris created by constructing walls, moving, and painting. And within a few days of my arrival, the assistant curator and I were displaced to the fourth-floor book stacks where a curatorial office had been carved out of a space near the elevator. For the next five months, I was the Print Department Assistant “once removed” and had few interactions with the graphics collection, or with any of my co-workers who had not made their way to the fourth floor to page a book for a researcher. 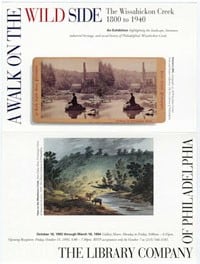 Invitation to A Walk on the Wild Side exhibition, 1993.

With very little of the graphics collection accessible, the Print Department staff answered few public research questions. We assisted no in-person researchers. Reproduction requests were answered on a limited basis. For material for which we did not have an existing negative or 35mm slide in this pre-digital era, a request could not be filled.  I administered loans and performed administrative tasks for what was to be our new gallery’s inaugural exhibition A Walk on the Wild Side: The Wissahickon Creek 1800 to 1940, and worked on creating a Notebook database of Philadelphia images in nineteenth-century illustrated periodicals. (Does anyone even remember Notebook?)

Looking back more than two decades later at the Library Company of 1993, I remember a quiet and rather insular institution, a place where an entire department could have little public interaction for almost half a year. The Library Company of 2020 possesses a much more outward face and today’s Print Department (recently renamed the Graphic Arts Department) is one whose staff and holdings are much more integrated into the Library Company as a whole than twenty years ago. The Graphic Arts Department’s staff and collections are providing the material and the leadership in promoting the Library Company’s digital humanities projects and in stressing visual literacy as a vital skill for 21st-century citizens. With the October 2019 launch of Imperfect History: Curating the Graphic Arts Collection at Benjamin Franklin’s Public Library, the staff will be even busier than usual. Through this blog, we plan to introduce ourselves to you and to keep you informed of our progress as we curate an exhibition, author a publication, create a video, and produce a digital catalog for Imperfect History, all to explore the Library Company’s graphics collection and curatorial history as we commemorate the Department’s fiftieth anniversary in 2021. Please join us on this fifteen- month journey!

Talking in the Library: Season 2 Episode 6