Imperfect History: Curating the Graphic Arts Collection at Benjamin Franklin’s Public Library is on display from September 20, 2021 to April 8, 2022.

Inspired by the fiftieth anniversary of the establishment of the Library Company of Philadelphia’s Graphic Arts Department, Imperfect History: Curating the Graphic Arts Collection at Benjamin Franklin’s Public Library  is a candid exploration of the history of the social dynamics and cultural biases affecting the construction of an American popular graphic arts collection developed  within one of the oldest cultural institutions in the country. The over 100,000 prints, photographs, original works of art on paper, and ephemera epitomize the evolution of this pivotal public library founded in 1731 by Benjamin Franklin and his discussion group, the Junto.

Originally comprised  of gifts and bequests starting in the 1730s from mostly white, privileged, male Library members, these graphics became the core holdings of an intentionally curated collection begun in 1971, an era when the role of art history in society was in flux and the relevancy of many of our democratic institutions was in question. The visual materials dating from the late 16th through early 20th centuries represent the culture, politics, and unconscious and conscious biases of the eras in which they were created and acquired, as well as a spectrum of collecting and curation practices over nearly 300 years. Imperfect History makes visible the often unseen people, places, meanings, and aesthetics—“the hidden lives”—of the pictorial records representing the Library Company’s distinct and  multifaceted history. Recognizing the complexity of these materials and their stories is fundamental to acquiring the visual literacy skills necessary to understand our nation’s complicated history.

Imperfect History is open free to the public Monday to Friday, 9AM-4:30PM. 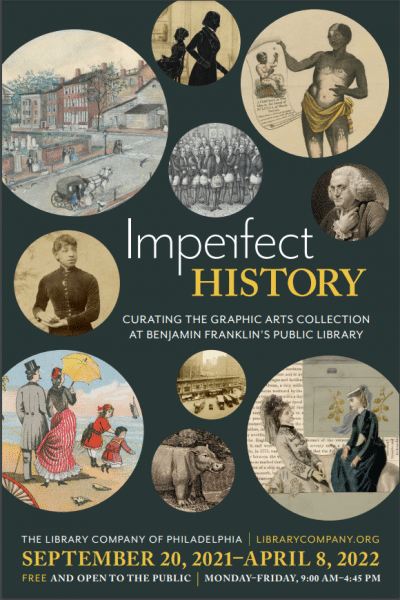