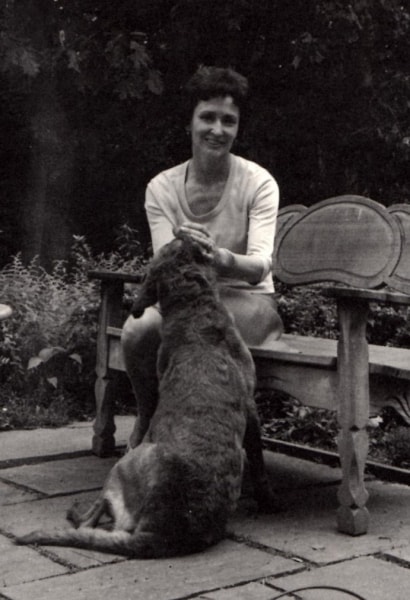 In observance of Women’s History Month, the Library Company of Philadelphia is proud to profile one of the shareholders of Share 197, Emily Weisberg Sunstein (1924-2007), whose activism helped to shape Philadelphia’s present and future and illuminate the literary feminist past.

Ms. Sunstein, a native Texan, earned a degree in English history from Vassar in 1944. She married Leon Sunstein, Jr., a Philadelphian, and soon became active in the city’s civic affairs. She was instrumental in helping to organize voters to elect Philadelphia reform mayors Joseph S. Clark (1952-1956) and Richardson Dilworth (1956-1962), who both worked to rid the city of patronage and corruption and implement the Philadelphia Home Rule charter approved by voters in 1951.[2]

During the 1960s, Ms. Sunstein became the chairwoman of the Philadelphia area chapter of Americans for Democratic Action (ADA), an organization founded in 1947 to support the pursuit of a progressive domestic agenda along the lines of FDR’s New Deal.[3] The ‘60s were a stormy period in Philadelphia’s social and political life, with riots and demonstrations in the streets. Ms. Sunstein stated in December 1967 that the ADA was “more concerned for the welfare of the city than at any time since the organization was founded in 1947.” She decried the polarization that fueled the violence and publicly advocated greater understanding and comity.[4] But Philadelphia was fractured by the same issues splitting the nation, a situation made worse by the city’s serious budget situation and further exacerbated in the 1970s by a combative mayoral administration.

While continuing some of her civic work in the 1970s, Ms. Sunstein turned her attention to scholarship, specifically to the lives of two progressive female writers.  She first focused on Mary Wollstonecraft (1759-1797), the celebrated and controversial author of “A Vindication of the Rights of Woman” (1792). Inspired by Virginia Woolf’s essay on Wollstonecraft in The Second Common Reader, and the Memoirs of William Godwin, Wollstonecraft’s philosopher husband, Ms. Sunstein authored her first book, A Different Face, The Life of Mary Wollstonecraft.[5]  Published in 1975, the biography entered a crowded field of previous studies and garnered only mixed notices.  Some reviewers applauded the book’s objective and sensitive approach, but felt too much freedom was taken in using Wollstonecraft’s novels to interpret her turbulent life. Others felt that Sunstein should have taken a more contextual approach toward Wollstonecraft and her work rather than emphasizing her relevance to the 1970s.[6]

Undeterred (and possibly further inspired), Ms. Sunstein spent the next 14 years researching and writing her next book, a biography of Wollstonecraft’s daughter, Mary Wollstonecraft Godwin Shelley (1797-1851),  best known for her marriage to the poet, Percy Bysshe Shelley, and for writing Frankenstein, or, The Modern Prometheus, a truly revolutionary novel.  This time, Ms. Sunstein wrote what proved to be a landmark study, Mary Shelley, Romance and Reality (1989).[7]

While previous biographers of Mary Shelley had paid little attention to her life in the years following Percy Shelley’s death in 1822, Ms. Sunstein assiduously chronicled Mary Shelley’s efforts to secure Percy Shelley’s poetic legacy in spite of his father’s powerful opposition.[8]  She also documented the intellectual support that Mary Shelley provided her poet husband and dispelled any doubts about the authorship of Frankenstein, in contrast to prior studies that depreciated her substantial learning and wide-ranging reading.[9]  Additionally, Ms. Sunstein illuminated the numerous ways Mary Shelley helped other women cope with the hypocrisy and sexism of the age, something she was often subjected to.  For example, she supported Carolyn Norton in her campaign to secure separated wives the right to petition for legal custody of their children, which until 1839 was prohibited by English law.[10] She also helped to perpetrate a successful scheme to create the impression of legitimacy for a friend’s illegitimate child, who otherwise would have been treated as a social outcast.[11]  Sadly, until the end of her life, she was ostracized by much of polite society for her youthful liaison with Shelley, who was a married man at the time of their 1814 flight from England.”

Ms. Sunstein’s biography was roundly welcomed in major academic journals as well as in the general press, and earned her the 1989 Modern Language Association’s Prize for Independent Scholars as well as the Philadelphia Athenaeum Literary Award.[12]

Like the women she wrote about, Ms. Sunstein engaged vigorously and progressively with her times. She also gave us more balanced portraits and a deeper appreciation of two important figures in women’s history. She acquired Library Company Share 197 in 1972, at the intersection of her activist and scholarly paths, and we take pride in celebrating her multi-faceted legacy during Women’s History Month.

Click here for more information on how you can become a shareholder or contact Raechel Hammer, Chief Development Officer at (215) 546-3181, ext. 142.

The Barakat Family in America

Talking in the Library: Season 2 Episode 7
Scroll to top