The Barakat Family in America 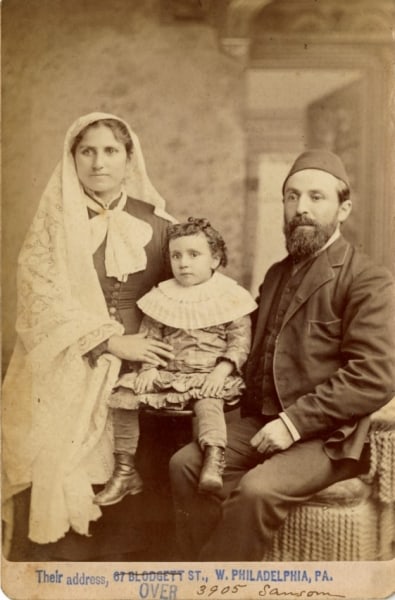 Recently we acquired this circa 1885 cabinet card showing the Barakat family, recent immigrants to the United States from Syria. Taken in an unidentified photographic studio, the photographer has posed the family in a conventional manner. The only hint of their potentially “outsider” status is the fez on Elias Barakat’s (1850-1909) head and the voluminous lace head scarf worn by his wife Layyah (1857-1940). This photograph was most likely created for business use by the Barakats, rather than personal use. The family’s home address is stamped at the bottom along with a hand-written note updating the location of the Barakat residence where the address of the photographic studio was usually placed. The names of the family members and  biographical facts about each are stamped on the card’s verso. 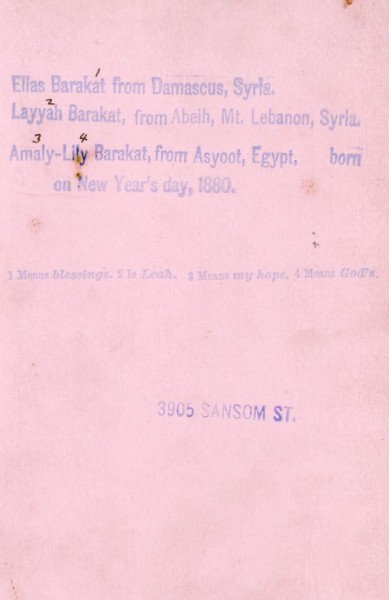 Soon after their arrival in America in 1882, the Barakats began to tour the country lecturing about their experiences as Christians in the Middle East and the tumultuous conditions they had left behind. This cabinet card was probably a souvenir available for purchase by attendees of these lectures. Philadelphia seems to have served as the Barakats’ primary residence, but both spent a great deal of time on the road, together as a couple and apart.  In 1884, for example, Layyah spoke in central Pennsylvania in February, Ohio in April, and Massachusetts in May. She returned for another New England speaking circuit in the fall, speaking at numerous engagements in Massachusetts, Connecticut, and Vermont. When home in Philadelphia, the family, which grew to include three children, lived in West Philadelphia. The 1886 Philadelphia city directory listed Layyah as an “Oriental Lecturer” and Elias is identified as an “Oriental Lecturer & Arabic teacher & importer of Bible Land Goods”  next to the Arabic spelling of their last name.

Sometime in the 1890s Layyah and Elias Barakat became estranged from each other and no longer lived together. Both continued to tour the country individually as public speakers. Layyah became active in prison reform and temperance groups in addition to lecturing about the Middle East. Layyah, however, seems to have faced some resistance to her participation in public life, since she was no longer a wife, not yet a widow, and the mother of relatively young children. When Elias died in Washington DC in 1909, for example, the announcement of his death appeared under the disapproving headline “Dies as Wife Makes Speech/Elias Barakat, Translator, Long Separated from Her/Passes Away in Washington Hospital-News Reaches Widow as She Addresses Audience.”

In the decades after her husband’s death, Layyah Barakat continued speaking to audiences around the county. The 1930 census lists the seventy-three-year-old Layyah’s occupation as a lecturer. She raised money for Syria and returned to her native country a few times, particularly in support of an orphanage named in her honor. In 1912 she penned her autobiography, A Message from Mount Lebanon, possibly the first autobiography written by an Arab-American woman. Over thirty years after the death of her husband Layyah died at the age of eighty. Often separated in life, she and her husband are buried together in Philadelphia’s West Laurel Hill Cemetery.