In late 1793, Philadelphia experienced the Yellow Fever epidemic. In the 1794 edition of Benjamin Banneker’s Almanac, there’s a piece titled “An Account of the Malignant Fever, which Prevailed in Philadelphia, 1793” that details the first encounters of the disease in Philadelphia. The first Yellow Fever appearance transpired in August 1793 when two Frenchmen took ill at Richard Denny’s lodging house on Water-Street. After their arrival several residents, including the owners Mr. & Mrs. Denny and their family, all died within a two week period. “From a comparative view of all the preceding circumstances – from the contagious nature of the disease, and from the resemblance of its leading symptoms to those of the yellow fever of the West Indies, there can be no doubt that the contagion, which gave rise to the disease here, was imported.” Some believed that either ship crew members or passengers brought it from the West Indies. Dr. Benjamin Rush along with other doctors provided the public with other reasons for spread of the Yellow Fever. 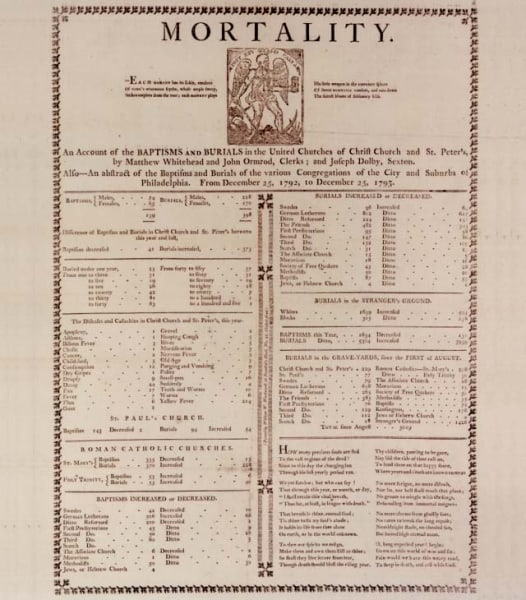 Bill of Mortality announcing deaths due to Yellow Fever.

Absalom Jones and Richard Allen coordinated with the black community for help to care for the sick and bury the dead during the Yellow Fever epidemic. No one wanted to assist with this cause out of the fear of dying. But there was belief that people of color were immune to the disease. After the fever subsided, a handful of accounts dealing with the Yellow Fever surfaced, one of those being from Mathew Carey, a leading Philadelphia publisher in the 18th century.  Carey accused African American nurses of price-gouging and stealing from the dead and dying. Furious of their reputation being tarnished after putting their lives in danger, Jones and Allen wrote a pamphlet, “A Narrative of the Proceedings of the Black People, During the Late Awful Calamity in Philadelphia” in protest, giving their account of events “declaring the facts as they really were.” Because they were working side by side with the black nurses, they were able to speak on the conduct and the behavior of them. By the time they paid the volunteers, paid to bury the dead and buy coffins, they did not gain any money and actually lost fianancially. Within a 2 month period, thousands were diagnosed and died from the disease.

Philadelphia is not new to the spread of infectious disease throughout its communities. In fact, within the last 250 years, Philadelphia is one of the few cities that have experienced several health epidemics from the spread of colonization and economic growth. As we experience this current state of the unknown, it’s important that we as a community remain calm! It’s imperative to remember what past generations experienced and learned from their mistakes.

Note to Future Self: A Project to Do at Home

With a Nostalgic Heart for Fairs Past
Scroll to top