While working on the Imperfect History project, I have become increasingly aware of the number of significant gifts women have made to the graphics collection since at least the later 19th century. Often times, these donations have been of family material passed down through the generations. Since women frequently fill a caretaker role in a family, it is not too surprising that they often acted as the custodians of a family’s tangible legacy as well, caring for photographs, paper documents, and ephemera accumulated by preceding generations. The Library Company has been the fortunate recipient of many such collections donated by women who realized the historical value of the material left in their care. This material has shaped the scope of our collection for more than a century and in many cases influences what material we continue to acquire.

In 1961 Elizabeth Sergeant Abbot (1877-ca.1970) made such a gift to the Library Company, donating the two volume Vegetable Materia Medica (1817-1818), A Flora of North America (1821-1823), and sixty-four original watercolors drawn for the texts — material that had been in her family since their creation by Miss Abbot’s great-grandfather Dr. William Paul Crillon Barton (1786-1856). Minutes for the 1961 annual meeting highlight the eighty-four-year-old Elizabeth Abbot’s “generous and thoughtful gift.” 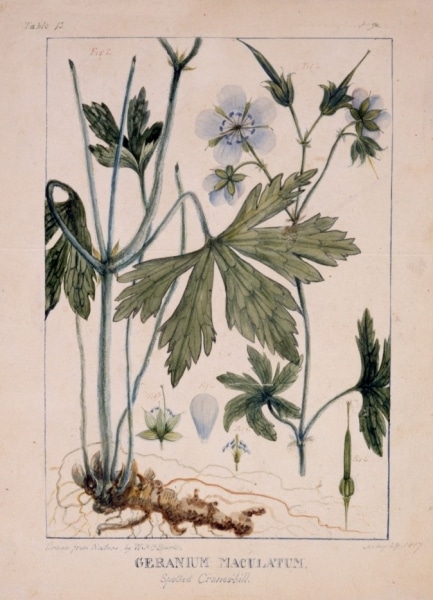 William P.C. Barton graduated from Princeton University and the University of Pennsylvania where he received a medical degree in 1808 and soon after entered into a decades-long career as a naval surgeon. He also maintained a lifelong interest in botany. His Vegetable Materia Medica and A Flora of North America are among the earliest botanical books with colored plates published in America.

Given the Library Company’s importance as a repository of early Americana, Elizabeth Abbot’s decision to donate the material certainly makes sense, but the Abbot and Barton families also had longstanding personal ties to the institution that undoubtedly influenced her decision. Miss Abbot’s father George Maurice Abbot (1846-1934) found lifetime employment at the Library Company, beginning as a fifteen year old boy and working his way up to his appointment as Librarian in 1907, a post that he held until 1929. Elizabeth Abbot inherited her father’s share (LCP Share #562) a few years after his death. Her paternal grandfather, Samuel Abbot (1807-1873) had also been an LCP shareholder (LCP Share # 695). Miss Abbot’s great-great-great aunt Mary Barton was one of the Library Company’s early female shareholders, acquiring LCP Share #35 in 1803.  Elizabeth Abbot also had familial ties to Phoebe Ann Ridgway Rush (1799-1857), whose money helped fund the construction of the Library’s Ridgway Building on South Broad Street in the 1870s. Donating the books and watercolors to the Library Company might not have seemed too much removed from having them remain in the family’s possession. 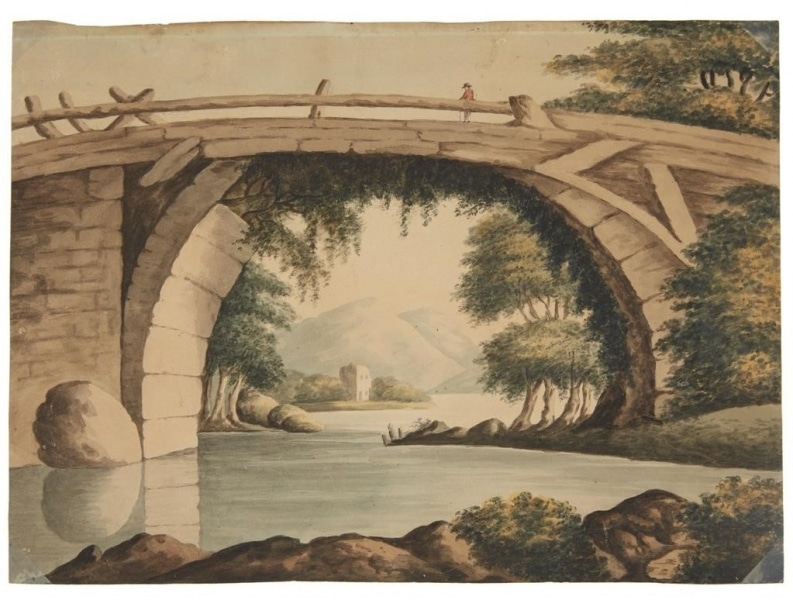 Nearly sixty years after receiving Elizabeth Abbot’s gift, we had the opportunity to expand the lens through which we view the Barton family when Freeman’s Auctions offered for sale two watercolors by Mary Rhea (b. 1795?) and Hettie [Esther] Ann Barton (1782-1857). These two young women were identified in the auction catalog text as the daughters of Elizabeth (1759-1796) and William Barton (1754-1817), a lawyer, scholar, heraldist, and the co-designer of the Great Seal of the United States. My interest in acquiring these landscapes, however, was not driven by Mary and Hettie’s famous father, but rather their ties to their brother William P.C. Barton whose work was already in our collection.

William P.C. Barton’s watercolors were included in the Library Company’s Quarter of a Millennium catalog, a record of the library’s most significant acquisitions during its 250 year history. The catalog entry stated that according to tradition, William’s wife Esther had been the artist of at least some of the items, but that none of the watercolors was signed by her, nor was other evidence found to support that claim. Perhaps over the years, family tradition became confused over which Esther/Hettie (wife or sister) enjoyed painting, even if neither was responsible for the creation of the botanical watercolors. With the acquisition of our new watercolors, we now have concrete evidence that William was not the only member of the Barton family with artistic leanings. Re-examining our graphics collection with fresh eyes is one of the goals of Imperfect History and our recent acquisition has allowed us to highlight multiple generations of women in the extended Barton family. Elizabeth Abbot’s gift was made in 1961, but more than a half century later, we are still able to learn more about it and place her donation in a larger context.