When I joined the Library Company’s staff in October of last year, one of the tasks I was assigned was promoting the Graphic Arts Department’s collection on the organization’s various social media platforms. In order to do so, I would spend a lot of time on the Library Company’s digital catalog familiarizing myself with the Department’s holdings. It was during this time that I came across a striking political cartoon, The Irrepressible Conflict. 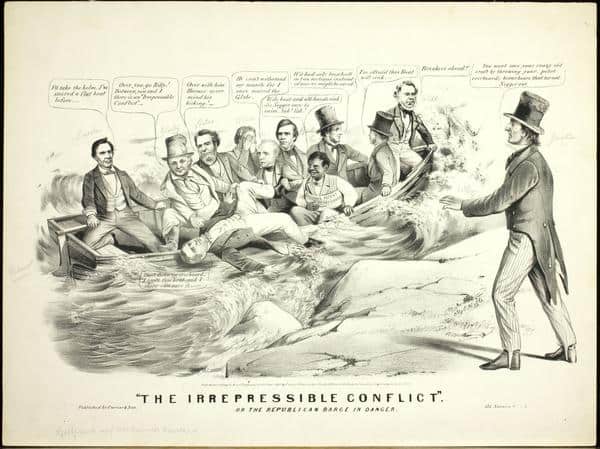 The title of the cartoon, The Irrepressible Conflict, is a direct reference to an anti-slavery speech given by William Seward in 1858 which pointed out the incompatibility of American democracy and chattel slavery. At the time of the speech, Seward was seen as the likely Republican nominee in the upcoming 1860 presidential election. However, members of the Republican Party feared that Seward’s views on slavery were too radical to make him a viable candidate for office. The Party instead threw its weight behind the eventual president, Abraham Lincoln, who held more moderate views on the issue and stood a better chance against the pro-slavery Democratic Party’s, John C. Breckinridge.

The scene in the cartoon depicts, in a very literal way, how the Republican Party threw Seward “overboard” in favor of Lincoln. In addition to portraying major political figures, the cartoonist depicts Brother Jonathan (Uncle Sam’s predecessor who represents the stereotypical Yankee) standing on the shoreline and suggesting that instead of getting rid of one of their own, they should be throwing the Black man overboard. One reading of the cartoon reveals its references to the complicated nature of antebellum electoral politics and the compromises that were made for the sake of victory. However, an alternative analysis can reveal the work’s more subtle references to anxieties about African Americans and their place in society.

Examining certain visual elements of The Irrepressible Conflict prompts questions about the uncertain fate of America’s racial caste system in the face of great political upheaval. The one that stood out the most to me was the purposeful inversion of the era’s standard racial hierarchies through the depiction of Seward falling downward into the water while the unnamed Black man sits above him in the rowboat. This inverted pyramid is meant to portend what the cartoonist perceives as the sacrifices white Americans will end up making for the sake of African Americans.

As I continue to work with my colleagues in the Graphic Arts Department on our ongoing project, Imperfect History, objects like this political cartoon remind me of the importance of considering the multiple ways in which a visual work can be interpreted. Learning to parse out these various interpretations can lead to a richer understanding of history, particularly as it pertains to the plight of marginalized groups.

“Myself and the World”: Women Empowered by the Bicycle

Fireside Chat: The Mysteries of the “Lost Colony” and the Iroquois...
Scroll to top