Stolen and Recovered, or the Wandering Watercolor

As the title Imperfect History implies, one of our goals of this project has been to provide a more nuanced story of the Library Company’s long history relating to our graphic holdings, including our less than stellar moments along with our many noteworthy accomplishments. This blog post tells the 20th-century tale of a watercolor that was taken from the Library Company, but four decades later found its way back to us.

On the verso of this watercolor it is noted that this item came to the Library Company from the collection of Samuel Castner, Jr. (1843-1929). Since its acquisition was not officially recorded in our accession books, however, it is not known when it became part of the Library’s collection or if it was a gift or purchase. Castner, a Philadelphia industrialist, gained a reputation as a major collector of Philadelphia visual material by the late 19th century. In 1861 when this watercolor was painted the small and rather dilapidated Fulton House was a saloon advertising lager beer to its potential customers. The saloon’s name paid homage to the site where Robert Fulton (1765-1815), whose fame largely rests on his success with perfecting the steamboat, had served an apprenticeship in the early 1780s. Sources disagree about whether Fulton’s apprenticeship was with a watchmaker, a silversmith, or an optician.

Like most of the Library Company’s graphic acquisitions in the 19th and early 20th centuries, this watercolor was seen primarily as a decorative object, something to be framed and put on the Library’s walls, rather than used as a primary source. Authors Francis Brandt and Henry Gummere, however, noted the presence of the watercolor in terms of both its historical and decorative value in their book Byways and Boulevards in and about Philadelphia, published in 1925. “At the Philadelphia Library Company, Juniper and Locust Street, midway on the western wall of the rear reading room,” wrote Brandt and Gummere, “we find a sketch of the house in which Robert Fulton was an apprentice to a watchmaker, on Second Street above Walnut.” A stop at the Library to view the watercolor was part of their “Fulton & First Steamboat” tour itinerary.

At some point in the 1930s, the Fulton House watercolor was stolen. Evidence of how, or even if, that crime was reported to Library Company shareholders at the time it occurred has not been found. There is no mention of this theft in the annual reports from the 1930s retained in our institutional archives. Perhaps news of yet another blow to the financially struggling institution may not have been what the Board of Directors wanted to share with the membership.  Library Company shareholders may have heard about the theft for the first time in 1970 when Librarian Edwin Wolf recorded the watercolor’s return in that year’s annual report. William Baldwin, owner of Baldwin’s Book Barn in nearby West Chester, Pennsylvania brought the watercolor to the Library, but it was not made clear how he knew the artwork belonged to the Library Company. The fate of “a few other small Philadelphia sketches which hung in that room [Juniper Street reading room]” and had been stolen in the 1930s along with the Fulton House watercolor remained unmentioned.

From 1970 until 2019 the Fulton House watercolor lived quietly in its archival box in graphics storage. As part of our backlog of items not in our online catalogs, it remained underutilized by researchers since the path to accessing it largely depended on the memory of a staff member. New interest in the watercolor emerged in June 2019 when a local auction house sold an oil painting of a similar scene with a contemporary manuscript note on the verso identifying the artist and providing provenance information: 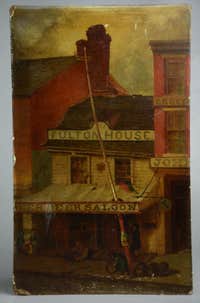 We can now identify the JMF initials on our Fulton House watercolor as belonging to John Mackie Falconer (1820-1903) and understand more about the artwork’s creation. Our watercolor has now been digitized and cataloged. With the physically stolen item returned and the intellectually missing item cataloged, our Fulton House watercolor is now readily accessible to researchers. And the process only took about ninety years! As we have been reporting through our blog posts—our history is sometimes imperfect.

Fireside Chat: The Fabric of Empire: Material and Literary Cultures of the Global...