While the Library Company is better known for its history as the first circulating library in America, it was also home to a wide array of strange and exotic objects. Early volumes of the Directors’ Minutes between 1762 and 1802 note some of these acquisitions, including a mummified hand sent to the institution by famed American artist Benjamin West (which is now held in Library Company’s Art and Artifacts Collection), an apron that belonged to a woman living in a Surinamese maroon community, and a Wampum belt that was purportedly gifted to William Penn. The Directors’ and the donors’ interest in these objects was likely informed by a broader collecting tradition in the Atlantic world known as cabinets of curiosities. The popularity of these displays, which were often owned by members of the aristocracy, coincided with Europeans’ increased contact with African and indigenous cultures of the “New World.”

This collecting practice was a prototype for the modern museum. The system is based on white Europeans and Americans casting a penetrating gaze toward “the Other” and set the terms for the traditions and policies that continue to govern cultural institutions. This mindset went hand-in-hand with imperialistic exploration, the rapidly growing global trade in enslaved Africans, and the development of new technologies that aided in colonial projects. The camera was among these innovations and its invention resulted in countless images of non-white people by white photographers. 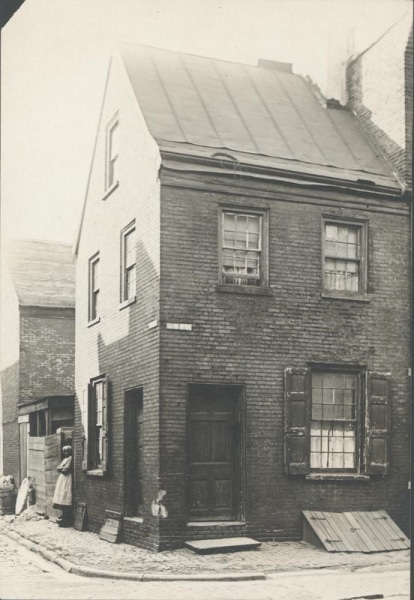 George Mark Wilson, “What do you all want to do wif dat pixture tak’en contraption,” ca. 1923. Gelatin silver print.

The Library Company’s Graphic Arts Collection is home to a large number of these kinds of images, most of which were taken in Philadelphia as opposed to places far afield. For instance, an image and manuscript notes by amateur Philadelphia photographer George Mark Wilson (1879-1925) document an encounter between him and a local African American woman whose house he was attempting to photograph. When she first notices Wilson outside her home, the anonymous woman asks him what he’s doing with his camera and objects to him using it to capture her likeness and the exterior of the building. Although she eventually obliges Wilson, her decision to stand at the back corner of her house with her arms crossed could be interpreted as her way of resisting his and the camera’s gaze.

The prevalence of such voyeuristic imagery is what makes counterexamples in our collection even more remarkable. My favorite is from the Stevens-Cogdell/Sanders-Venning Collection (SCSV). The image depicts a group of schoolchildren and a teacher looking directly into the camera’s lens. It’s a compelling photograph, in large part because of the depth created by the two lines of children on both sides of the photograph that lead to a single point: the teacher, who is likely Mary Venning. 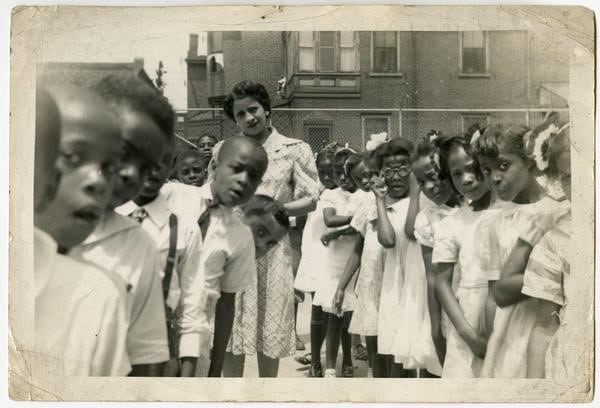 On its surface, the photograph is a playful one, as we are able to see the students’ collective curiosity in response to the photographer’s presence. However, it is also a significant rebuttal of the colonial and racist conditions from which the practice of photography emerged. Not only is this because the photograph rejects the caricatures of African Americans that were popular in the late 19th and early 20th centuries. It is also because we the viewers are no longer part of an anonymous body of people who are peering at these Black subjects without their permission. Instead, the traditional gaze is turned on its head and we are being observed. 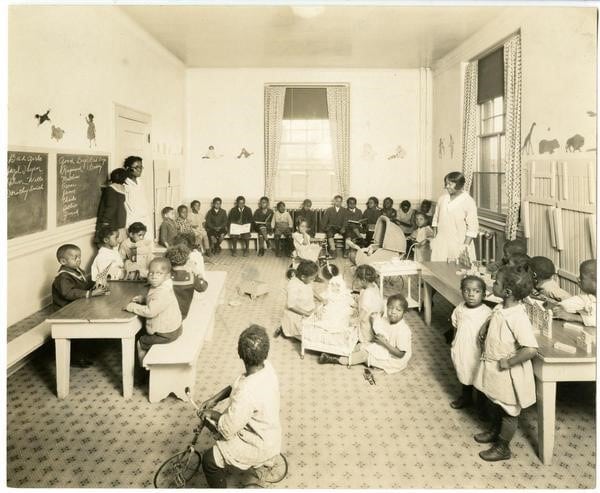 The photograph also stands in opposition to some of the other depictions of Black children in the Graphic Arts Collection. The students in this image taken by the commercial firm Photo-Illustrators are further away from the camera’s lens and they are scattered throughout the classroom, seemingly oblivious to the presence of the photographer. This gives viewers the sense that they are a spectator or a fly on the wall, endowed with the freedom to stand aside and gawk at a scene without consequence or acknowledgement. 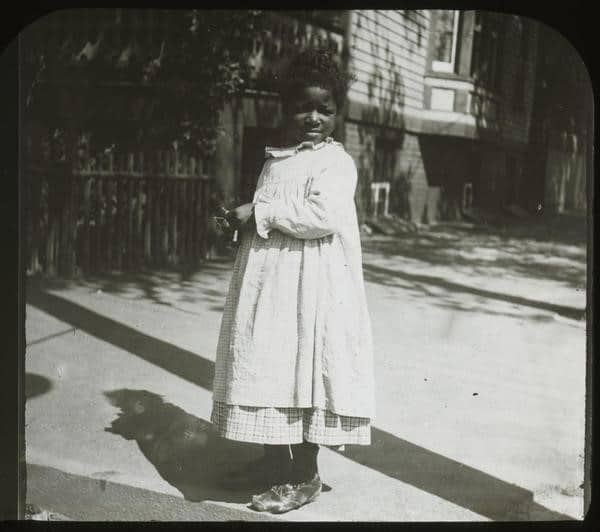 Another image that evokes the extractive nature of photographers’ relationship with Black children is one taken by an unidentified member of the Columbia Photographic Society, an amateur photography club in Philadelphia. The lantern slide is titled “A Study in Chocolate,” encapsulating how photographers saw capturing the likeness of Black people as a means of experimenting with the medium.

The Stevens-Cogdell/Sanders-Venning Collection photograph flips this traditional relationship between photography and Blackness. Unlike the Photo-Illustrators firm’s photograph, which is positioned in a way that makes us feel like we are standing above the children at a distance, the maker of the SCSV photograph is positioned at the children’s level, putting us eye-to-eye with them. And unlike “A Study in Chocolate,” which shows a lone girl faced with the implicit power of a white person with a camera and deprived of her interiority, the school children in the SCSV photograph make up a collective that peers inquisitively at the observer.

As I approach the end of my tenure at the Library Company, I am heartened by the conversations brought about by the Imperfect History project and the underrepresented communities documented in the institution’s collections. For the Library Company, I believe that Imperfect History is a step in the right direction, particularly when it comes to the concrete steps that have been taken to be transparent about the institution’s legacies and to highlight the agency of people who were previously relegated to the margins of history. This work, however, is just the tip of the iceberg. My hope is that the Library Company and its peers can continue to meaningfully engage with overlooked objects in their collections while also proactively and even radically reworking the purpose and function of cultural institutions to meet the demands of the current moment.