The following post was authored by Imperfect History Digital Catalog guest cataloger Joy O. Ude about her experience writing for the platform. The Imperfect History Digital Catalog creatively engages with the Imperfect History exhibition themes of (un)conscious bias and multiple viewpoints. Four guest catalogers from the curatorial, art history, and studio art fields authored concise descriptions of the same visual material, from their individual perspective as affected by their discipline. A traditionally standardized, “objective” process was made pro-actively subjective and diverse. 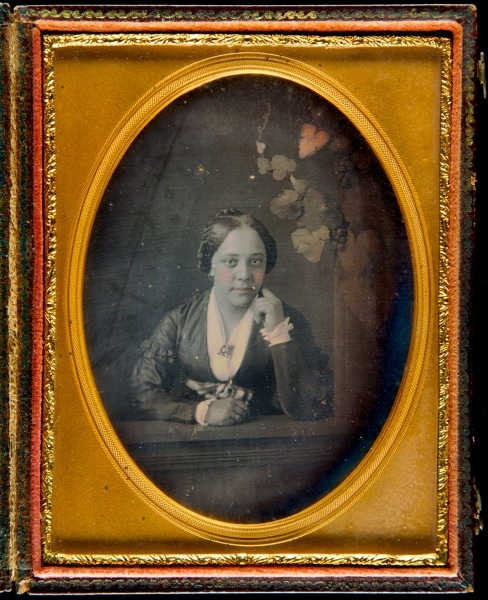 I’m not a writer. I know that I’m capable of writing well, especially when the subject interests me, but that doesn’t necessarily make me an adept writer. So, it was with both interest and an underlying sense of anxiousness that I accepted the invitation to participate in writing descriptions for the Imperfect History digital catalog. Even after reading the project prospectus and understanding that my task as a guest cataloger was to write authentically as I observed the visual materials, it took me some time to draft my descriptions. As a studio artist, educator, and member of an artist-run gallery, it was difficult not to slip into using the didactic language typical of curated shows as I began to write.

Not long after receiving the Imperfect History prospectus, the early impact of the pandemic began to ripple through the city of Philadelphia. Initially, I worked from home; I was furloughed soon after. In the middle of a burst of creativity—writing, curating, and producing various works—I had to stop and assess whether remaining in Philadelphia was the best decision for my family, livelihood, and career. I made the decision to move back to Texas, to be closer to family and become a certified elementary art teacher. Between studying for certification exams, interviewing for teaching positions, and packing my apartment and studio, my creative projects ground to a halt. When I’d finally settled somewhat into my new district and teaching position, I also received the disappointing news that my husband’s visa petition might be delayed because  of changes to U.S. immigration laws. We’d been separated for nearly a year, and the news was a crushing blow to the hopes that we might be reunited by the beginning of 2021.

Why have I chosen to divulge so much personal information in a post meant to reflect on my experience writing descriptions for Imperfect History? All this serves to provide some context for the lens through which I reviewed and weighed the works for the catalog. Though much of my personal work considers identity, several personal and national events from the previous year tempered my commentary on some of the visual materials. What does identity, real or assumed, mean now in the U.S.? Can people’s implicit biases be unlearned?

These were the questions I asked myself repeatedly as I looked over Portrait of an Unidentified African American Woman. The daguerreotype reminded me so much of the popular, stylized West African portraits that I’d seen my grandmothers, aunts, and mother featured in—the direct gaze into the camera, fixed posture, and with an air of confidence. While the black and white images may share some visual similarities, the individual stories of these women couldn’t be more different. Those  matriarchal family portraits were taken long before my mother immigrated to the U.S. from Nigeria in the 1980s. Decades before she knew anything of abject racism and how the painful history of slavery in this country would shape her experience, both as a student and eventual U.S. citizen. I couldn’t help but wonder about the life and story of the unidentified woman in the daguerreotype. Her photo was taken in Philadelphia, about a decade prior to the end of slavery. In comparing her portrait to my mother’s, it felt almost as though she could serve as a visual harbinger. Like a confirmation of ingrained dignity that refuses to be diminished, no matter the various indignities one may have suffered.

This dignity that was ingrained despite living in a time when a whole race of people were subjected to grotesque caricatures that depicted and reflected that they were seen not as human, but as cartoons. This dignity that was ingrained despite the racist tropes that perpetuated false narratives of the ignorance and moral depravity of Black Americans. I thought about the fact that an image like Unidentified Woman is  a rarity in elementary and secondary history books and that I wanted to know more about this woman’s experience. In this country, which stories deserve to be told? If they don’t reinforce long-held assumptions, are they simply ignored? More than anything, the daguerreotype makes me wonder what representation of Black Americans in the U.S. will look like ten, twenty, and fifty years into the future. I hope that dignity will remain intact.