The World at Your Fingertips: Restoration of the Library Company’s Globes

Thanks to the generosity of the McLean Contributionship, we are grateful that two more objects in our extraordinary Art & Artifacts Collection have been conserved.

Globes, once an object held by elites, became in the 19th century commonplace in schools, libraries, and private homes. They could be mass produced at a reasonable cost making them affordable and accessible to the middle class. The map would be printed on paper strips called gores and pasted onto the sphere. The orbs were mostly made with inexpensive materials, such as papier mâché, cardboard, or cork. The invention of lithography allowed globes to be printed in color rather than hand colored, which decreased the labor and cost.

The Library Company owns two eighteen-inch globes mounted on wooden stands. One is a celestial globe, which displays the stars and zodiacs. It is labeled, “Loring’s Celestial Globe Containing all the known stars, Nebula &c … Boston, Josiah Loring, Washington St., 1841.”  The other is a terrestrial globe, which represents the Earth, and is labeled, “Loring’s Terrestrial Globe Containing all of the Late Discoveries and Geographical Improvements … 1851. Manufactured by Gilman Joslin Boston.” 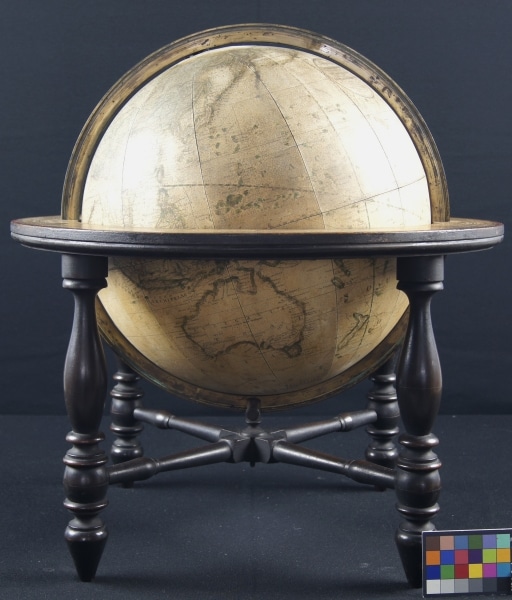 Josiah Loring (1774-1840) was a stationer, publisher, bookbinder, and globe maker. He began selling globes in 1832. The orbs came in numerous sizes with twelve inches being the most popular. Loring won a gold medal at the 1839 exhibition of the Massachusetts Mechanic Association for his craftmanship. The Association noted his globes “perfect sphericity, the exactness of its balance and suspension, the smoothness of the surface, the beauty and correctness of the copperplate, and the elegance of the mounting, unite to render these Globes the most excellent of their kind, that have ever been examined by the Committee.” Globes had to be functionable and also attractive.

Gilman Joslin (1804-1886) began working as a wood turner and looking glass maker. In 1837, he started working for Loring and soon took over his business in 1839. He continued producing and selling globes under Loring’s name as well as his own. This is why the Library Company’s globes bear the Loring name though they were made after his death in 1840. By 1850, Joslin’s business grew, and he employed five workers. His son, William B. Joslin (1843-1918), joined the firm in 1874, which was renamed Gilman Joslin & Son. They went on to become prolific American globe makers and continued operation until 1907.

Schools were a huge market for the Joslin company’s globes. In their 1880 publication How to Use a Globe, they assert “the City of Boston … has recently purchased for their use one or more of Joslin’s Globes for every school-room above the primary grade throughout the city.” In the book, Gilman Joslin & Son assert that their globes were accurate and up-to-date, reflecting all political changes to the map. It also featured exercises utilizing the globe, including calculating latitude and longitude and sunrise and sunset.

The Library Company has a number of books that explain how teachers could use globes as an educational tool in conjunction with lesson plans on geography, math, and astronomy. Silas Cornell’s terrestrial globe came with a manual that indicated it was “intended for the use of schools, academies, and families.” He provided lessons with questions that the teachers could pose to students to enable them to learn terms about the earth, such as axis and hemisphere, and how to identify the locations of countries, cities, oceans, and other important landmarks. James M’Intire’s A New Treatise on Astronomy and the Use of Globes presented over three hundred pages of information for using globes to teach astronomy and noted, “in all our schools and institutes of education, male and female, astronomy is justly becoming a favorite study.”

An album in the Library Company’s collection contains photographs of students in class at the Ogontz School for Girls in Elkins Park, Pa. showing the practical use of globes, in conjunction with charts and maps, in astronomy and geography instruction. 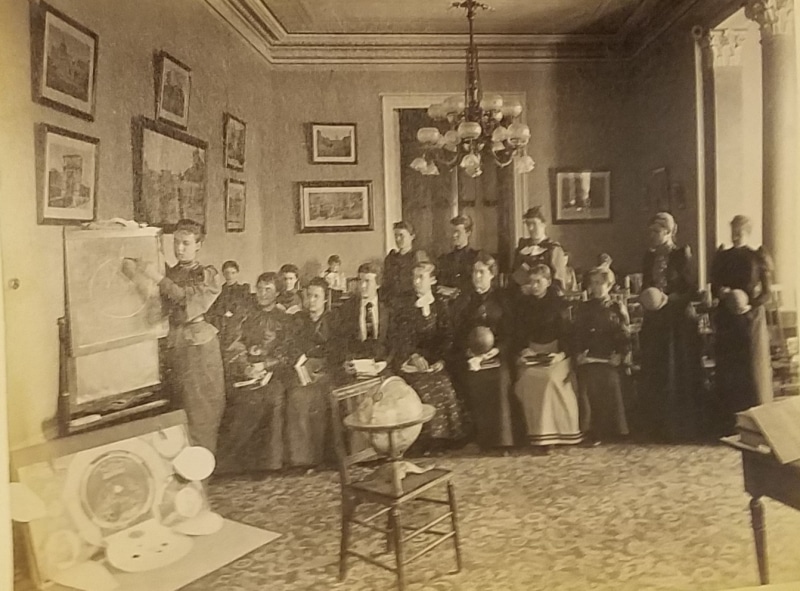 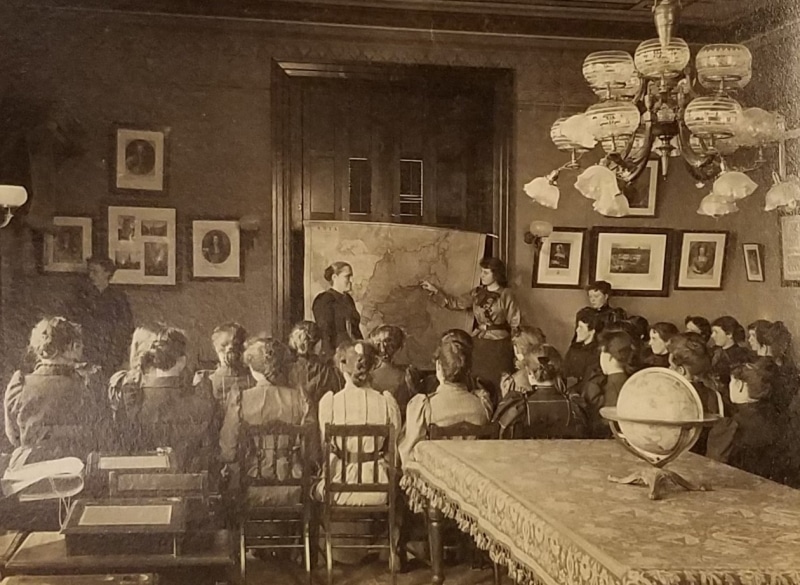 Trade catalogs illustrated the variety of options available with different stands and mounts. Manufacturers marketed their globes to educational institutions and also showed individuals how they could decorate their homes with globes. J.L. Smith’s catalog proclaimed that, “a good globe is as essential in every school-room as an English dictionary or a black-board.” He listed prices ranging from the highly ornate globe meant to decorate the parlor to the less expensive one for the classroom. 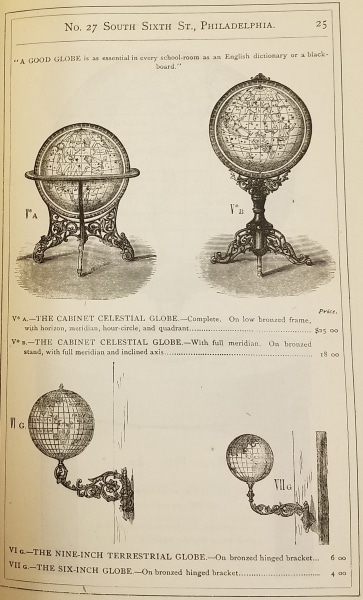 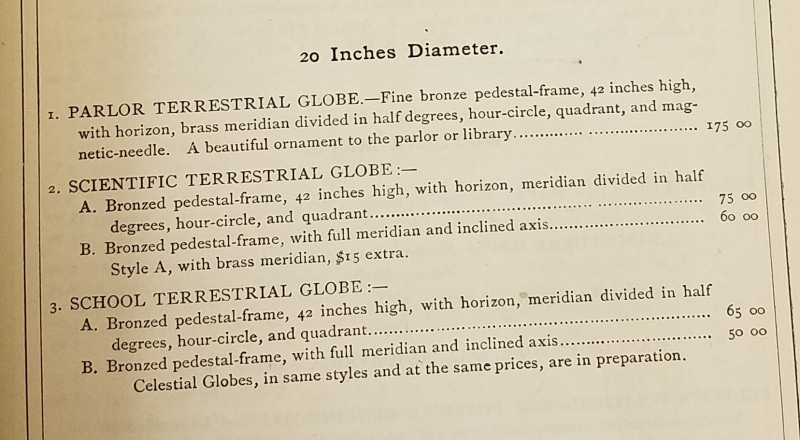 J.L. Smith, Catalogue and Price-List of Maps, Atlases, Globes, and Other Geographical Works (Philadelphia, 1874), 25 and 27.

The Library Company’s records do not mention when our globes came into the collection. But they appear in images of the Library’s interior spaces. Artist Colin Campbell Cooper, Jr. (1856-1937), in his 1879 drawing, illustrated one of the globes resting on top of the card catalog inside the Library’s Fifth Street building. 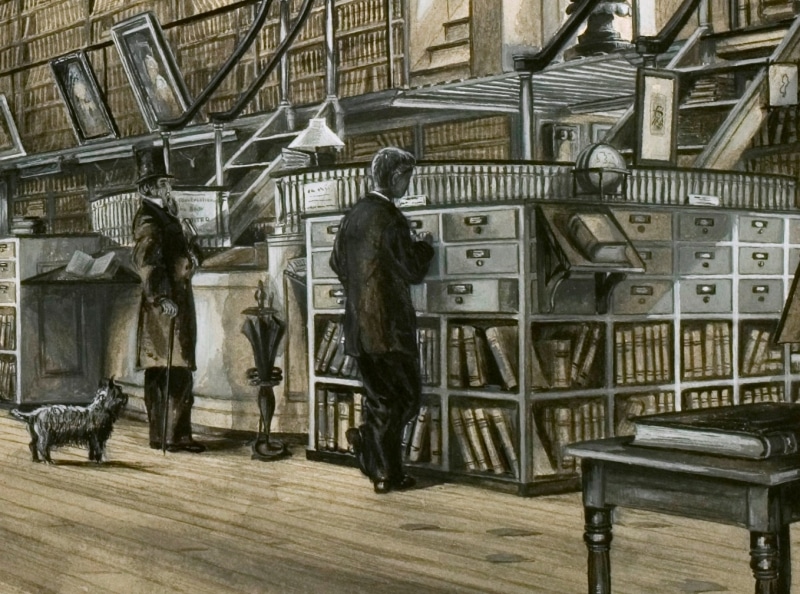 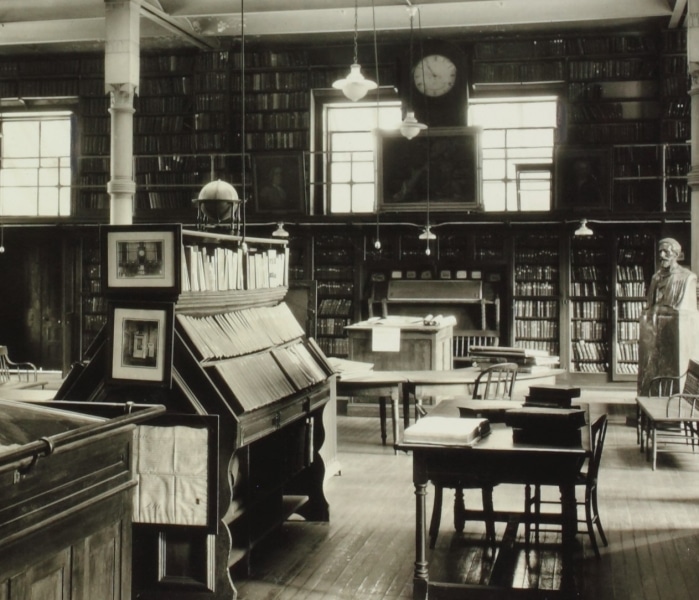 The Library Company occupied the building on Juniper Street from 1880 to 1935. An early 20th-century photograph taken in the reading room shows the globe standing atop a book case. 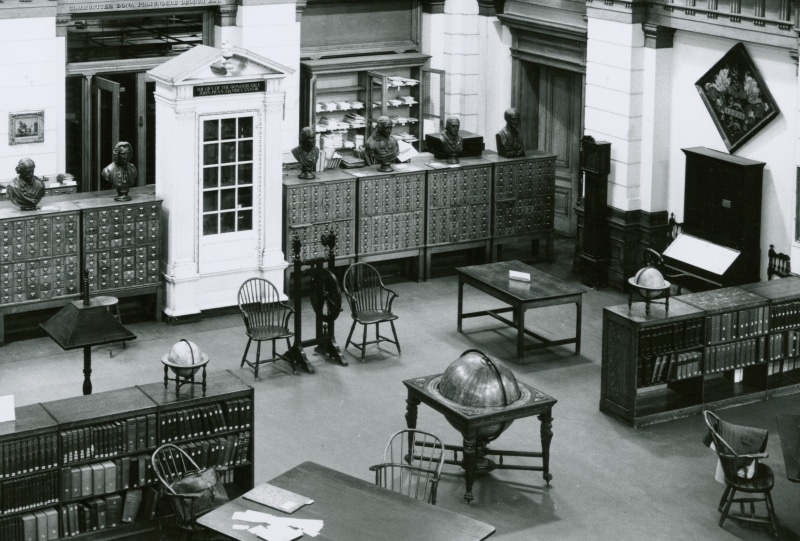 The globes moved once again to the Library Company’s Ridgway Building on South Broad Street. A photograph taken in about 1940 shows both globes, again in the reading room. This time they stand on book shelves. A massive globe occupies the space between the reading tables and the card catalog. The Library Company did not keep this globe when we moved into our current building at 1314 Locust Street, and it is no longer in the collection.

Globes are dynamic objects with moving parts that require touching to access the information. This makes them susceptible to damage from handling and exposure. They are also composed of different materials with distinct concerns, making them complicated to restore.  Conservator Corine McHugh worked on conserving our pair. She removed dust, grime, and soot that had accumulated over many years. The paper gores that the map was printed on were still adhered to the sphere. Often the paper begins to lift up. Structurally, the globes are in good condition and move smoothly. It is a testament to the quality of work from Gilman Joslin. It might also be speculated that since the maps would have been severely outdated, the globes most likely were not handled regularly. They probably had been decorative objects and later seen as historical artifacts. We are pleased they can be enjoyed for many more years to come.