Investing in Life: Insurance in Antebellum America (Studies in Early American Economy and Society from the Library Company of Philadelphia, 2010). Written by Sharon Ann Murphy. 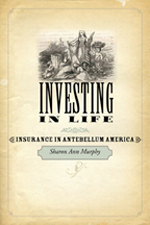 Studies in Early American Economy and Society, a collaborative effort between the Johns Hopkins University Press and the Library Company of Philadelphia’s Program in Early American Economy and Society (PEAES), promotes discussions and gatherings of scholars who wish to advance our understanding of the early American economy under the umbrella of numerous disciplines, methodologies, and subjects. In this latest title in the PEAES monograph series, Sharon Ann Murphy traces the development of life insurance in the early republic, both as a new idea regarding the protection of families in the face of calamatous events, and as a new kind of business that invested company funds and made judgments about who, and how much, would be paid to survivors.

Insurance in Antebellum America traces how early Americans moved beyond earlier mutual aid and benevolent societies, as well as private charities, in their search for better ways to protect families made vulnerable by a dissying array of social changes. In a nation undergoing deep transformations of households, workplaces, entrepreneurial sites, and cultural arenas, life insurance was touted as a valuable safety net for the emergent middle class. Murphy’s meticulous research in company records, advertising literature, and the popular culture reveals that the business of insurance had many layers worthy of our attention. One of these layers involves the savvy entrepreneurs who believed incorporated life insurance would attract myriad small investments from concerned families, which would in turn create available capital for the incorporators to loan to their own businesses. In another layer of Murphy’s study, we see how the new insurance company directors developed a discourse about investing in the limits of human life in order to protect loved ones who survived, a discourse that required Americans to contemplate making ethical choices about protecting their families by embracing an untested capitalist enterprise. In yet another layer of Murphy’s analysis, readers discover how insurance agents and marketers entered private lives to determine who was eligible to buy policies – the assessments of a person’s physical health, examinations of both bank accounts and bodies, and judgments about a potential policyholder’s temperance and longevity .

Murphy’s study takes a long view of life insurance across most of the nineteenth century, through the challenges of economic depressions, state government interference with insurance company objectives, and a degree of initial public hostility to these novel enterprises. Her careful reconstruction of levels of investment in the major insurance companies demonstrates the tremendous growth of policy sales and Americans’ eventual eagerness to secure the peace of mind and guarantee of a payout, should an insured loved one die. At first organized as stock corporations, the transition to mutual insurance companies – in which individual policyholders, not corporation stockholders held the capital – further deepened middle-class commitment to this new business culture. And a deep intellectual change, argues Murphy, was occuring alongside the insurance business’s explosive growth in the early republic: insurers carefully crafted and marketed the image of protection for widows and orphans that would come from paying insurance premiums that guaranteed the death of the insured would not become an unbearable burden for survivors. Large numbers of Americans eventually blended the most personal and familial of trajedies with an ethic making matters of life and death the affairs of stockholders, company directors, and state legislators. Indirectly, insuring lives also facilitated the pooling and diffusion of capital into the economy.

If insuring lives caught on slowly in the early republic, the sales of new policies exploded in the post-Civil War decade. Life insurance was evolving, by mid-century, from an untested means to mitigate the risks of living in the modern world, to a perceived middle-class necessity. Yet in a climate of greater corporate competition by then, new companies became vulnerable to fraud, bankruptcies, and insufficient numbers of new policyholders to survive very long. Murphy’s fast-paced narrative and arresting vignettes brings the early republic rise and post-bellum catastrophic collapse of life insurance into fascinating relief.