The Fragile Fabric of Union: Cotton, Federal Politics, and the Global Origins of the United States Civil War, 1787-1861 (Johns Hopkins Press) written by Brian Schoen. (Studies in Early American Economy and Society from the Library Company of Philadelphia, 2010). 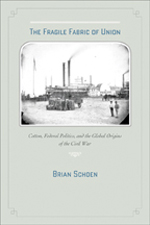 This is the fifth title in Studies in Early American Economy and Society, a collaborative effort between the Johns Hopkins University Press and the Library Copmpany of Philadelphia’s Program in Early American Economy and Society (PEAES). In The Fragile Fabric of Union: Cotton, Federal Politics, and the Global Origins of the United States Civil War, 1787-1861, Brian Schoen traces the bitter legacy of the American Revolution in Georgia and South Carolina, the two southernmost states of the new Union and the region whose identity featured both the most idiosyncratic and the most typically American characteristics of three post-Revolutionary generations.

Through years of rebuilding an economy based on burgeoning world demand for their cotton and rice, expanding their ownership of slaves in the context of unprecedented slave liberation movements and British abolition, and establishing the contours of racial authority on Native American frontiers and slave plantations, the elites of these critical southern states consistently demonstrated how their power depended on solidifying international commercial relations. The domestic economy and society of Georgia and South Carolina depended on their successful commercial position in the Atlantic world. However, as Schoen argues compellingly, Southern partnership in the world of trade was rarely secure during the antebellum years to come; international inflation, shortages of exports, overdrawn international accounts, and the ravages of war and diplomacy were as much a threat to Southern stability as slave and frontier unrest from within. Meanwhile, Georgia and South Carolina state leaders struggled continually to create a satisfactory balance of political power between their states and the federal union; the shifting contours of the Southern political economy both reflected and conditioned the compromises they sought from the national government and their international trading partners. In forging these compromises, myriad Americans increasingly saw how the cotton economy and its reliance on slave labor had simultaneously tied together the political economies of southerners and northerners and set them on increasingly divergent economic paths until the union itself could no longer bear the weight of unworkable tensions.

Schoen’s argument about the fragility of Georgia and South Carolina’s position in the new nation and in the world of commerce is grounded on a sophisticated blending of sources that reveal not only the regional and global economic cultures, but also the ideas set down in the print culture of southern political economists who were keenly aware of the destinies being shaped within the South and more widely in commercial networks throughout the Atlantic world. Schoen brilliantly weaves together the shifting conditions of international economy, regional policy making, contested frontier and planter interests, and the free trade ideology that bubbled to the surface of southern discourses time and again. The expansive canvas on which Schoen works thus offers readers a unique opportunity to understand the place of these two distinctive, yet quintessentially American, southern states in relation to the larger federal union and to global conditions between the Revolution and Civil War.

PEAES is honored to include The Fragile Fabric of Union in this collaborative series. In the Economy Program’s ongoing efforts to reach across scholarly disciplines and methodologies, and in its aims to promote the discussion of the early American economy in the broadest terms possible, Schoen’s intellectually stimulating and deeply researched study is a most fitting addition.