About seven miles north of Avocado, the Morris family shore house located in Sea Girt, New Jersey, is the small town of Ocean Grove.  Founded in 1869 by a group of devout Methodists as a permanent camp meeting location, Ocean Grove became a seaside community devoted to simple living and everyday holiness.  It does not seem as though Marriott C. Morris visited Ocean Grove frequently, however his photographs of Ocean Pathway leading toward the Auditorium and the camp meeting tents show evidence of at least one trip to the seaside town.   Morris’ photos, along with other items from the Library Company’s collection, give a picture of late 19th century life in this unique place on the Jersey shore. 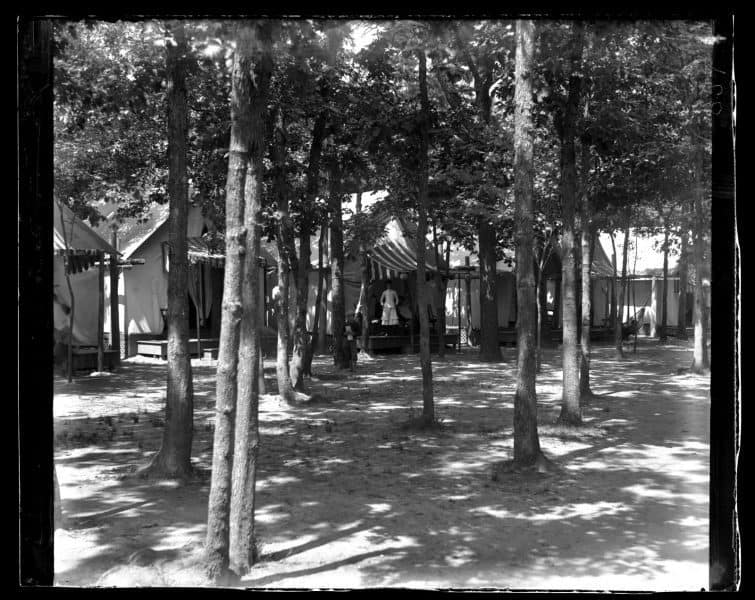 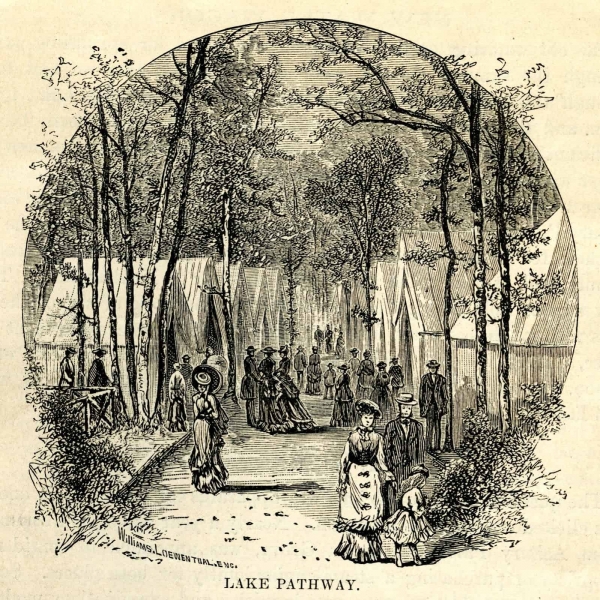 View of the tents from Service by the Sea. Ninth Annual Report of the President of the Ocean Grove Camp-Meeting Association of the Methodist Episcopal Church, 1878

Morris chose to highlight one of the most distinctive aspects of Ocean Grove in his photographs; its tents.  The tents originally provided temporary housing for the attendees of the Methodist revivals but stayed a part of the community even as permanent structures sprung up in Ocean Grove.   In the late 19th century, tents could be found throughout the town and about 100 still remain.  Tent life was extremely popular in Ocean Grove, allowing residents easy access to religious services and the opportunity to live simply.  In the Ninth Annual Report of the President of the Ocean Grove Camp-Meeting Association of the Methodist Episcopal Church, President E.H. Stokes wrote that “tent life at this place instead of losing, increases in interest every year.” Each summer, both when Morris visited and today, tent owners pull sheets of canvas from the shed at the rear of each tent and stretch it over a wooden platform, creating their home for the next few months. 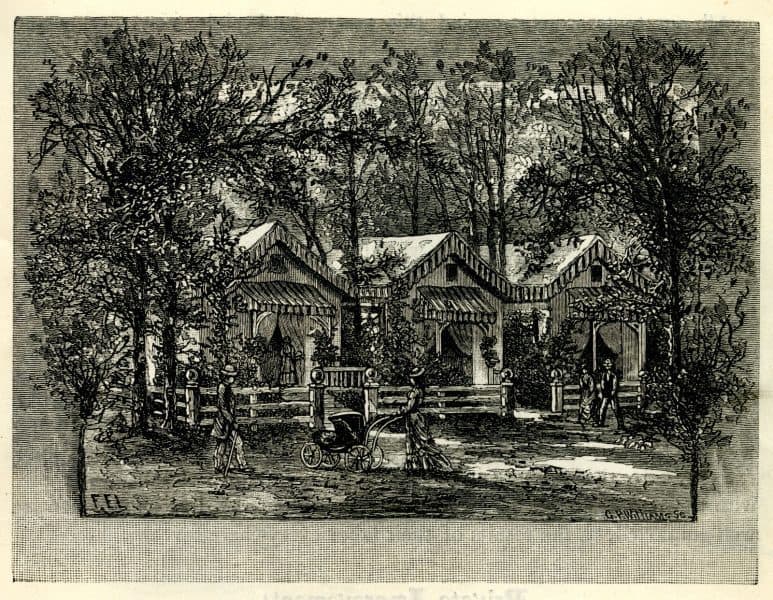 View of the tents from Achievements by the Sea. Twelfth Annual Report of the President of the Ocean Grove Camp-Meeting Association of the Methodist Episcopal Church, 1881

In addition to the camp meetings, its beautiful shoreline contributed to Ocean Grove’s popularity as a summer destination.  A stereograph by Gustavus Pach from the Library Company’s collection shows a crowd enjoying Ocean Grove’s beach.  Bathing attire in the 19th century was significantly more modest than today’s, and this was even more important than usual in a religious town like Ocean Grove where the “improper, immodest and exposed condition” of bathers was discouraged outside of the bathing grounds. 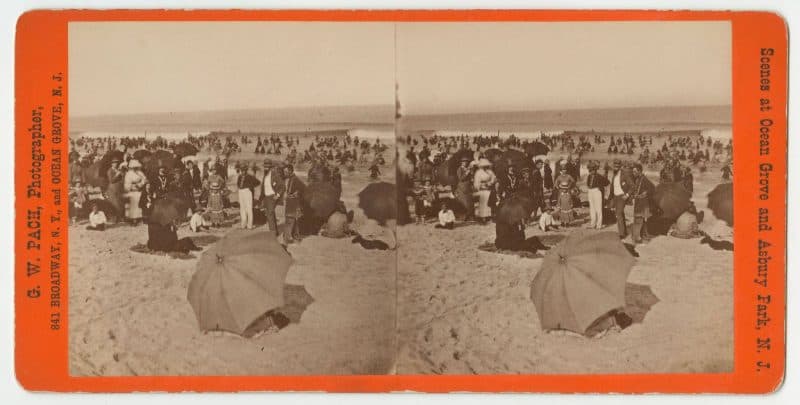 Not every visitor to Ocean Grove stayed in a tent.  Elegant hotels like The Arlington, seen in this image from the 1878 Annual Report, provided more opulent accommodation.  Another stereograph by Pach from about 1877 shows an aerial view of The Arlington with tents in the background.  Standing next to the hotel is W.F. Day & Bros. Ice Cream Garden offering a cool respite from the summer heat.  Undoubtedly, the line stretched around the block in the 1870s as it still does today at Day’s. 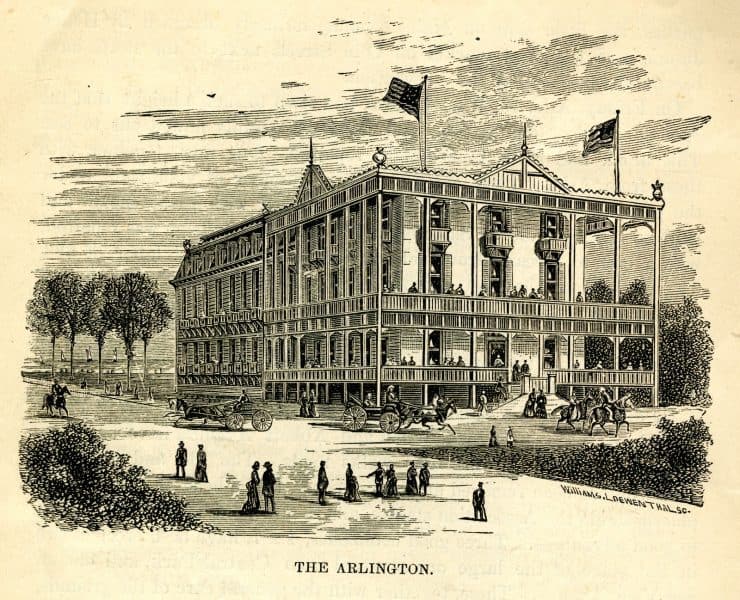 View of the Arlington from Service by the Sea. Ninth Annual Report of the President of the Ocean Grove Camp-Meeting Association of the Methodist Episcopal Church, 1878 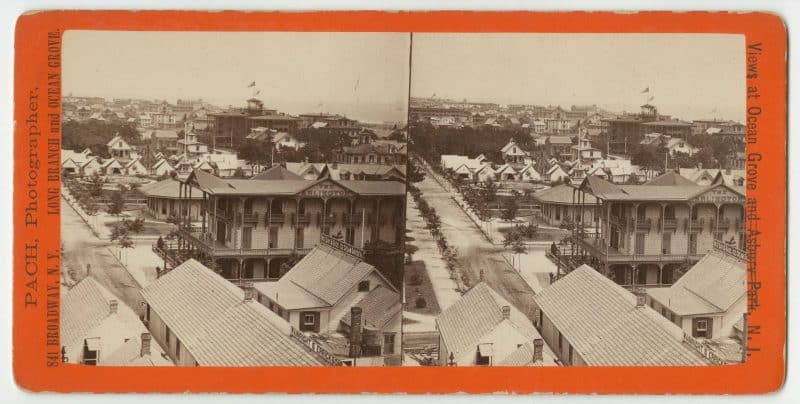 Morris’ second photograph of Ocean Grove shows Ocean Pathway leading toward the Auditorium, where the main worship services for the camp meetings were held.  The Auditorium’s spire is visible beyond the trees, but the building that Morris photographed was not the first Auditorium in Ocean Grove.  As attendance at the camp meeting grew each year, the need for a larger building became more apparent.  The annual report from 1878 details renovations made to the existing auditorium, which included the suggestion of extending the roof to accommodate more seats.  In the Annual Report from 1880, the need for expansion was even more explicit and a new building was proposed on the plot of land north of Ocean Pathway.  This is where the Auditorium was located when Morris visited in 1884, serving as the center of the town, both visually and spiritually. 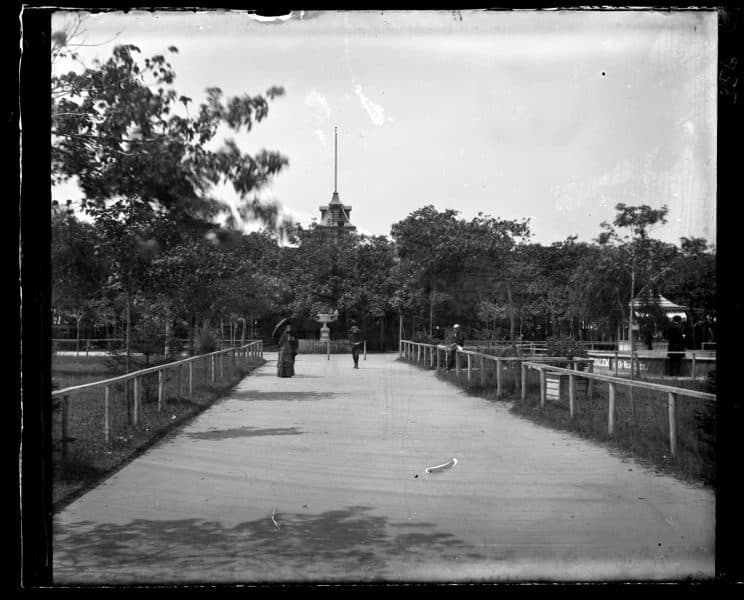