Francis Johnson at the Roots of American Music 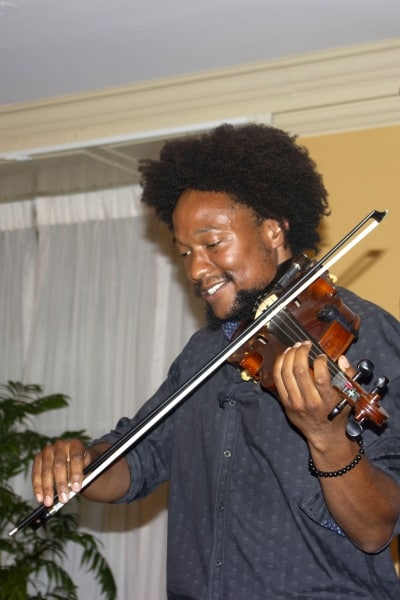 The Program in African American History hosted Francis Johnson at the Roots of American Music with Brian Farrow. Francis Johnson was an early 19th century Philadelphia musician, composer, bandmaster and freeman who helped define the American musical sound. Johnson is the first African American composer noted to have musical compositions published in America, perform for Queen Victoria at Buckingham Palace in England and perform at integrated musical events in the United States. But yet, as an African American man, Francis Johnson’s story was untold for so long despite him being an essential figure at the root of it all! On September 13, 2019, Brian Farrow, noted fiddler, bassist, songwriter, independent scholar and teaching artist shared Johnson’s legacy; how he influenced a generation and why a modern contextualization is imperative to the nation’s musical legacy. According to Farrow, “he is a monumental part of our musical legacy and he deserves to be in every textbook and every classroom in America. But he is totally missing. I want people to understand how his story is imperative to the nation’s musical history and gives more weight to an early African American musical legacy adjacent to minstrelsy.” During this program, Farrow expressed his early interest in Johnson and Johnson’s background and influence to the music field; all while playing a few selection pieces by Johnson that are housed at the Library Company of Philadelphia.

Prior to Farrow’s event, he came to the Library Company to research Johnson’s sheet music including a written manuscript gifted by Dr. James Rush. This manuscript was presented to Mrs. A. Rush by Johnson in the 1820s. Its researchers such as Farrow that bring untold stories to life that are hidden deep within the library’s collections. Dr. Deirdre Cooper Owen states, “as America’s oldest cultural institution, it’s fitting that The Library Company of Philadelphia use music to peel back the layers of history and pay tribute to someone who deserves to be at the forefront, but who has been all but forgotten.” Farrow did just that! He made the notes come alive off paper and provided the audience with a chance to hear the forgotten melody.

Before and After
Scroll to top