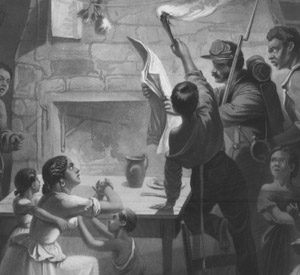 The Program in African American History co-sponsors with the University of Georgia Press its “Race in the Atlantic World, 1700-1900” book series.

Emphasizing comparative and transnational approaches, Race in the Atlantic World, 1700–1900 focuses on the development of, and challenges to, racialized inequality in Atlantic culture, with a particular focus on the Americas. Books in the series explore the evolving meanings of race, slavery, and nation; African identity formation across the Atlantic world; and struggles over emancipation and its aftermath.

Richard S. Newman is a professor of history at the Rochester Institute of Technology. He is the author of The Transformation of American Abolitionism: Fighting Slavery in the Early Republic, Freedom’s Prophet: Bishop Richard Allen, the AME Church, and the Black Founding Fathers, and a coeditor of Pamphlets of Protest: An Anthology of African American Protest Writing, 1790–1860.

Patrick Rael, an associate professor of history at Bowdoin College, is the author of Black Identity and Black Protest in the Antebellum North and a coeditor of Pamphlets of Protest: An Anthology of African American Protest Writing, 1790–1860.

Manisha Sinha is an associate professor of African American studies at the University of Massachusetts, Amherst, and the author of The Counterrevolution of Slavery: Politics and Ideology in Antebellum South Carolina. She is a coeditor of African American Mosaic: A Documentary History from the Slave Trade to the Twenty-first Century.

Books in this series

Flush Times and Fever Dreams
A Story of Capitalism and Slavery in the Age of Jackson
Joshua D. Rothman

The Life and Letters of Philip Quaque, the First African Anglican Missionary
Edited by Vincent Carretta and Ty M. Reese