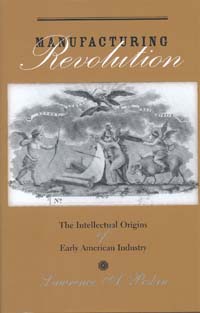 Lawrence Peskin’s Manufacturing Revolution is the inaugural volume in the Series in Early American Economy and Society, a collaborative effort between the Johns Hopkins University Press and the Library Company of Philadelphia’s Program in Early American Economy and Society (PEAES). PEAES has as one of its central goals to further research on the American economy from its earliest times through the antebellum era, and to thereby heighten our understanding of economic relationships by bringing valuable new work to a wide readership. Peskin makes an important contribution to the dialogue that PEAES wishes to engender among scholars of the early American economy.

At the center of the economic changes explained in Manufacturing Revolution are the individuals who imagined, argued about, legislated, and sometimes benefited from the post-Revolutionary generation’s potential for manufacturing a range of wants and needs. Americans of many walks of life entered a protracted and shifting discussion about how to shape the economy; in order to understand the technologies, policies, and market systems that emerged during the early national years, we must pay close attention to the debates, criticisms, and self-affirmations that occurred in interest groups associated with Americans’ emergent manufacturing. By reconstructing this widespread public discussion about the nation’s economic future, Peskin qualifies many of our assumptions about what Americans wanted, and what they were capable of doing in these formative years. Peskin finds deep and early aspirations for national economic independence, rooted in natural bounty and fueled by widespread expectations that the Revolution would create the conditions for becoming a productive, “manu-factoring” people. Optimism continued in the post-Revolutionary generation as promoters, developers, and boosters applauded the advent of internal development and threw themselves into manufacturing efforts. But in reality there was no sudden “revolution” in productive relations, no pervasive introduction of myriad new goods and services. The revolution in thought and policy about manufacturing took place long before capital investment, new class relations, and factories dotted the American landscape. The optimism of manufacturing advocates was tempered frequently with failure.

Indeed, Peskin offers another important insight to our understanding about early manufacturing by finding that much of Americans’ widespread discussion was not about negotiating conflict or identifying economic winners and losers, but about asserting older, traditional understandings Americans still shared about economic bounty leading toward harmonious social relations. This view emerged in the early republic, argues Peskin, in two ways. In the first place, many Americans clung to the belief that large numbers of diligently striving individuals – envisioned not so much as yeomen spreading westward but as clusterings of skilled and unskilled people living in more settled older communities – would easily achieve a classless society in a seamless progression toward satisfaction of both national self-sufficiency and personal material desires. Harmony would arise, in the second place, if the state – whether at the level of national, state, or local governments – assumed the responsibility to aid ambitious would-be manufacturers, whether as individuals or interest groups.

This traditional language about harnessing bounty and manufacturing harmoniously was met serious challenges along the way. First, as the buoyancy of the Revolutionary years gave way to practical efforts to start manufactures during the 1780s, Americans experienced a decade of economic disruption, capital shortages, and persistent efforts by merchants to sink most available resources into commerce. The difficulties of the 1780s then turned, with few exceptions, into sore disappointments for manufacturers during the 1790s, as the Napoleonic Wars riveted merchants’ and farmers’ attention on the quick profits to be had by turning all resources toward international commerce. Not until the eve of Jefferson’s embargoes, and then ever more after its devastating effects on northern commerce, did the practical efforts to start new manufactures rise to the level that the public discourse had advocated for years already.

Yet Peskin is not simply making an argument about the gap between word and deed. Words did make a difference, whether in promoting homespun in the late colonial years, or in protecting infant craft manufacturing in the post-Revolutionary years, or in shaping legal and financial institutions that paved the way for later factory development. Words penned by manufacturers created climates of opinion within their own particular interest groups favoring new enterprise, and in the face of reticent opponents, forced those manufacturers to sharpen their goals and assess their progress toward them. In this, Peskin joins a growing number of scholars who have been striving to recover the beliefs and actions of the first post-Revolutionary generation, and who share the important virtue of insisting that in this era’s sometimes pragmatic, sometimes visionary discussion about manufacturing, there were no necessary or certain outcomes, no clear trajectories toward American industrialization.