This spring the Library Company hosted an event with the Philadelphia chapter of Atlas Obscura whose mission is to inspire wonder and curiosity. I was asked to talk about Philadelphia photographer John Frank Keith (1883-1947) whose photographs of working-class Philadelphians are well-represented in our collection. Back in 2009 we were the fortunate recipient of a Samuel S. Fels Fund grant which allowed us to hire Summer Intern Charlene Peacock to digitize, catalog, and create an online exhibition with the collection. (http://librarycompany.org/keith/).   Spurred by the pending Atlas Obscura visit, I wondered what else there was to learn and impart about Keith and his photographs. Much to my delight, looking at the collection with fresh eyes and with some patient probing through ancestory.com (a source previously not available at the Library Company), I unearthed some new insights into Keith’s life and work.

The accepted narrative about Keith’s life is that he was an eccentric, amateur photographer who wandered around Philadelphia’s working class neighborhoods of Kensington and South Philadelphia. With his camera, he took pictures of the residents as they sat on their front stoops or congregated on the sidewalk. Most of his subjects are not identified, nor are the locations where the photographs were taken. The addresses that are noted, however, are all from South Philadelphia, not Kensington.  Using the resources on ancestory.com to track those few identified, it is possible to trace the close interconnections of the South Philadelphians Keith photographed. 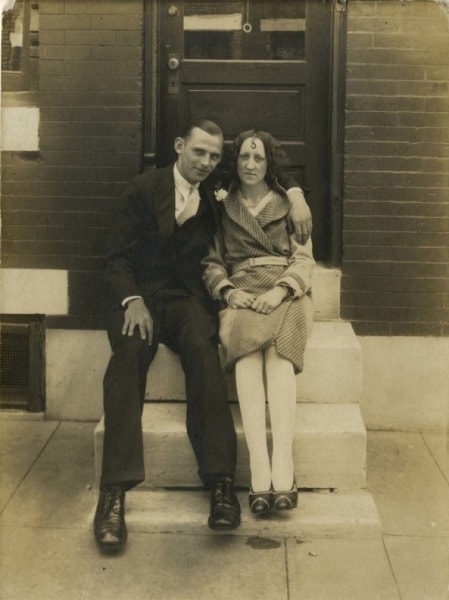 The young man and woman in this image were identified on the postcard as John Rodgers and Mary Schmidt. When we originally cataloged the photograph, we made note that the young woman was wearing what appeared to be an engagement ring. It wasn’t too hard to speculate that Keith had captured a happy soon-to-be married couple. Online research, however, tells a different story. Born in 1912 to Russian immigrant parents, John Rodgers was about 20 years old when he sat on his front stoop with his arm around Mary Schmidt. He shared his family’s South Philadelphia Dudley Street home with his parents and five younger siblings and made his living as a waiter in a restaurant.  Mary, the daughter of German-born immigrants, was about the same age as John and worked in a candy factory. Mary, her parents, and five siblings lived across the street from the Rodgers family. Perhaps there was a broken-off engagement in their future, but John Rodgers was still single in 1940 and when he did marry, his bride was not Mary Schmidt. The happy “couple” in the photograph is most likely neighborhood friends. 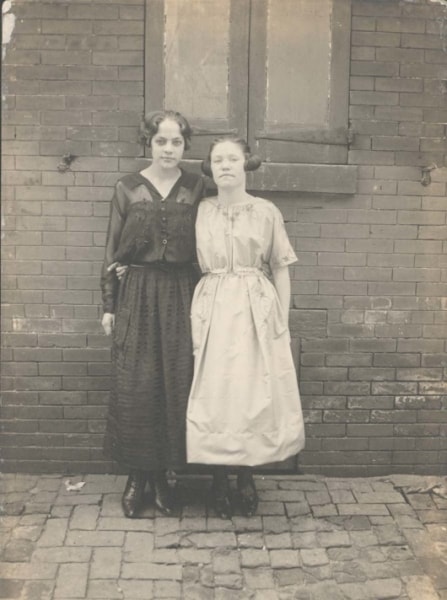 About fifteen years earlier and less than a quarter mile away from where Mary Schmidt and John Rodgers posed, John Frank Keith photographed these two friends identified as Harriet Goodchild and Florence Schlager. Florence worked in a factory, while Harriet labored in a paper mill. Harriet’s widowed mother supported her family as a dishwasher in an oyster establishment. We can speculate that perhaps Keith knew her since he worked as a bookkeeper in an unidentified oyster business. Both these young women married shortly after this photograph was taken. Harriet moved across Peirce Street from her mother and kept house for her chauffeur husband and growing young family. Another photograph in the Keith collection shows three young siblings posed on a stoop, one of whom after her marriage moved around the corner and became one of Harriet’s neighbors on the same block of Peirce Street. If more identifying information was available on Keith’s photographs, an even larger web of connections within this South Philadelphia neighborhood along the Delaware River would undoubtedly emerge.

While ancestory.com has unlocked the stories of some of the people Keith photographed, Keith’s connection to this neighborhood is still not clear. He grew up in a home on North Sixth Street, and even as a peripatetic boarder later in life, never lived in South Philadelphia. We can speculate that perhaps when Keith worked in the oyster business along the Delaware near Walnut Street he took walks down to South Philadelphia along the river armed with his camera and continued to visit this neighborhood even when his work location changed. Keith may have indeed approached strangers as he walked along the streets in front of their homes, but a close examination of the collection indicates that a number of the photographs, such as the two reproduced below, were more likely taken in the courtyards behind the row houses, not on the front stoops and sidewalks. 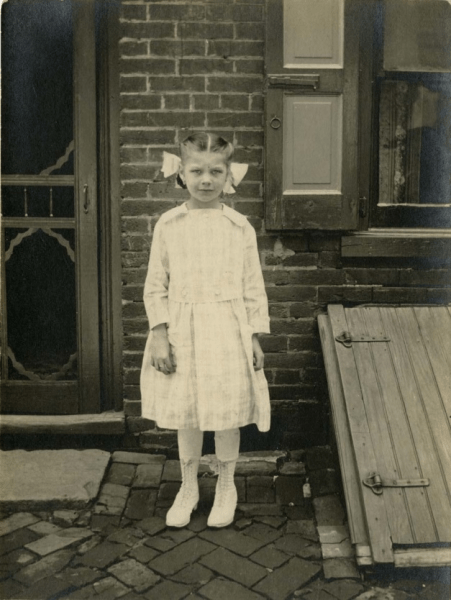 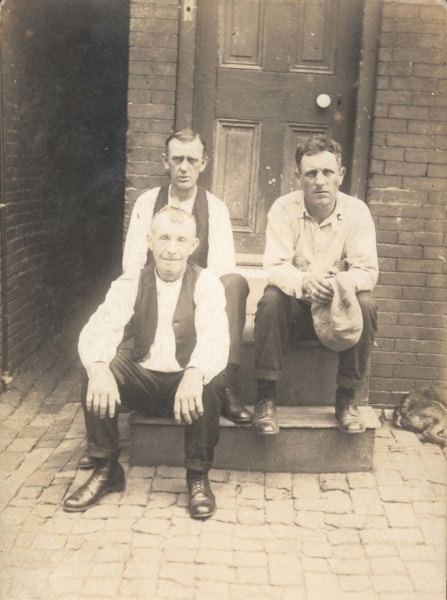 Was John Frank Keith invited into these somewhat more private spaces, or did he merely wander through unchallenged and unimpeded? Either scenario shifts the narrative away from the shy and socially awkward person Keith is usually presented as to someone who may have already had connections with some of his subjects (or their neighbors). Whatever negotiating that may have taken place between photographer and subjects, however, was well worth it. The resulting photographs create an invaluable record of how working-class Philadelphians lived their lives in the early 20th century.