The most dreaded disease in Colonial America was not the black death but smallpox. It came with the first settlers, some of whom had acquired immunity in Europe, and it devastated indigenous peoples, who had none. The mortality rate in some Native communities approached 100%. In Massachusetts, there were perhaps a dozen epidemics in the 17th century. 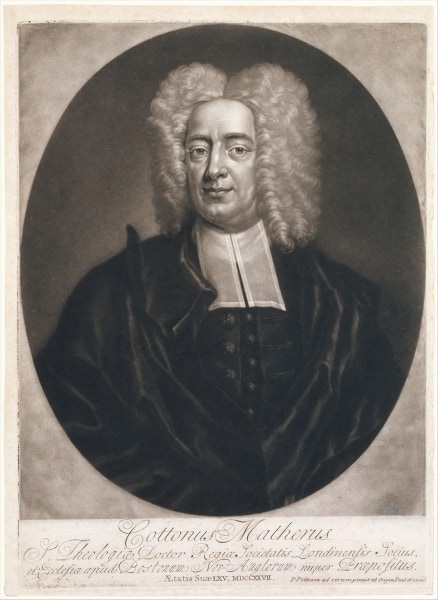 In 1721, after a period of abatement, it struck Boston with renewed force. Cotton Mather had a slave named Onesimus, who many years before described having been inoculated against the disease as a child in Africa. Also, Mather had recently read articles in the Royal Society’s Philosophical Transactions by two Greek physicians describing the same practice in Constantinople. This combination of personal experience with authoritative reports in a scientific journal was enough for Mather to convince Dr. Zabdiel Boylston to inoculate his own son and two of his slaves. A huge controversy broke out in Boston newspapers. Inoculation involved injecting pus from a sick body under the skin, causing a mild case that conferred lifetime immunity. But inevitably a small percentage of those inoculated died or infected others. In this controversy, James Franklin’s New England Courant sided with the doctors, most of whom apart from Boylston were opposed to inoculation, while most of the clergy rallied behind Mather. Ben Franklin worked on the paper with his brother, but that doesn’t mean he was opposed to inoculation. 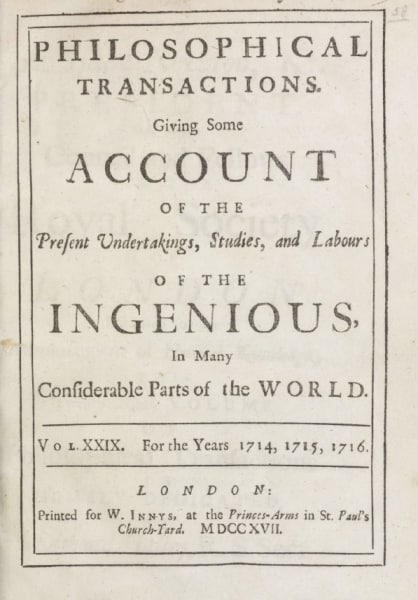 Royal Society of London. Philosophical Transactions, vol. XXIX  (London, 1717).  This is the volume in which Cotton Mather first read about inoculation. 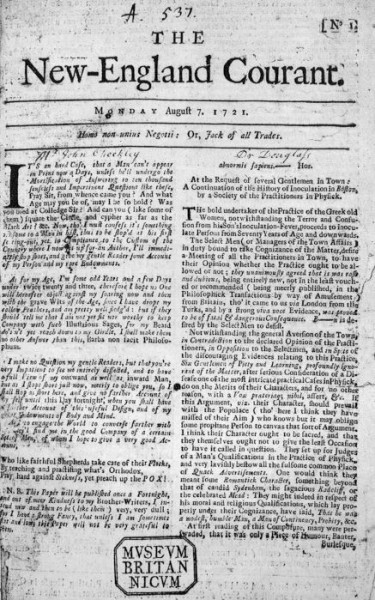 The New-England Courant. (Boston: James Franklin, August 7, 1721).  At the top right is an essay on inoculation, which is attributed to Dr. William Douglass in a manuscript note in the British Library copy. Douglass dismissed the account of inoculation in the Philosophical Transactions that convinced Cotton Mather of its effectiveness, as “being meerly published … by way of Amusement.”  He later recanted his opposition to inoculation when he saw that it worked.

Fifteen years later smallpox killed Benjamin and Deborah Franklin’s much-beloved son Francis. Rumor spread that Franky had died from inoculation, but his grieving father announced in his Gazette that he had intended to inoculate his son as soon as he recovered from a minor illness, but the disease struck him first. Toward the end of his life, Franklin wrote in his Autobiography, “In 1736 I lost one of my Sons, a fine Boy of 4 Years old, by the Smallpox taken in the common way. I long regretted bitterly and still regret that I had not given it to him by Inoculation.” Franklin was among the first to grasp the efficacy of inoculation; He continued to advocate for it in his newspaper and other publications; and Edwin Wolf in his reconstruction of Franklin’s library, found a dozen European books on smallpox, many of them still on our shelves. 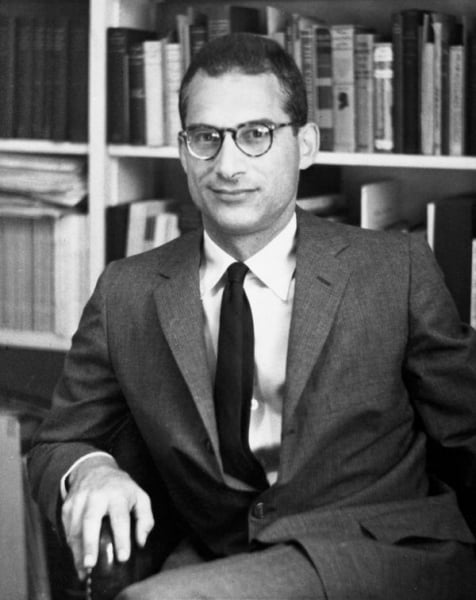 Edwin Wolf 2nd in 1952, shortly before he began his long career at the Library Company. At that point in his life, he had already been hard at work on his reconstruction of Franklin’s library for five years.

During the Revolutionary War British soldiers brought smallpox that caused an epidemic among the American troops. Perhaps Americans were comparatively less immune. In any case, inoculation was as controversial as ever, and still not widely practiced. Washington wasn’t opposed to it in principle, but the problem was it took a week for the soldier to recover from his mild case, during which time he was contagious. That argued for mass inoculation, but that would incapacitate the entire army just as the British were poised to attack. So, Washington ordered a top-secret program of mandatory inoculation for all recruits followed by quarantine before they were sent out to fight; and smallpox ceased to be a threat to the army. Then in 1796, Edward Jenner discovered that cowpox, which generally did not affect humans, would confer immunity against smallpox if deliberately introduced into the body. This was the first naturally occurring vaccine (from vacca, the Latin for cow), and thanks to it, smallpox was gradually eradicated world-wide.

The eradication of smallpox is one of the truly great accomplishments in the history of medicine and public health, and it is an inspiring story, especially today. Yet there are still people in this country who abhor vaccination and do not understand how immunity can build in a population by means of it. The Library Company is full of books and journals that tell the beginnings of this story, including that Royal Society journal that Cotton Mather read and some of the many pamphlets published about the controversy at the time, the most significant of which is Boylston’s own Historical Account of the Small-Pox inoculated in New-England, upon all sorts of persons, Whites, Blacks, of all ages and constitutions. 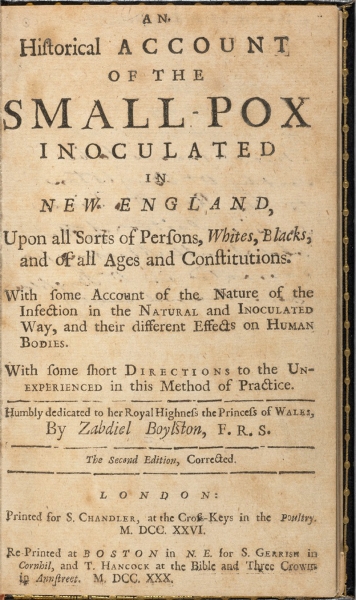 But none of these witnesses moves me as much as those few sad words in Franklin’s Autobiography. The passage quoted above continues, “This I mention for the Sake of Parents who omit that Operation [inoculation] on the Supposition that they should never forgive themselves if a Child died under it; my Example showing that the Regret may be the same either way, and that therefore the safer should be chosen.” Franklin understood the risks of inoculation and perhaps even shared the fears of many parents when he hesitated to inoculate Franky while he was sick. Franklin’s life-long regret was not just for the loss of his son. He never forgave himself for his own failure to fully trust the methods of science that would most likely have saved his life. 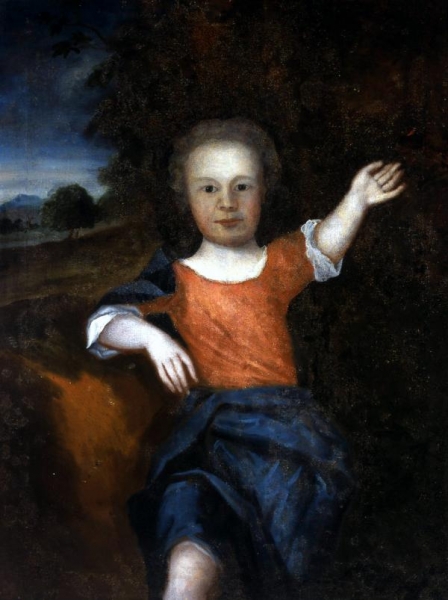 Redrawing History: Taking the Symposium on the Road
Scroll to top