I’m pretty sure we are now well into summer vegetable season, therefore I am making Pepper Hash which can be found on pages 50 and 52 of 35 Receipts from “The Larder Invaded” by William Woys Weaver. Since Dr. Weaver has pointed that some ingredients have changed since the nineteenth century (52), bell peppers, for example, are considerably larger, I will be using his recipe rather than the 1855 original. 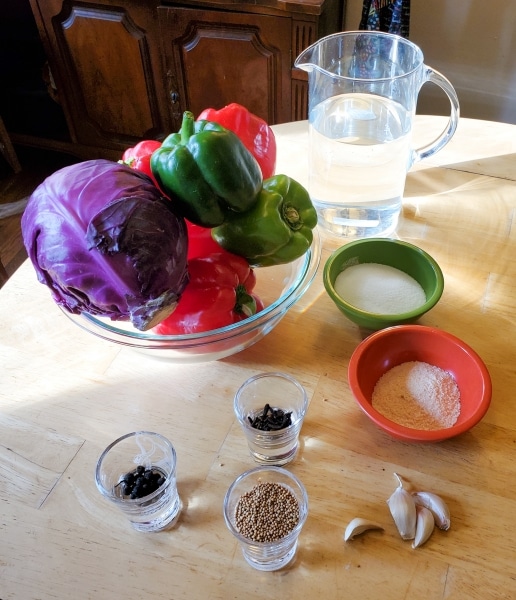 ½ cup sugar or more to taste

optional 4 cloves garlic, sliced in half

*I get “ugly” produce delivered, and this week I got bell peppers in “mystery” colors. It’s the same species, so I’m just going to operate under the assumption that four red peppers and two green peppers will work just as well as six green peppers.

**My grocery store did not have pickling salt, so I bought kosher salt instead. The internet assures that it’s just as good.

Shred the cabbage paper thin, and scatter salt over it. 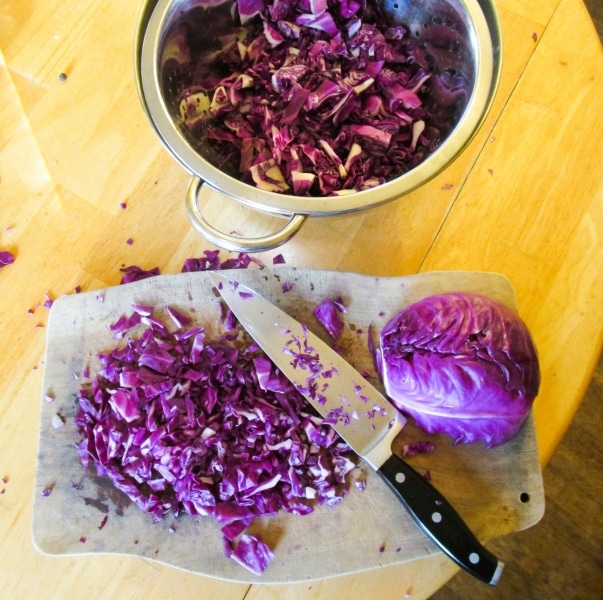 I might have a somewhat broad definition of “paper thin.”

Stand in a colander and drain overnight. 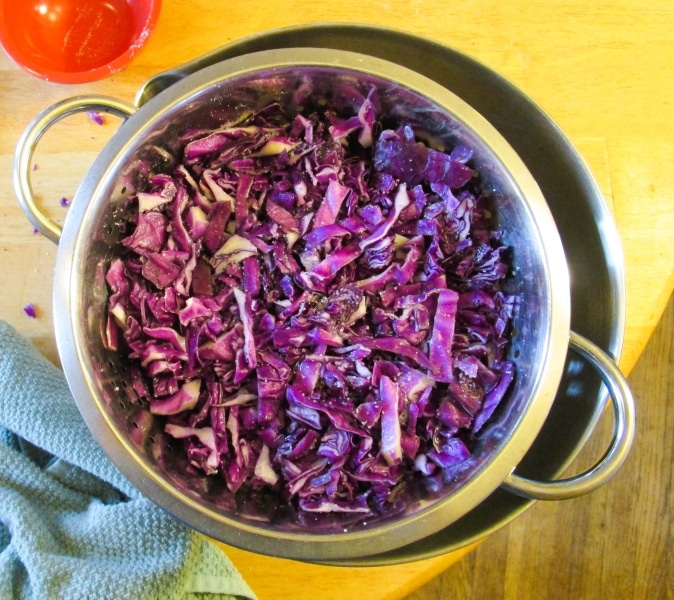 At the same time, make a cloth bag with clean linen or cheese cloth and fill it with the mustard, clove, and allspice. Bring the vinegar to a hard boil, add the bag and boil 5 minutes. 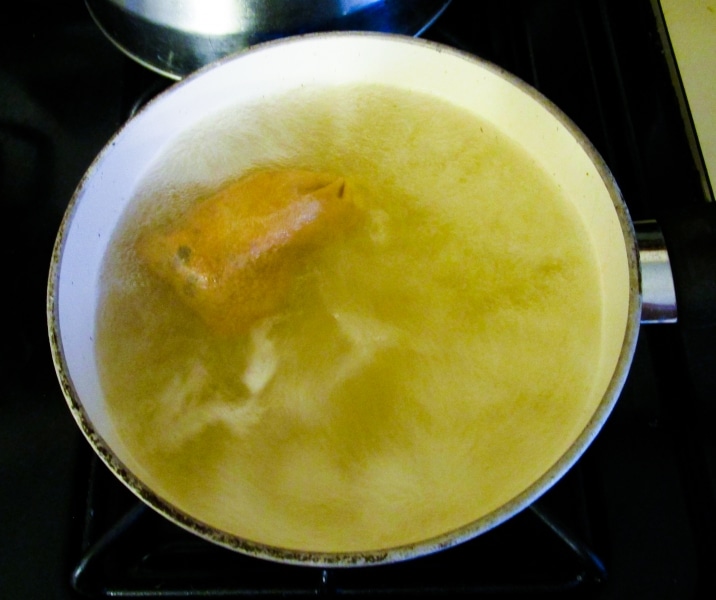 Then add the garlic (optional). 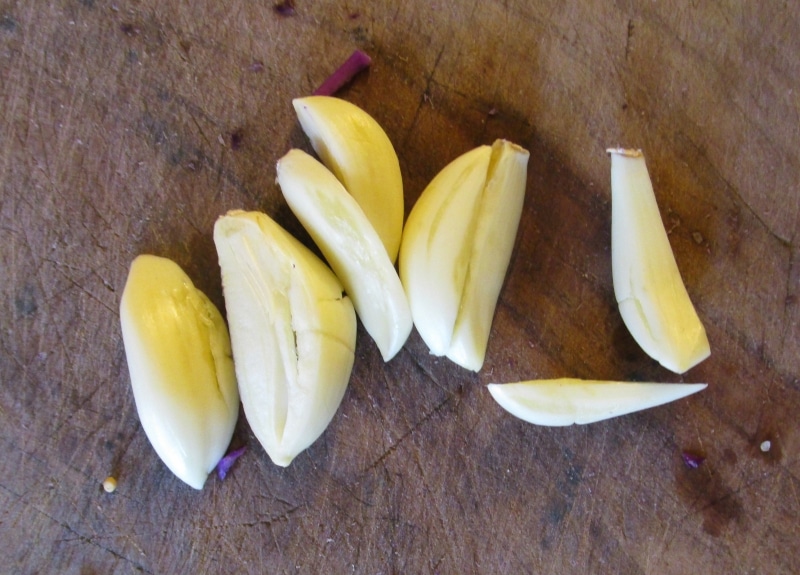 No, not optional. Garlic is delicious. One must always add the garlic!

In the morning, remove the bag, and the garlic from the vinegar, and rinse the cabbage twice. 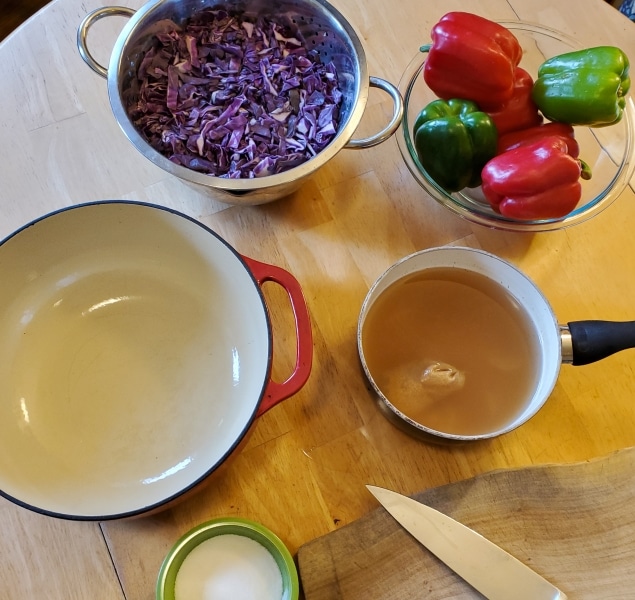 It might be a little hard to tell, but the cabbage has shrunk down, and look how much darker the vinegar has become.

Mince or chop the peppers after removing the veins and seeds, and mix with the cabbage. 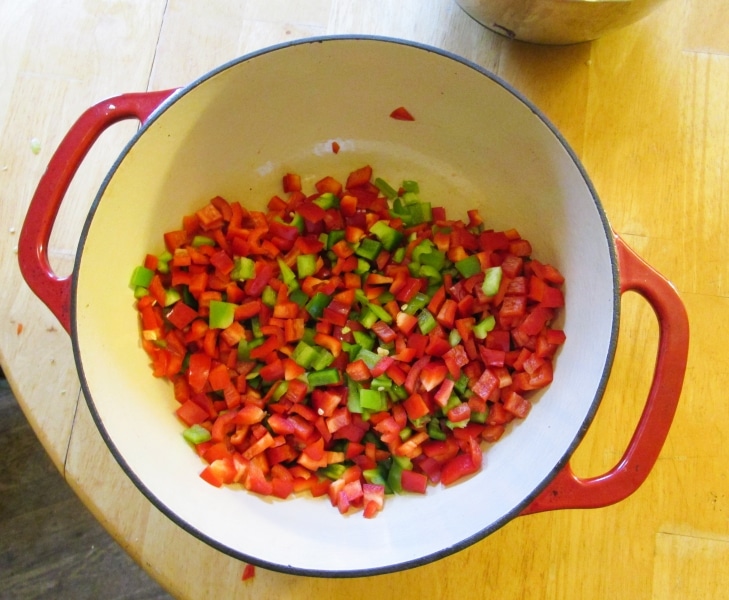 You may have guessed by now that I’m going with chopping the peppers, not spending time mincing.

Bring the sugar and vinegar to a boil, and pour over the cabbage mixture. Stew this in a preserving kettle for 10 minutes; 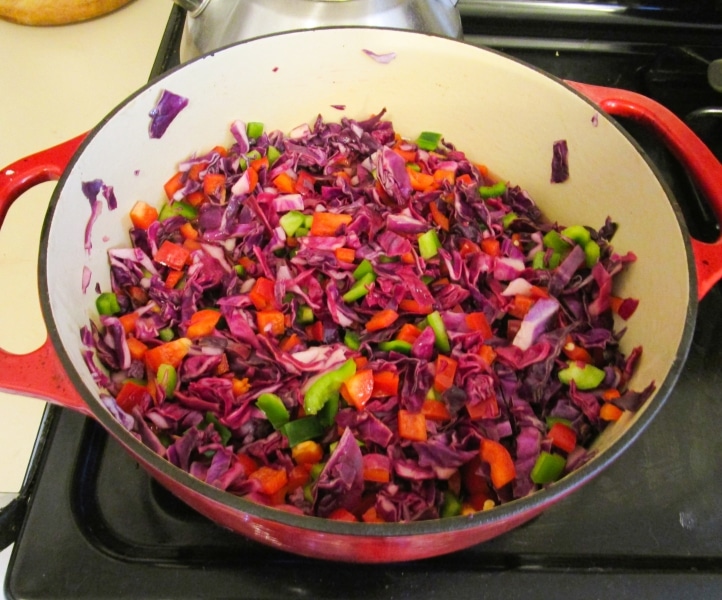 Then pack in hot sterilized jars. Give the jars a 10 minute water bath, or let the pepper hash cool and store in a glass container in the refrigerator until needed. It should keep two to three weeks under refrigeration. Yield: approximately 4 pints.

I do not have enough glass containers to do the job, so after a quick taste (it tastes mostly like spiced vinegar at this point), I toss the hash into some of my trusty, quart size take-out containers with a little added water to cover. I have learned my lesson from the pickled cabbage.

After giving the pepper hash a few days to marry flavors, it’s time for another taste. It’s pretty good and somewhat similar to the pickled cabbage I made recently. I’m going to be pretty well stocked in pickled condiments for a while…

Dr. Weaver recommends eating pepper hash with fish, but today, I am opting for hot dogs. 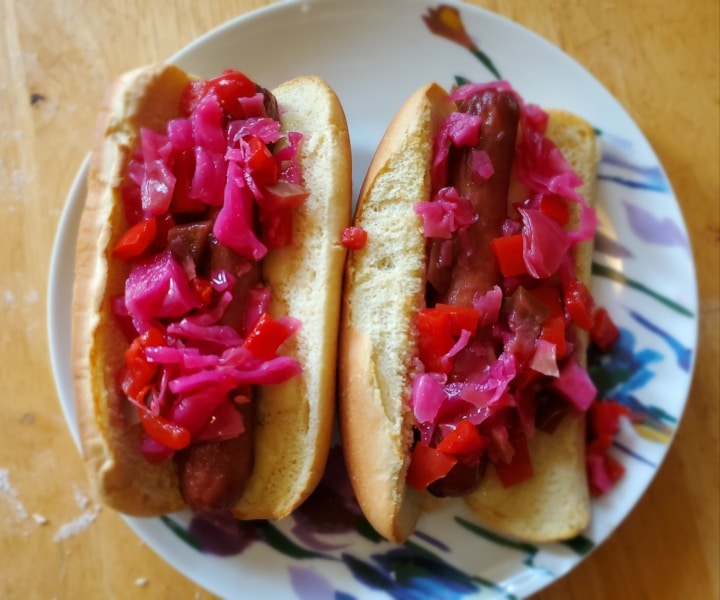 Now this is a perfect combination.

Next time, a return to desserts with Barnard Cake.